Raymond Carver was a short story writer who was born in the Pacific Northwest. He was a textbook editor, lecturer and teacher while writing. His stories featured some of his trademarks of, alcohol, poverty, and people in real life situations. Carver was influenced to write about these trademarks through experiences he had lived and influences that were brought upon him, like alcoholism and divorce. Raymond Carver and his father were alcoholics and had both been divorced and remarried through out their lives which is why alcohol, divorce, and fading love are some of the biggest themes he incorporates in his stories.

Don't use plagiarized sources. Get your custom essay on
“ Raymond Carver ”
Get custom paper
NEW! smart matching with writer

Raymond Carver also expresses puzzlement about the odd and battered condition of love in his profound themes. Specifically in his two short stories, “What We Talk About When We Talk About Love” and “Popular Mechanics.”

As a writer Carver always tried to add some aspect of intensity or menace in his work. He was known as a literary minimalist because he likes to shorten sentences by removing words or phrases.

This writing technique he uses creates a sense of uncertainty in the sentences and leaves the reader guessing. Minimalist writers like Carver, won’t tell you exactly what to think through their diction, instead, they leave their work open ended so the reader can participate in the interpretation of the story and fill in the blank themselves. Carver even says in one of his books called “Fires”: “I like it when there is some sense of menace in short stories….

there has to be a tension, a sense that something is imminent….” ( Fires 17).

Carver creates that state of uncertainty in “What We Talk About When We Talk About Love” when the four characters are conversing amongst each other about love. Terri and Mel tell stories about their past marriages. Mel had a very demanding wife while Terri was involved with a guy that abused her. The conversation in the room gradually becomes quieter and quieter as they continue to talk about love and drink gin. Mel says to Terri: “Just shut up for once in your life, Mel said very quietly. Will you do me a favor and do that for a minute?” (What We Talk About 146) Sentences like these seem out of place in a conversation about love, and because of those lines Mel and Terri’s relationship seems unclear and uncertain. The entire story revolves around a certain speech or passage by Mel.

“What do any of us really know about love? Mel Said. ‘It seems to me we’re just beginners at love……..Am I wrong? Am I way off base? Because I want you to set me straight if you think I’m wrong. I want to know. I mean, I don’t know anything, and I’m the first one to admit it.” (What We Talk About 144-145) Fred Moramarco, a professor at San Diego State University, wrote an article called “Carver’s Couples Talk About Love” and said:

“When I read this passage in my class, my Southern California students, nearly all of them from families that have experienced divorce, both understand it and are bewildered by it simultaneously. Which is to say they recognize it as the contemporary world they live in, a world of serial relationships where one year’s love is the next year’s courtroom adversary.” (Carver’s Couples Talk About Love-Moramarco) This article is beneficial in explaining and showing how relationships can be deceiving and not always straight forward. This is an other example of how Carver’s condition of love puzzled Moramarco’s students even when they understood it.

Raymond Carver underlines the confusion about love with two motifs. He uses his structural element or symbolic structure in his story through things like alcohol and light. Carver uses a symbolic structure in his work that he excepts the reader to make sense of. He uses symbolic images like metaphors to help add to the interpreting the story. In the first paragraph of “What We Talk About When We Talk About Love” Carver says: “Sunlight filled the kitchen from the big window behind the sink.”(What We Talk About 137) Which is a symbolic comment because as the characters talk about their experiences with love the light that once filled the room is gone and the story ends with: “Not one of us moving, not even when the room went dark. (What We Talk About154)

These lines show that as the characters keep drinking they start to think, and realize the complexity of love until they figure out that love is not as straight forward as they think. Carver again links alcohol and light when Nick says: “Maybe we were a little drunk by then. I know it was hard keeping things in focus. The light was draining out of the room, going back through the window where it had come from. Yet nobody made a move to get up from the table to turn on the overhead light.”(What We Talk About 152)

The transient love that the characters experience is short and it makes them feel that they have arrived somewhere, but really they have not accomplished much. As the story progresses and the characters keep drinking, they talk more and more about love. Also as they talk about their experiences with love it becomes clear to them that they do not know as much about love as they thought they did. The stories conclusion hits the characters with a sense of reality. All the gin is finished and Nick and the readers hear the sound of four human hearts beating in the darkness: “I could hear my heart beating. I could hear everyone’s heart. I could hear the human noise we sat there making, not one of us moving, not even when the room went dark.” (What We Talk About 154) Raymond Carver uses the same symbolic structure in his short story, “Popular Mechanics.”

He uses the same symbolic structure again when the weather outside is dark and he says: “But it was getting dark on the inside too.” Sentences like these make the reader believe that there is something wrong in the relationship. The details Carver uses helps the reader interpret so many images and help the reader piece together the big picture. Also it is very obvious to see that the man and women are unhappy just by their attitudes towards each other. The couple argues about who will take the baby to the point where they are both pulling on it. By showing the couple arguing immaturely, Carver tries to show that they are far from happy. He lets us know this through his extreme detail in his symbolic structure.

It is essential to look for these symbolic elements to understand the meanings of Raymond Carver’s work. Carver is known for his minimal writing style, simplified language, and irregular plots. His writing style helps capture the experiences and emotions his characters face, which often include guilt, grief, hopelessness, and the effects of fading love. Also his common themes are a response to his history involving the influence of alcoholism and divorce with himself and his parents. In “What We Talk About When We Talk About Love” Carver hints puzzlement and confusion about love through his symbolic lines about alcohol and light, along with expressing the confusion more clearly through certain passages his characters say like Mel’s speech. However in “Popular Mechanics” Carver shows it by using great detail, symbols, and through the actions of his characters. 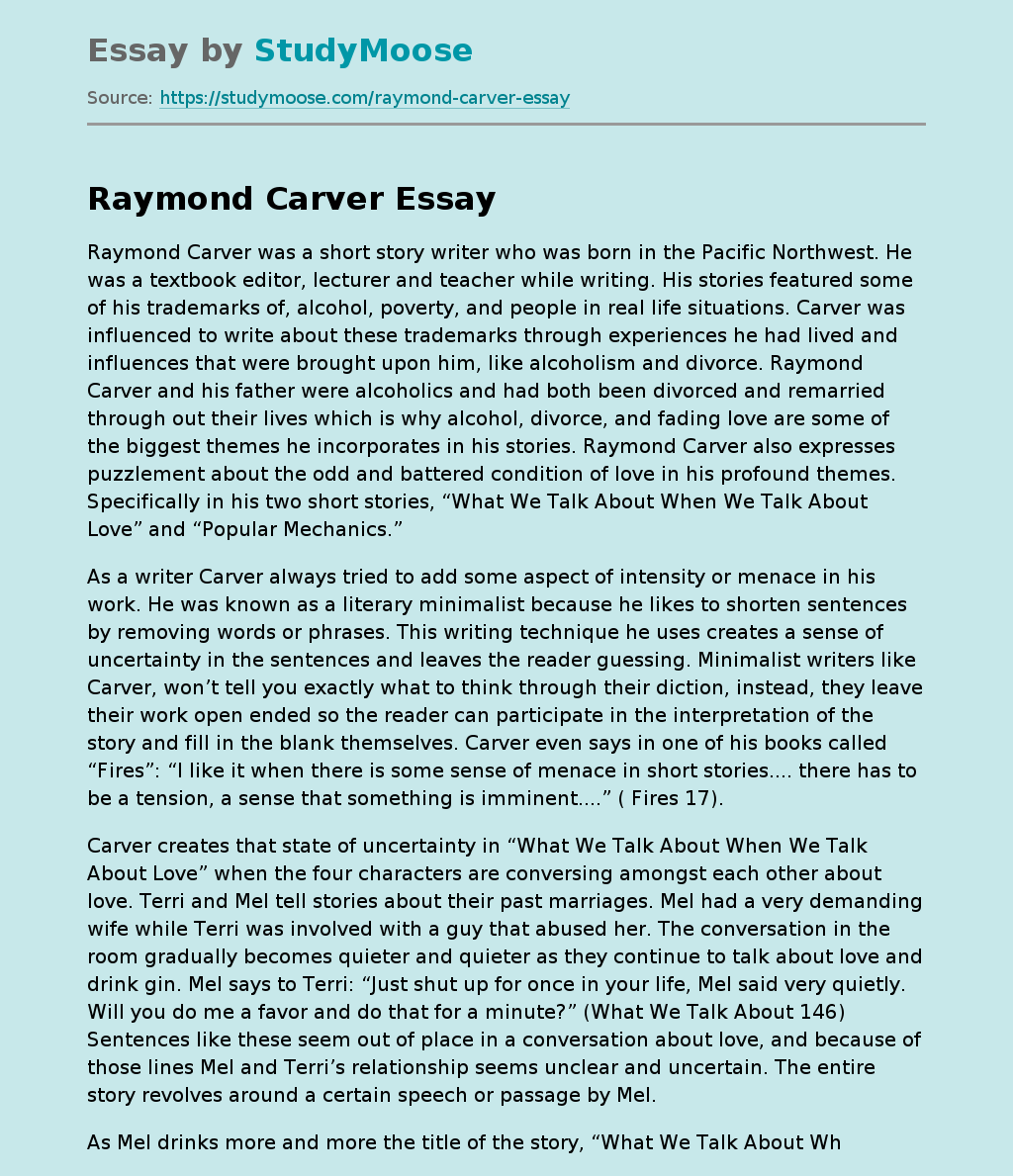