What kinds of products and technologies does Benson Metals use?

How have these been changing recently? Benson Metals, a medium-sized maker of specialty steel products, has traditionally used a craftsliketechnology to produce a variety of metals. In terms of Perrow’s model of technology, task variety andtask analyzability are low, as there is still guesswork, skill, and even some “black magic” inmanufacturing products. Benson also produces metals in very small quantities—pounds not tons—so thatin terms of Woodward’s model it is small batch, and the skills and knowledge of production people aremore important than machines in getting the job done—task complexity is low.

Don't use plagiarized sources. Get your custom essay on
“ Ramrod Case Questions and Answers ”
Get custom paper
NEW! smart matching with writer

Recently, the company has moved into making sophisticated and technically difficult steels for theaerospace industry. Not only are they difficult to produce, these steels require more research skills,metallurgical analysis, and delicate handling in all stages of production. They are produced to verystringent specifications. In terms of Perrow’s model, task variety has increased and task analyzability hasfallen—production is more nonroutine and research oriented and depends more on the skills, experience,knowledge, and judgment of production personnel.

Companies cannot imitate these skills, so they form acompetitive advantage. The environment surrounding the company has changed to more uncertainty because a new range of products is manufactured. Both technology and environment have changed,affecting the contingencies facing the company, and increasing potential risks and returns.

What problems is Benson Metals encountering as it changes products and technologies?

An increased level of conflict between sales and production poses a problem.

Production is responding tothe new pressures facing the organization, yet it is continually fighting with sales. Sales wants a rapidresponse to unexpected customer requests or tries to discover production’s plans or when the finished product will be ready.Morale is falling as the effects of these conflicts spread. Managers in different functions are taking sides,usually siding with sales against Ramrod and production. Communication and decision-making haveslowed as a result of uncooperative attitudes. Integration between functions is falling. This is dangerousfor nonroutine technology that requires a high level of differentiation and integration to be effective.

What is causing these problems in Benson Metals?

The sources of the conflict can be isolated. Keep the discussion focused on the people, principallyRamrod, and examine what he is doing wrong; this approach makes the later analysis of power moredramatic.The attitudes and behavior of Ramrod Stockwell cause the problem. Although he is competent, he causesconflict within his own function and other functions. In his own function he fails to delegate authorityand keeps the reins of power in his own hands. He has a centralized management style and does not shareinformation, which makes it impossible for subordinates to provide salespeople with the information theyneed. He does not follow the chain of command; he goes to people only when he needs them. Violatinglines of authority reduces the authority of his managers and also leaves them uninformed.His attitudes affect relationships with other functions, especially sales, because he also does not allowsubordinates to share any but routine information. Because of the centralization of authority in production, subordinates do not possess information. Only Rob Bronson, the vice president of sales, canget information from Ramrod, and he is too busy to do so (and too proud since he would have to admit 232

dependency on Ramrod). Stockwell says something can be done but fails to provide an accurate timeframe, making planning difficult for sales and other departments—making them dependent on Ramrod.Ramrod is a “rough diamond” and has little social contact with other top managers at Benson Metals,which further isolates him. Managers have suggested sensitivity training to help him better communicateand delegate.The conclusion is that Ramrod is the problem—his attitudes and values. What is the solution? FireRamrod? After the pros and cons have been considered (the firm would lose his valuable skills andexpertise), the instructor can turn the discussion to the issue of the company power structure; studentsrarely raise this issue. 4.In the past, which function has had the most power in Benson Metals? How has the power relationship between production and sales been changing recently? Traditionally, sales has enjoyed most of the power:

The traditional power of sales reflects the fact that in the past, the main contingency facing Benson wasto sell its products in a competitive market against four or five other companies who compete for thesame customers. In this environment, developing customer relationships and servicing customers is veryimportant. Recently the environment has changed and production has become more important—only production can produce the kinds of steels customers want. In the new competitive environment:

Even though the power of production is increasing, Benson’s internal power structure does not reflectthis change. Rob Bronson, the sales manager realizes the change but deliberately avoids a change in thestatus of sales, and the result is conflict.The message is that maybe Ramrod is not the problem; it is Benson’s unchanged internal power structurein a changed environment. Ramrod’s attitudes and behaviors seem logical once it is understood that hewants to increase his function’s power and status in the organization:

This increases his power and makes himnonsubstitutable.Ramrod, consciously or unconsciously, is withholding information to increase the dependence of otherson him and to change the balance of power in his favor. A strong CEO would understand this and might 233 publicly recognize the importance of production and correct the imbalance. The chairman and his son areweak and the president is from sales, so nothing is being done. The level of conflict is escalating as salesfights back. Suggest some ways to try to solve the problems the company is experiencing. What would be a good strategy for change? There are several ways of increasing the power of production vis-à-vis sales. 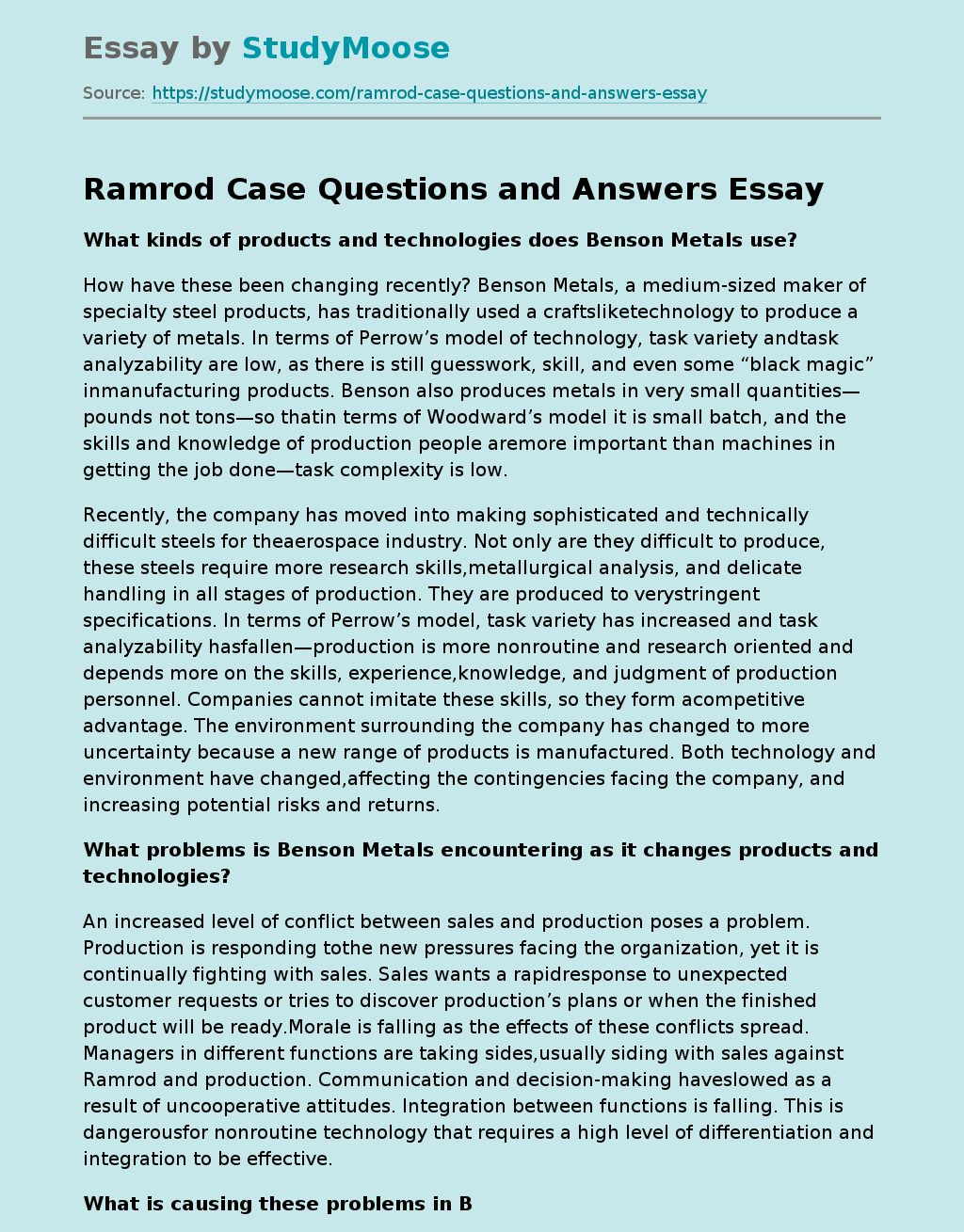