Raise the Red Lantern (1991) directed by Zhang Yimou was based on a novel called Wives and Concubines by Su Tong. This film takes place in the early 1900s which tells the story of a woman named Songlian (played by Gong Li) who was struck by the harshness of reality. Her father died during the Chinese Civil War when she was nineteen. Facing the death of her father and the severity of the family financial situation, she was left with no choice but to marry the wealthy Chen family.

Don't use plagiarized sources. Get your custom essay on
“ Raise the Red Lantern by Zhang Yimou ”
Get custom paper
NEW! smart matching with writer

Upon arrival to the Chen’s estate, Songlian was greeted with open arms and was treated like royalty. She later came to the realization that it was just a mere fantasy as she experience more of the traditions and rules set by the Master Chen. The Master has four mistress, Songlian being the fourth, and all was in competition with one another for the master’s affection and attention. Each mistress has her own quarter in the castle and her own personal servant.

The routine on a daily basis was to stands in front of their quarters and awaits the Master’s decision on his sexual needs. Once his decision is made, the quarter of the mistress chosen was lit up with red lanterns. For that day, the chosen mistress is rewarded with foot massage, meal of her choice, and the respect of all the servants in the estate. At first glance, Songlian finds Zhuoyun, the Second Mistress, to be trusting and kind.

She laters found out that Zhuoyun was said to “have a face of the Buddha, but the heart of a scorpion.” Songlian, yearning for her husband affection, decides to fake her own pregnancy. Yan’er backstabbed Songlian by revealing the bloodstain undergarment to Zhuoyun. Feigning her concern for Songlian’s pregnancy, the second mistress requested the family doctor to examine Songlina’s condition.

Infuriated by Songlian’s deception, the master ordered all the red lantern in her quarters to be covered by a black canvas. As an act of revenge, Songlian revealed Yan’er secret obsession with the master and ordered all the red lantern in Yan’er’s room to be burned. Yan’er’s refusal to apologize to Songlian kneel all night which eventually led to her death. During Songlian’s birthday, she drunkenly professes the Meishan, third mistress, affairs with the family doctor. Being manipulative as she is, Zhuoyun caught the third mistress and the doctor in the act of adultry. As punishment for infidelity, Meishan was hanged. The following summer, the master marry yet another concubines. At this point, Songlian has finally went completely insane and was just wandering around in her own quarters.

In order for this film to be called a Classical Hollywood Narrative, it must adheres to the four simple stages in which this narrative composes. First stage, the hero, is established clearly at the beginning revealing his/her strengths and flaws. This film adhere to the first stage in which it did reveals who is the main protagonist at the very beginning. However, it is very hard to determine whether Songlian is actually a hero in this film. At the beginning, it did shows that her motive is very admirable in accepting her fate in order to save her family from poverty. As the story progresses, in my opinion, she is reveal to be weak and unforgiving. Her weakness shows in her selfishness as she yearn for affection and attention. Her unforgiveness shows when after her deception was reveal in her pregnancy.

She became very vengeful and it causes the death of Yan’er and Meishan. For those reason, it is hard for me to consider her only as a protagonist. Instead, I see her as protagonist with the negative traits of an antagonist. Second stage, the goal, is established for the protagonist to pursue. In this case, Songlian’s goal is to become a concubine to a wealthy family to save her family from poverty. The success of this goal is very simplistic. Although her long term goal is unclear, the sense of belonging is very clear. Clearly Songlian did not want to live a life as a concubine. She does belong here, but her fate is inevitable.

Third stage, the obstacle, can be established as the lifestyle of the concubines and upholding the traditions and rules set by the master of the house. Unlike most obstacles which has a clear time period of resolution, the obstacle in this film appears to be never ending. Final stage, the success, is established when the protagonist finally achieve his/her goals and overcome the obstacle with great success. Unlike Classical Hollywood Narrative, the ending to this film left the protagonist’s problems unresolve and distraught. She just went insane and became mentally ill at the end. That is a complete failure for a hero of a narrative. I believe a better way to become successful in this film’s obstacles would be death because it is the only escape for the fate a concubine. 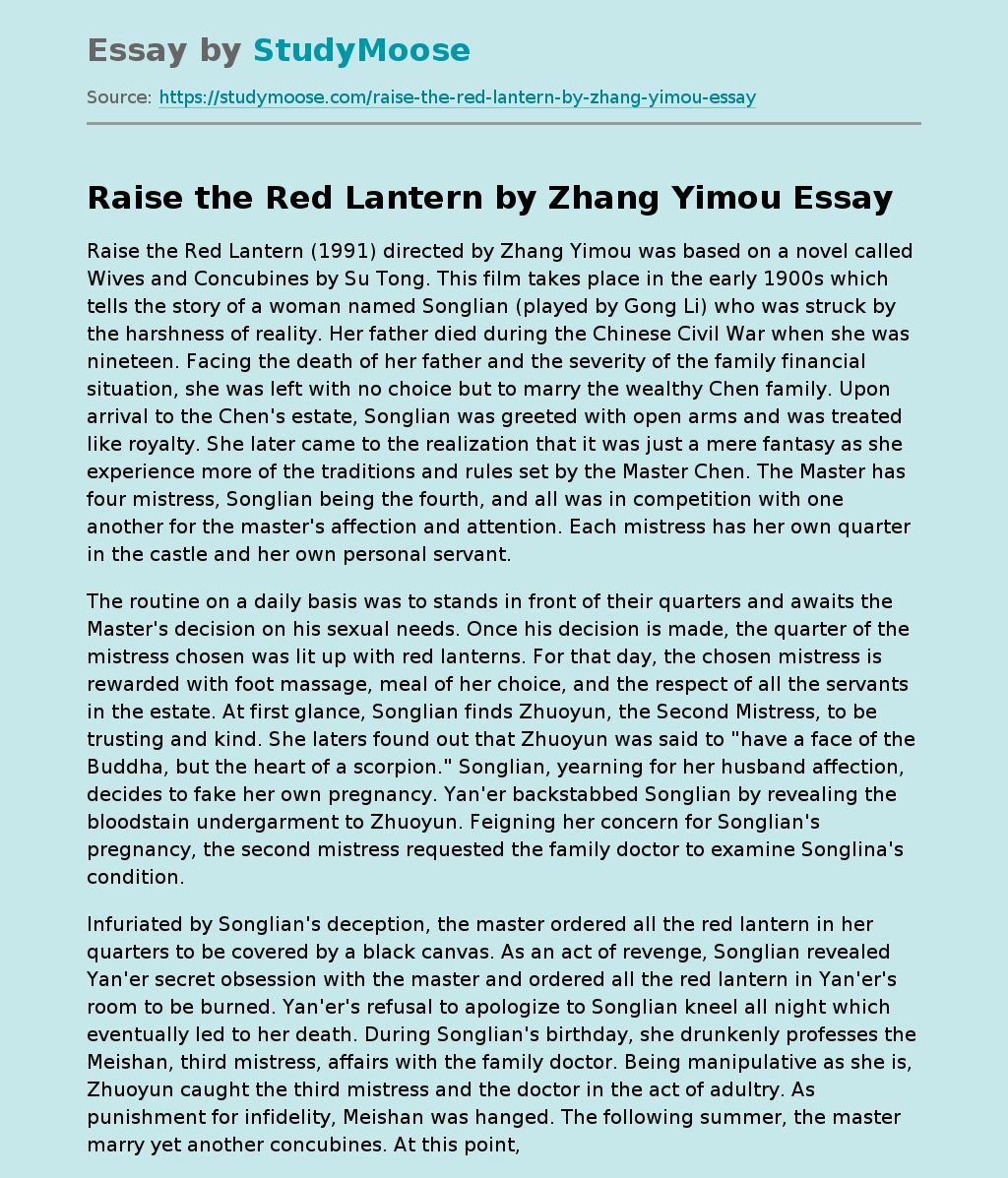