*80% of the ancient forests have been destroyed

*only 20% of the ancient forests remain intact

Over 1 million people moved into the forest all these people cleared parts of the forest to grow crops on since the trees grew so well they thought it would do the same for the crops.

Don't use plagiarized sources. Get your custom essay on
“ The rainforest is being exploited this means that it is not being used properly and is being taken advantage of ”
Get custom paper
NEW! smart matching with writer

This didn’t happen though the crops drained the ground of its nutrients and the nutrients were never replaced so in the end the crops didn’t grow anymore so the people just moved on destroying more forest. The forest that was left behind could never recover and grow again so it will end up like a desert.

The roads that got built that went through the rainforest and deep into it. Most people that lived in Brazil agreed to the roads.

The roads were going to connect all the main cities together and would make easy access for raw materials.

The main materials that the people want are the most expensive so these would be teak and mahogany these would most probably be sold to rich countries. Most of the wood is logged by big multinational companies.

Mining also is used in the rainforest this is done by massive international companies iron ore; bauxite, gold, and many other valuable metals are dug up.

Carajas is the biggest mining area in the forest.

Big companies bought land to raise there cattle on. They use a burning technique where they just burn the forest down this was a much faster way of doing things. This also had the same effects as growing crops the land is left almost desert like after they have used it.

The rainforest can also be used to make fuels.

The forest is also used to make charcoal which is a very cheap and quick way to get fuel since they can use it to power the trains taking materials they may also use it in iron smelting where they burn 5 tonnes of trees in 5 minutes.

The government built a dam this provided power for the cities and was also very cheap to run. The only problem with them is that they cost billions to build and may also cause flooding. They have 79 more dams in planning for the forest.

Europeans arrived in the Amazon there were an estimated 6 million Amerindians. Today, there are only about 300,000. The remaining Indians are forced to live in reservations or to become “tourist attractions.” Among humans, the Amerindians have the oldest claim to the rainforest; they have lived in harmony with the forest for longer than any other civilization.

But not all of this is bad. Even though the forest is being destroyed the people that live there are getting money to make their lives better. The country Brazil is getting money so it can make the country better they can build new hospitals build new houses for people and make living in Brazil a lot better. The dams that were built might mean the flooding but it gives the country cheap power so factories will open up there which will give jobs to the locals.

The rainforest is being exploited this means that it is not being used properly and is being taken advantage of. (2020, Jun 02). Retrieved from https://studymoose.com/rainforest-exploited-means-not-used-properly-taken-advantage-new-essay 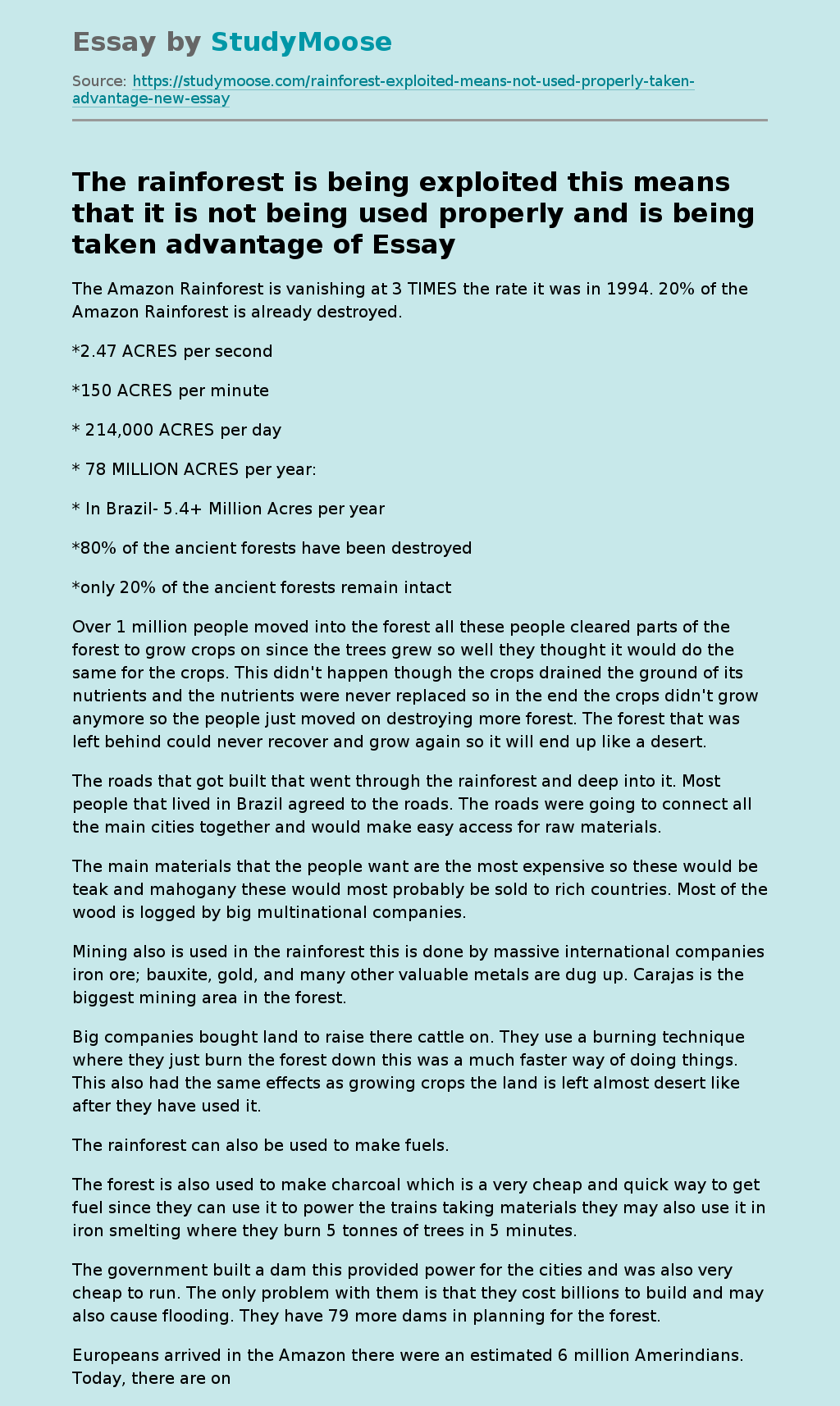