A child’s life has many milestones such as learning to walk, learning to talk and their first day at school. Throughout all these stages parents are obliged to provide guidance, safety and support for their children as they learn to interpreate the world for themselves. Christine Jeffs’ visual text, Rain explores the story of thirteen year old, Janey whose parents are so caught up in self-absorption, they neglect their parental roles to both Janey and her younger brother Jim.This up-bringing of Janey and Jim leave the audience pondering, Does the abandonment of morale parents roles shape a childs transition into adolescence? The consequences of neglecting Janey through her first steps into womanhood, ricochet on Janey’s parents, and damage her perception of the adult world eternally.

Don't use plagiarized sources. Get your custom essay on
“ Rain Movie Review ”
Get custom paper
NEW! smart matching with writer

From the viewer’s first introduction to Janey, a high angle shot of her floating in a starfish position, gives us a deceitful impression about this seemingly, normal carefree life of a young teenage girl.

The typical sunny scenery, clear blue water and weatherboard batches sets Christine Jeffs viewers to believe that Janey is surrounded by family life and fun, sharing barbeques and summer swims at their beloved family batch. Christine Jeffs has deliberately juxta-positioned this with a shot of Janey and her mum swimming, however her mum is holding a glass of alcohol. Janey’s mother lets go of the glass, and as it begins to sink to the sea floor, a low angle shot shows Janey diving after it. This immediately leaves the viewer confused about the role model Janey is following, would a normal family allow their thirteen year old daughter to frantically chase a glass of alcohol, or would they be more concerned for their daughter’s safety in deep water? This initial establishment of Janey and her mother’s relationship reveal to the viewers that Janey is growing up under the influence of an irresponsible parent who fails to teach suitable priorities to her young daughter.

Janey is being led to believe that alcohol is desirable and should be prioritized even if detrimental obstacles are to be faced. This acceptation of alcohol becoming an idolized part of adolescence and womanhood reveal to Jeff’s audience that the inappropriate role model Janeys mum is offering her daughter is leading her towards an un-healthy road into womanhood and giving her the belief that the world is like one of her toy dolls, she can pick it up and be responsible when she feels like, or she can throw it away and hide it. Janey is curious about the next stage of her life, wanting to become a ‘woman’. All around her are clues to what this responsibility might entail, but she is left on her own to uncover if her adult role models portray adulthood appropriately.We are shown Janeys view from beside a tree of her mother kissing Cadey, a new family friend. We are then shown Janey witnessing her Mum kissing Cadey again through the bathroom door. Jeffs has deliberately positioned the audience to see through Janeys view of the bathroom door. This angle reveals to the audience that Janeys view of adulthood is limited, she is only exposed to the irresponsible actions of her mother, and is therefore copying an un-realistic role model.

As viewers we are confused and disgusted that a married woman is being intimate with a family friend who is staying under the same family roof as her husband and two children, especially Janey who witnesses her mother’s actions and believes that being a woman means that drinking and kissing unfamiliar men at parties is normal. “It’s okay, it’s fun to kiss boys”, this quote , from Janey’s mother is an example of the inappropriate advice Janey is being given. Jeff’s viewers are positioned to see a mother, who leaves her children to their own devices, surrounded by strangers while she devotes her life to drinking and flirting with men at parties and family functions. Janey is influenced by this woman figure in her life, and meaninglessly kisses a boy of her age, before shoving him onto the floor, this is Janey’s perception of intimacy, as she has learnt from her mother and she believes her actions are meaningless and that she is in control of the consequences.

The actions of Janey bewilder Jeff’s audience, as we realize that Janey is mimicking her mothers actions, however Janey does not have any true sexual desire and she is unaware of the situations she is leading herself into. Jeff’s audience begin to understand that because Janey had been left un-guided by her parents into her teenage life, she has no true understanding of how her actions will leave her vulnerable and she has no escape. Throughout the film, we are shown Janey’s feeling toward Cadey, a man who has participated in an affair with Janey’s mother, and takes advantage of Janey’s immaturity and inexperience with decision making. Cadey blatantly grooms Janey in front of her mother, making conversation with her which Janey believes she is in control of and feels special. “Would you like a drink?” Cadey offers Janey alcohol and cigarettes during a family outing on his boat, even though he knows she is only thirteen. Janey’s mum is dissatisfied within her marriage and unaware that her self-absorption has left her oblivious to Janey’s encounters with Cadey and the obvious signs of his intentions.

Later, when Janey ventures into the forest alone with Cadey we are shown a worms eye view shot, the tree height is enhanced, and as viewers we are positioned into Janey’s vulnerable situation. Janey is unaware of just how small she is and the situation she is setting herself up for with this grown man. The next shot of Janey lying in the crucifix position, naked on the forest floor is a worryingly disturbing scene for Jeff’s viewers, and outlines the vulnerability of Janey. Janey’s copycat behaviour of her mother and neglect of parental guidance throughout her stages of curiosity into womanhood from her parents has led her to tragedy. Raised by a poor decision making mother, whose own marital dissatisfaction led her to neglect her children, Janey also has to live with her poor decisions and actions with Cadey, which left her younger brother, Jim to his own devices alone at the beach resulted in him drowning. These consequences have ricocheted from Janey’s parents neglect of their roles and guiders and providers of safety to their children and Janey must now live with the catastrophic loss of her brother and horrifying entrance into womanhood due to her mis-guidance and belief that she, like her mother was in control.

Janey’s limited guidance, experience and understanding of the world, left her vulnerable and exposed to predators such as Cadey, who took advantage of her parents neglect and her curiosity. Christine Jeff’s viewers are shown a tragic story of the consequences of poor parenting and decision making, and how our actions influence our younger generation. Through main character Janey, Jeff’s viewers are positioned to recognize the danger Janey and her brother are exposed to and how easy it is for our actions to be witnessed and used as a role model for others and we are left to ponder if our actions could damage the future of others who idolize their elders. Jeff’s audience are shown how through the neglect of guidance and parenting, childrens transitions into adulthood can leave them vulnerable and damaged for the rest of their lives. 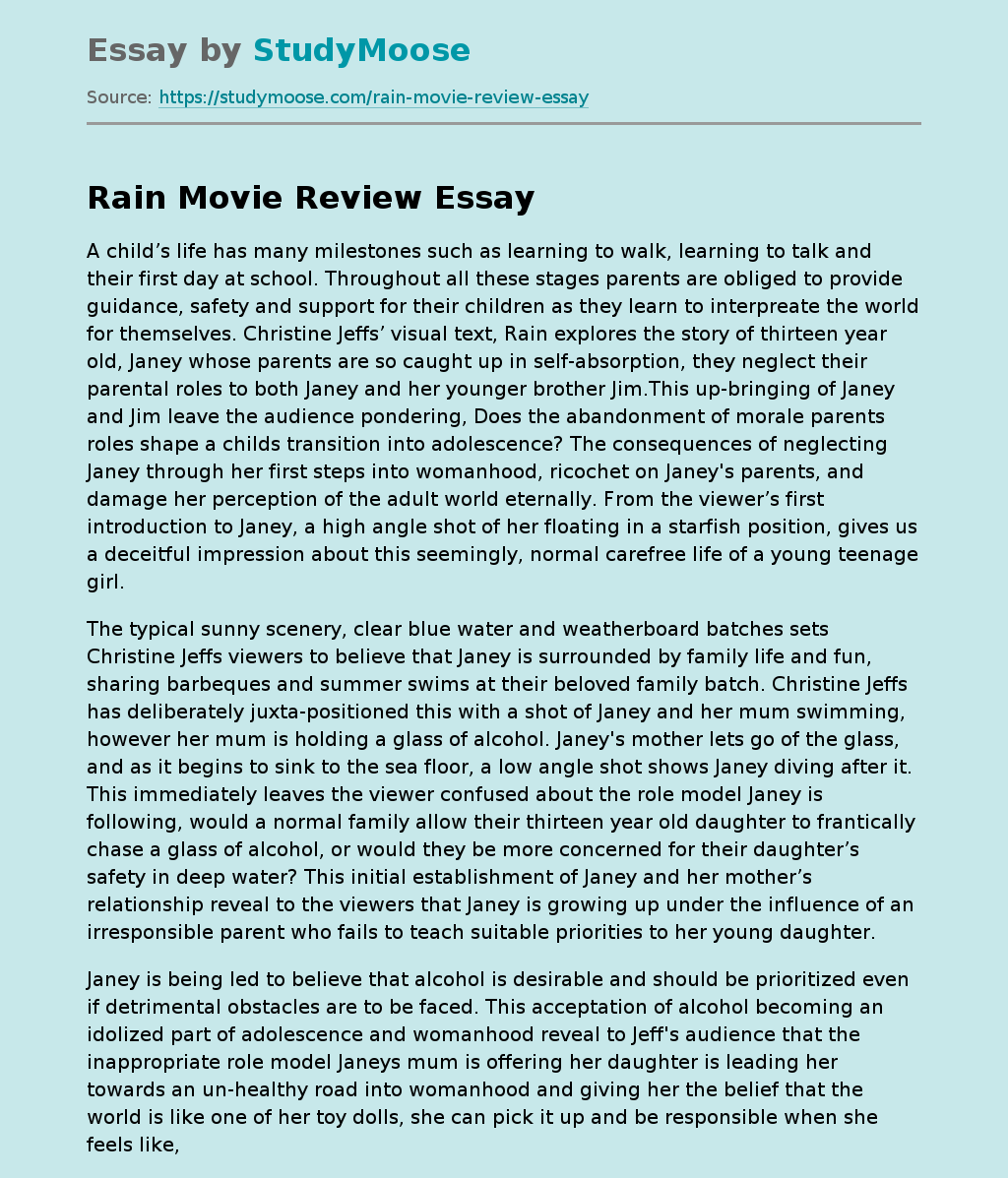