In point of fact, one hotel could be a costly “packaged” with highly expensive automatic control and considerable security strategy and service; however, other property could have a security guard, who is taking a responsibility for the safety by checking the situation on the floors. Fire accidents at the hotels are one of the most common problems, which lead to the fatal and ruinous consequences that can negatively affect guests and also the prestige and reputation of hotel.

For the framework, there is a case in point of the chain hotel named the Radisson, which has a range of issues particularly with fire safety.

The primary aim and purpose of this report is to investigate the particular difficulty that the hotel faced with, make an essential analysis that based on this issue and suggest relevant solutions in order to address the problem. For the solution of this problem, there is a need of the managerial theoretical concept regarding the security issues and specific approach by using analysis.

In addition, the report includes an example (existing case study) of the hotel named MGM Grand, which faced with the similar problem as the Radisson Blu Nice, France. The theory regarding security was proposed by Barry Buzan, Ole Waever and Jaap de Wilde in 1998. Their approach, which includes five factors: military, political, economic, environment and societal, can be used for addressing the problem of fire accidents in hotels, particularly in the Radisson Hotel Blu, which is located in Nice, south of France.

There were some limitations of research such as a lack of details regarding the issue that happened in the Radisson Blu Nice hotel and shortage of information, which is concerning the theory of security.

To begin with, the hotel Radisson Blu is located in the famous “Promenade des Anglais” Riviera in Nice, France. This hotel is a part of the major international company named Radisson hotels and resorts, which has respected and prestigious status all over the world.

However, on the 9th of March, 2002, the fire occurred on the 4th floor of the hotel Radisson Blu, 237 people were evacuated from the heat source and 13 guests were poisoned by carbon monoxide gas (newsru. com, 2002). There was a suggestion of two main causes of fire incident such as a short circuit in the air conditioning in the room and the arson, which was organized in order to avoid a competition among hotels. Apart from the occasion, the hotel has its own strengths and weaknesses as well as opportunities and threats. 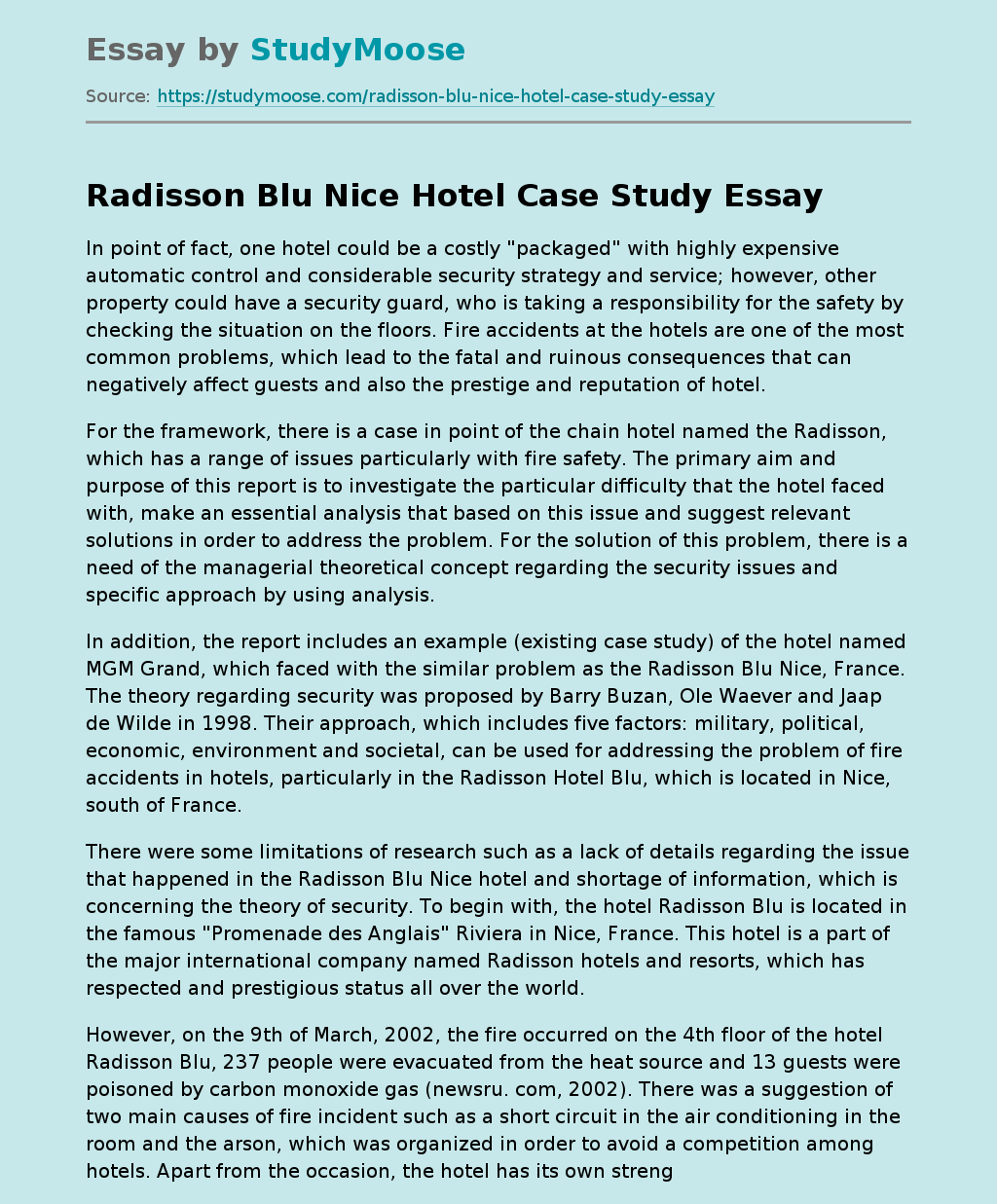