‘I don’t really understand what it means either’ muses the shaggy-haired, ghost-like lyricist and self-proclaimed ‘eccentric’, Joey Smith of Liverpool skank-indie foursome ( or 6-piece if you count estranged members Safety Abbie, on tambourine and Irish snaggle-tooth Shane McGowan on banjo) Tyro, when asked about the bands name. ‘The drummer came up with it’. The drummer being 15 year old Jud, named after Julian Lennon who for reasons known only by himself couldn’t be present at todays interview. ‘yeah, he tends not to show up to these type of things’ , quips tousled haired bassist Bryan Beckett.

Don't use plagiarized sources. Get your custom essay on
“ Radar music journalism ”
Get custom paper
NEW! smart matching with writer

It seems Jud isn’t the only member of the band reluctant to give anything to the interview, blonde and broody front-man Jay doesn’t utter a word throughout the whole time I’m there.

Tyro haven’t been together for even a year yet, and already they have A&R monkeys all over the country flocking to their modest Liverpool gigs and hide-outs.

Scoring their first gig only 3 months ago at a friends birthday party, the Liverpool lads have come a long way since meeting earlier this year. ‘I’ve been waiting for this’, declares Joey about the thunderbolt of attention that’s came upon these scousers. ‘I mean, I always knew I was going to become famous in the music industry with or without a band’. But all the credit shouldn’t go to him for the unique spike-punk sound these kids have been making. Jay’s unique style of speed-rap, similar to that of Jamie T and Mike Skinner, contributes to their distinctive sound almost as much as Smiths sharp-riffs and biting social comment.

For a band so young (the youngest member being 15 and the oldest only 17) , Tyro ooze confidence and ambition. Their debut EP ‘The Sophie Sessions’ boasts crowd pleasers such as ‘Claret’, ‘Crossroads’ and an unlikely cover of N.E.R.Ds ‘Lap dance’, and they are looking to be the head runners in the scouse-rock revolution, dubbed ‘New-Mersey’ , along with fellow Liverpool scenesters The Wombats and Hot Club De Paris.

– Liverpool’s famous for its music scene do you take much from that for your music?

Joey: ‘Nah, not really into the Beatles or anything, its kind of a clichï¿½ really isn’t it?’

‘Yeah, I was saying that to Joshua just last month’ grins Bryan (referring to Joshua Von Grimm of Horrors fame) clearly smitten with the fact that he is now firm friends with Southends Goth-garage 5 piece.

‘Well, I wouldn’t exactly say friends. We met them outside their Liverpool gig and they asked us to take them shopping’ coos Beckett.

The Horrors it seems, are a key influence for Tyro, in a list of influences so varied it comes as no surprise to us that the band have such a unique sound. From The Libertines to Thin Lizzy, every genre of rock music can be cited in helping these lads create something special.

What: 4 (ahem…six) scouse kids with a penchant for old records and grit-pop beats.

Live: Their UK tour kicks off in January

Burn: The cover of ‘Lap dance’ at www.myspace.com/tyrotheband

What Became Of The Liverpool Lads?

The other hot contenders in the ‘New-Mersey’ revolution..

This three piece have already seduced their hometown with their fast-paced punk-pop and thoroughly British lyrics. Widely known on the Liverpool circuit, these darlings of the music press are also becoming more well-known on a universal basis, and have just played gigs in Oslo, Bergen, Trondheim and erm… Cardiff.

An old-fashioned but ‘not retro’ five-piece, who have just let the ink dry on a new deal with Indie label ‘B-unique’. These young Bowie obsesso’s are just about to embark on a tour with indie heroes Dirty Pretty Things and if you aren’t already a huge fan (where have you been?) then make sure you check out new single ‘On A Holiday’ and they’ll be your new favourite band in no time.

Possibly the likeliest of all the ‘New-Mersey’ bands to threaten Tyros position as ‘Band-most-likely’. These old-timers have been at it for years, getting their name seen all over their hometown using graffiti. This lot ‘eat, sleep and smoke rock and roll’ and we can tell. Their live shows are as tight as a pair of Russell’s skinnies and their energy on stage is electric. The 5-piece sound like ‘A bomb going off in your head, a lyrical education to boot’ – their words, not ours. Also read an at the Crossroads meaning 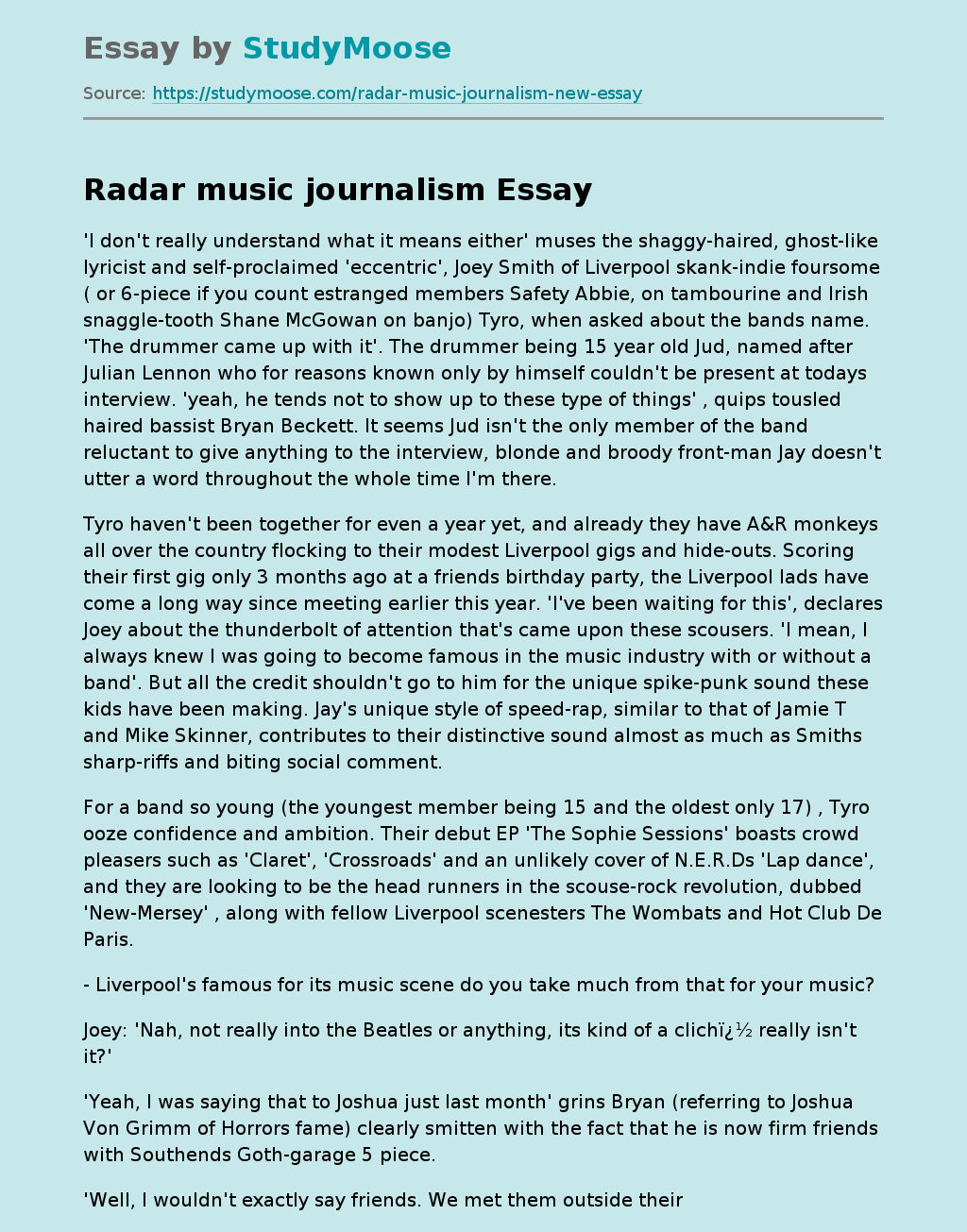