Racism – Will it ever end?

Racism has been an issue that has been around for hundreds of years. Since back from when people of color used to be slaves until now, it has been quite interesting watching all of it unfold and witnessing how the world has become a more united front. But with that said, has racist really ended? I mean with groups like the KKK amongst other hate groups that discriminate against people of different ethnicities, will hate and racism amongst other racists really ever be abolished? For my paper I will be focusing on Racism and the changes that have taken place throughout time.

Don't use plagiarized sources. Get your custom essay on
“ Racism – Will it ever end? ”
Get custom paper
NEW! smart matching with writer

Although, these changes have played a huge role in regards to getting rid of slavery and helping to eliminate some hate, will racism ever completely end? I find that my topic is relevant to the course, in regards to the fact that it does follow the theme of racism and looks at it from more of a skeptical view.

The central question that I will be answering throughout this paper is that racism still does in fact exist today and will probably never end within any of our lifetimes. I believe that by answering and bringing light to this question that it would help make sense of our course themes because the contents of this question is basically everything that we have learned throughout this course (race, racism, ethnicity, whiteness) and putting it into a working question that I can look at more closely and show results that racism will in fact never end for the rest of our lives.

After growing up in a small, rural, predominantly Caucasian town where I have fell the victim to/witnessed racism and although the media may portray racism as diminishing and claiming that it’s existence is little to none, I know that it still does exist and in fact plays a big role in many peoples lives whether they notice it or not.

There have been some secondary academic sources that do in fact agree with my thesis. One of the sources I found is a book called, “Racism out of Place: Thoughts on Whiteness and an Antiracist Geography in the New Millennium”. This book discusses racism within the new day and age. It gives us the example of two young white males who go on a killing spree of African-American and Hispanic individuals but were made to look like victims in the media. The economics of Racism is another source that I find supports my theory by discussing in the 1970’s after the civil rights movement that the government was moving black people to the North because there was suppose to be no racism but that turned out to be completely false.

The reading also looks upon how the media was portraying racism as gone when it really was not. The last source that I have found that supports my theory is a study based on anger in regards to African-American’s dealing with racism. The title of the study is called, “Getting Mad But Ending Up Sad: The Mental Health Consequences for African Americans Using Anger to Cope With Racism” This looks at how black people cope with dealing with racism and how it has negatively effected their well-being.

“Racism out of Place: Thoughts on Whiteness and an Antiracist Geography in the New Millennium.” – Kobayashi. Web. 4 Nov. 2014. . 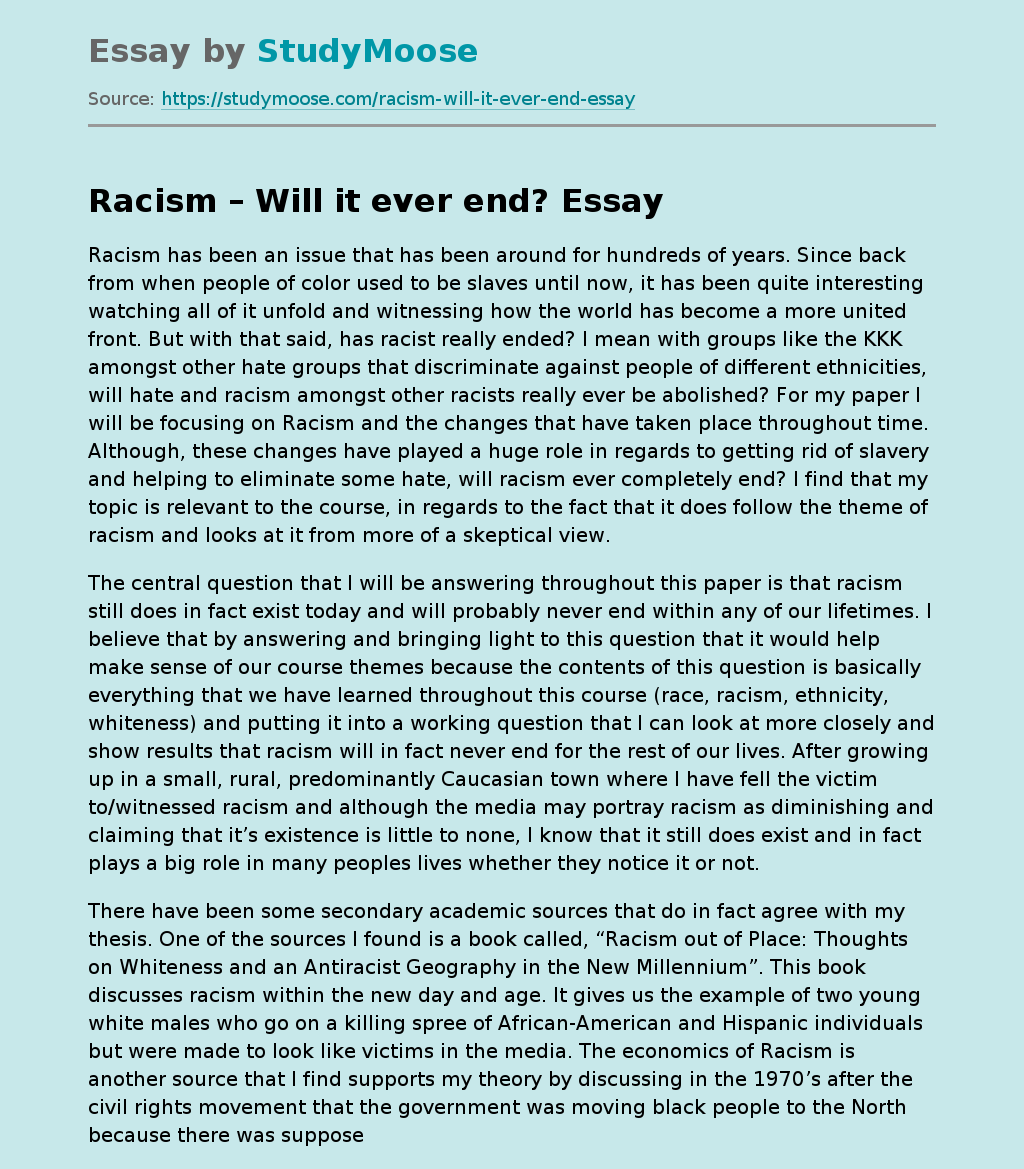