Racism in "To kill a mockingbird" Essay

“If there’s just one kind of folks, why can’t they get along with each other? If they’re all alike, why do they go out of their way to despise each other?” (Lee, 259)

Harper Lee uses her novel ‘To Kill a Mockingbird’ to accentuate the catastrophic nature of racism. Some troubling individuals or groups of people have felt powerful by exercising their dominance over another group claiming they are worthier, stronger, and smarter. The problem of racism has often been associated with the history of the United States of America.

Don't use plagiarized sources.
Get Your Custom Essay on Racism in “To kill a mockingbird” Just from $13,9/Page

Slavery has been abandoned long ago, but for years black people were considered to be of lower class, their capabilities were denied, and their dignity was completely diminished.

It took American people hundreds of years to achieve the level of true democracy, when they can grasp the notion of equality between people, including acceptance of differences in gender, nationality, religion, culture, and what most matters in the book we read – race.

Discrimination can be shown through the Maycomb community, the Tom Robinson trial, and Boo Radley. As Scout’s cousin told her, “He’s nothing but a n*****-lover!” (Lee, 94).

Segregation could be noticed not only in the Maycomb County, but in the whole Alabama state, and the rest of Southern USA. Black people could not ‘mingle’ with the whites and their children attended separate schools. Adults socialized at places where they wouldn’t be noticed or bother the whites (ex. the black church in Maycomb). They each had their own territories, and assumed it was immoral for them to fuse together. They would go out of their way, saying things such as “You ain’t got no business bringin’ with chillum here – they got their church, we got our’n” (Lee, 136).

The whites and blacks knew very little of each other, and that fear of not knowing became worse by imagining how bad the other side must be. This was also one of the problems that prevented racism to disappear. ‘The Great Depression’ during the 1930s made people (whites) stay focused on their own poverty, made them angry, and stopped them from seeing poverty and hardships on the other side. All these factors made polarization stronger, and created grounds for racism to grow.

The problem of racism and segregation was presented through subtle descriptions of the suburban life of very young and innocent children. Their view of events and relationships in the book was a strong contrast to the negative characters of white racists who wanted to take justice in their hands and execute Tom Robinson. In a child’s perspective, displayed through narration by the author (Scout), portrayed an innocent assumption that all people are the same, and poverty and racism are deeply unfair and brutal things. Seeing events through the eyes of a child (ex. Scout) helps us understand that feeling of hatred and discrimination is not something we are born with, but is often taught by adults.

In Maycomb, most people are influenced and taught by their parents and peers that there are certain people in society that do not fit in with other people. Jem and Scout deeply argued the cruel idea. “I think there’s just one kind of folks. Folks.” (Lee, 258). Black people are an obvious example, but it’s also people based on their wealth and lifestyle. Scout is restricted from playing with her fellow school-mate Walter Cunningham, her Aunt Alexandra replies; “Because – he – is – trash, that’s why you can’t play with him” (Lee 257). Her aunt is one of those people in Maycomb who is always injustice.

Chapters that describe situation before and after the court trial against Tom Robinson are full of examples of how racism was demonstrated ‘routinely’. Atticus Finch faced huge pressure only because he agreed to defend a black man, which proved that someone could lose their reputation for getting too close with the blacks. Scout got into fights trying to defend her father’s pride, when the kids at her school called him a ‘n***** lover’. “He had announced in the school-yard the day before that Scout Finch’s daddy defended n*****s.”(Lee, 85). She strongly disagreed with the kids’ terrible judgement on black people, and loathed the sight of it. She would get out of her way to stop the unhuman behaviour, and to defend her innocent and brave father.

Love relationships between whites and blacks was strictly forbidden, which was clearly shown in Mayella’s example, who had such a powerful guilt for
becoming fond of Tom, that she did not hesitate to lie and attempt to destroy Tom’s dignity and whole life. Tom Robinson recalled while testifying; “She reached up an’ kissed me ‘side of th’ face. she says she never kissed a grown man before an’ she might as well kiss a n*****” (Lee, 219). Atticus’s speech during the trial was so powerful and would normally touch everyone’s heart and make people start thinking otherwise, but did little to change the outcome.

The example of Tom Robinson’s case in the book proves how blacks had no chance to win any case. The whites had all rights to bring accusations against the blacks, and bring them to the court. Mayella’s defender even assumed that he had the right to disrespect Tom by calling him “boy” (Lee, 223). The trial itself would not do them any favour as the decisions were often made despite clear evidence. Who could expect a different outcome, especially when the jury was made of whites, who were often open racists.

One more detail from the book that also spoke about discrimination is when, towards the end, in a mysterious way Jem was attacked, lost consciousness and was brought home by Boo Radley. The Sheriff felt obliged to come up with a cover-up story, so poor Boo would not become the centre of attention. He made up a story that Bob Ewell fell on his own knife and died, and there was no connection to poor Boo Radley. “I may not be much, Mr. Finch, but I’m still sheriff of Maycomb County and Bob Ewell fell on his knife.” (Lee, 317).

The fact that problem was resolved this way also tells us about double standards used for the blacks and whites. If there had been a black man suspected of murder, there would have been no way for him to escape the trial. However, the dignity of a white man had to be protected at any cost. In a way, it is a fair deal, especially after what we have learned about strong prejudice towards mentally and physically challenged people like Boo Radley, which caused him enough misery and suffering.

Two main characters in the book carried a hope for the generation that is to come, that things will change. “Why reasonable people go stark raving mad when anything involving a Negro comes up, is something I don’t pretend to understand” (Lee, 100). Both of them (Scout and Jem) were inspired by their father Atticus, who believed that racism is a disease from which his kids should be saved. Education is one of the key factors that enlightens people, gives exposure to different views, and teaches the wide American population that they have so much in common. Wasting time segregating people of all kinds prevents countries and nations from making huge advancements. “Why don’t they like the Jews, you reckon, Miss Gates?” (Lee, 281). That is one of the messages Harper Lee wanted to pass on in an indirect way. Fortunately, societies changed for better; more and more people got educated, they learned about tolerance and equality.

Atticus’ thoughts truly stand out in this novel. “You never really know a man until you stand in his shoes and walk around in them” (Lee, 321). The people of Maycomb had horrendous and evil assumptions about black people, and how they do not belong with society. Although they specially thought about them through an outside perspective, they rarely thought about them through an inside perspective. They never knew that they were just innocent people trying to have a good life in America. Through apprehensible context, the novel truly brings out the ugly nature of people, and their gruesome delight of disrespecting and discriminating people of disparity – especially black people.

“I knowed who it was, all right, lived down yonder in that n*****-nest, passed the house every day. Jedge, I’ve asked this county for fifteen years to clean out that nest down yonder, they’re dangerous to live around ‘side devaluin’ my property-” (Lee, 199). Ignorance can cost people their lives, ruin their families, and bring separations to those who should be united. Harper Lee’s book described all these problems in such a powerful and touching way that many generations of readers will remember its messages.

Racism in "To kill a mockingbird". (2016, Aug 12). Retrieved from https://studymoose.com/racism-in-to-kill-a-mockingbird-essay 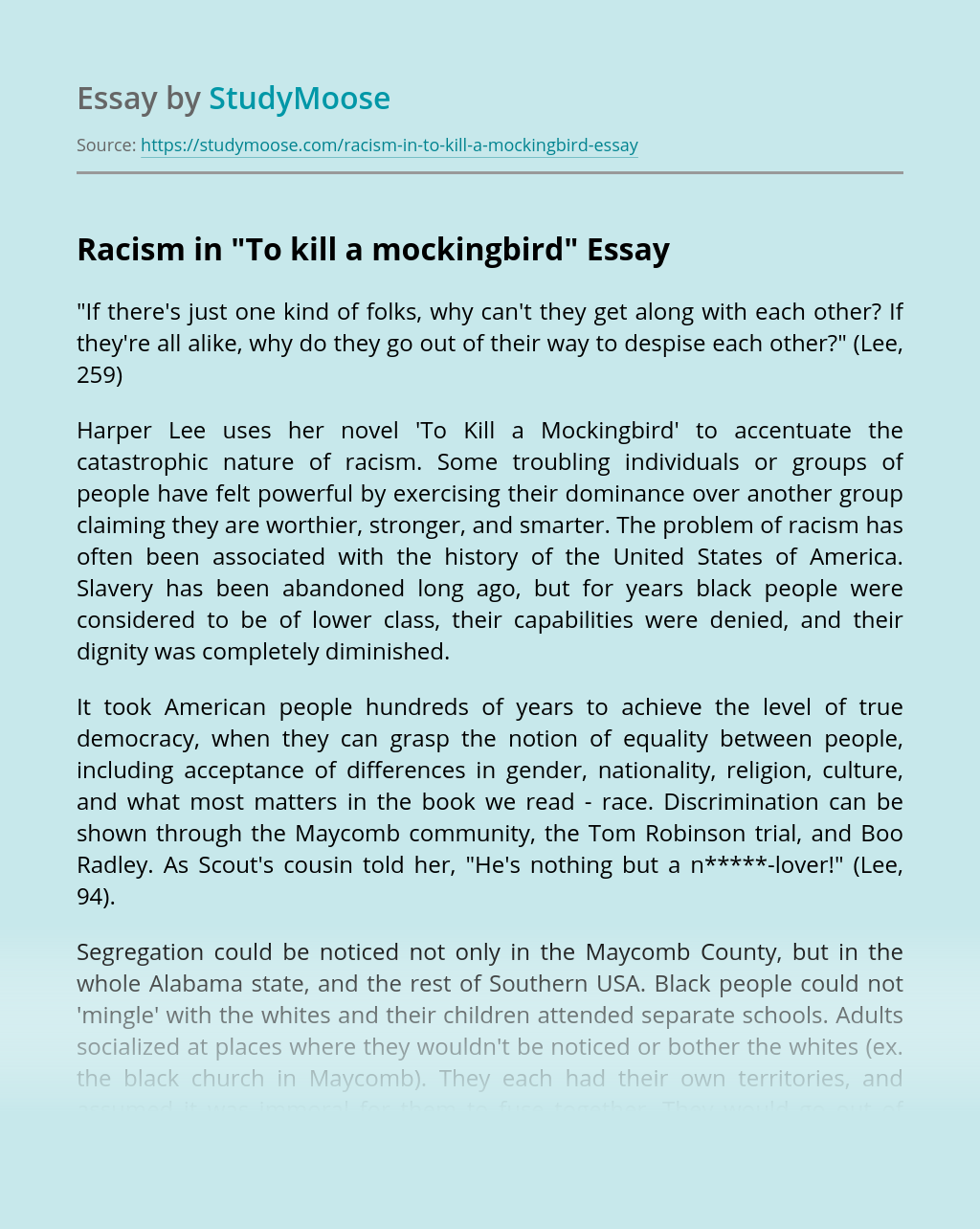 What is good and what is bad seems pretty easy to define. Good is being morally right, an action or a quality that does not cause harm to people, harm to self, nor cause sadness. Goodness benefits others, if not the self, and it causes happiness. Evil is the opposite of good, or the absence... VIEW ESSAY

Throughout Arthur Miller’s Death of a Salesman, Willy Loman tended to take advantage of practically everybody he can be found in contact with. He injured others constantly throughout this play for a range of various factors. Among his crucial targets was his other half Linda. From spoken to finical, Willy Loman abused his spouse Linda.... VIEW ESSAY

View sample
Racism in the Adventure of Huckleberry Finn

Introduction Huckleberry Finn is a wonderful book that captures the heart of the reader in its brilliance and innocence. Despite many critics have attacked its racist perspective;the piece merely represents a reality that occurred during antebellum America,the setting of the novel. Twain’s literary devices in capturing the focal of excitement,adventure,and human sympathy is a wonderful... VIEW ESSAY

Araby is a story about a young boy who has an intense attraction to this girl. He goes out of his way to watch her every morning, and eventually talks to her. She says how she wants to go to the bazaar but cannot due to the fact that she’s going away on some church... VIEW ESSAY