Racism in "To Kill a Mockingbird"

“Although slavery may have been abolished, the crippling poison of racism still percists, and the struggle still continues” (Belafonte). Harper Lee’s novel To Kill a Mockingbird is a prime example of racism in the real world. People of color in the nineteen hundreds and in some places today are treated unfairly and are not provided with the respect or opportunities they deserve. Racism needs to end, everyone should be given equal rights no matter what they look like or what color their skin is.

Don't use plagiarized sources. Get your custom essay on
“ Racism in “To Kill a Mockingbird” ”
Get custom paper
NEW! smart matching with writer

In the early nineteen-thirties racism was an extremely prominent problem.

During the nineteen hundreds people of color were continuously falsely accused of crimes they did not commit. In the novel To Kill a Mockingbird written by Harper Lee, a man named Tom Ribinson was falsely accused of raping a white woman and ended up paying the ultiment price for it. “There’s something in our world that makes men lose their heads-they couldn’t be fair if they tried.

In our courts, when it’s a white man’s word against a black man’s, the white man always wins. They’re ugly, but those are the facts of life” (Lee 220). Atticus Finch is Tom Robinson’s lawyer, he did all that he could to prove Tom did not do anything and he was still found guilty. Atticus made a point during the trial where he said “She was white, and she tempted a Negro. She did something that in our society is unspeakable: she kissed a black man.

Not an old Uncle, but a strong young Negro man. No code mattered to her before she broke it, but it came crashing down on her afterwards.” (Lee 203-204). If a person of color was accused of anything in the nineteen-thirties then there was almost no possibility of them winning the trial or of anyone ever believing they did not commit the crimes.

There was an extremely bad problem with racism in everyday life too. In the nineteen hundred slavery was still a really big thing, especially in Alabama where the people in To Kill a Mockingbird lived. “You aren’t really a nigger-lover, then, are you? – I certainly am. I do my best to love everybody – I’m hard put, sometimes – Baby, it’s never an insult to be called what somebody thinks is a bad name. It just shows you how poor that person is, it doesn’t hurt you.” (Lee 108). The term “nigger-lover” was an insult many people would use when they thought someone was putting a colored person’s needs over their own or white persons needs. Most white people back then truly believed that they were better than people of color in every way and that they were always top priority over a person of color. Atticus Finch was one of the very few people that believed people of color were equals to people that were white and that skin color did not affect anything except their appearance.

Racism in "To Kill a Mockingbird". (2019, Dec 10). Retrieved from https://studymoose.com/racism-in-to-kill-a-mockingbird-2-essay?post 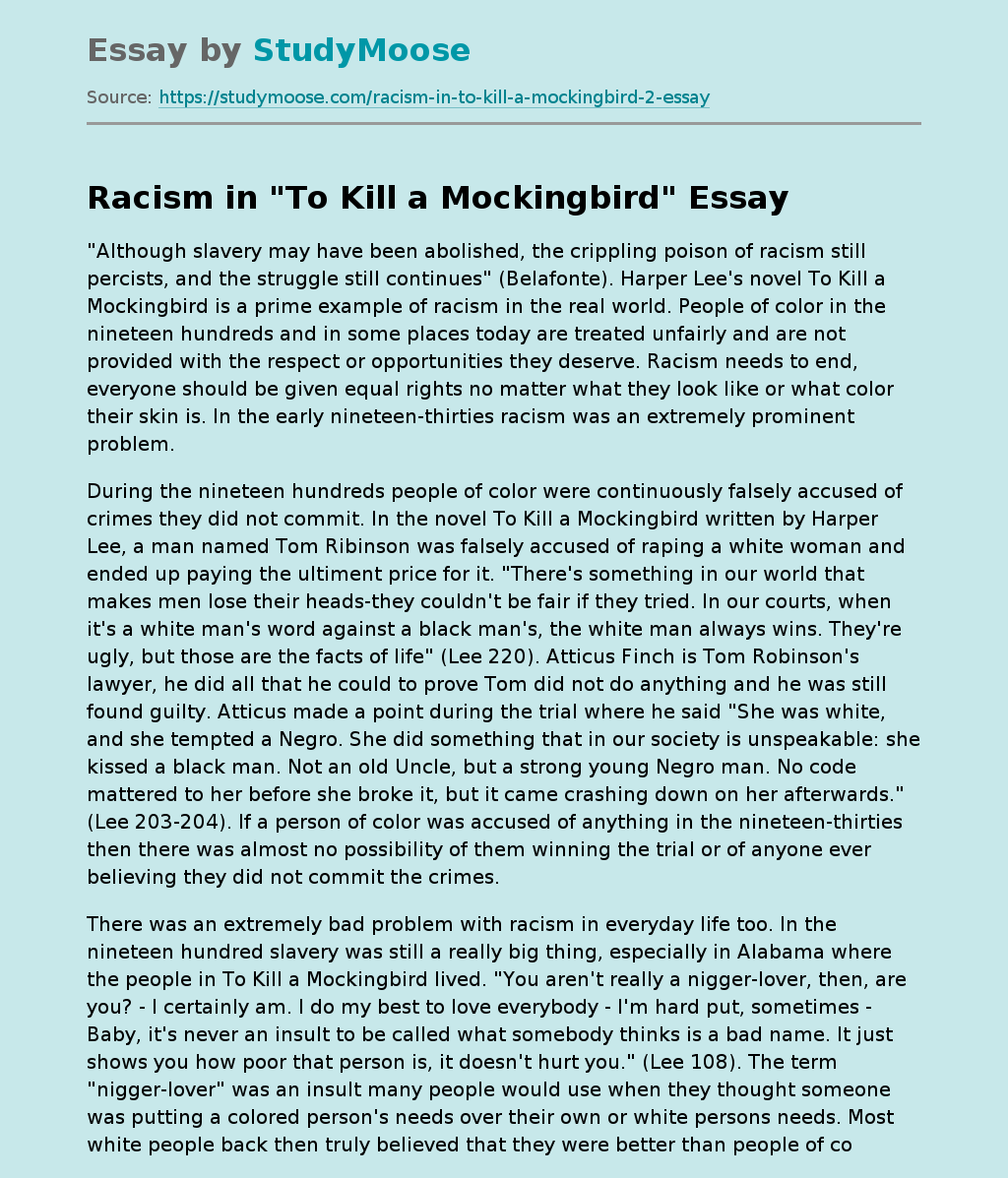