Racism in "Heart of Darkness" and "Apocalypse Now"

The book “Heart of Darkness” and the movie “Apocalypse Now” are two works dealing with deep issues of evil. (Beyond imperialism, because the evil of imperialism has a root. For example, crack the nut) They refer places boiling down to a discussion of racism. The Thames River as in any mythology is a source of life. At the end, Marlow comes upon Kurtz’s Intended and said, “An object of the fecund”. Also, these two works deal with how a man is surrounded by evil acts and evil minds to fight of the fire fueled by the society.

Don't use plagiarized sources. Get your custom essay on
“ Racism in “Heart of Darkness” and “Apocalypse Now” ”
Get custom paper
NEW! smart matching with writer

They also talks about how a character is a racist, when that character clearly condemns his way of life by leaving the Congo, and confirms the ills of society by lying about them.

Firstly, I think that the racism claims are overstated, in two ways. A) Conrad’s racism, such as it is, is directed not at black people as a whole but rather as Africans.

I think the prejudice must be recognized as activism, or whatever the proper term is, rather than as racism. B) Conrad is critical, not solely of Africans and their way of life, but also of European culture. He’s just as anti-white as he is also anti-black. Additionally, I think that Conrad may be considered a racist if and only if you decide that the definition of racism is thinking your race is better, but I really don’t think that he could be considered a white supremacist or that he really contained a deep hatred for Africans.

In fact, I don’t think that he was even that serious on his own race. It is because that overtime he describes the presence of the white imperialist or any white people in general, he describes them in a bitter, dark way. And while he describes the Africans in a sort of blunt way as natural, rustic, raw people. I also think he does it in a much lighter way. I don’t think he criticizes the way they were. I just think he is ignorant of the political correctness found in today’s society.

Moreover, I don’t consider the answer is simple enough to just say one is good and the other is bad. We have to keep in mind when this book was written. In that time period the other didn’t really have much perception at all on what the African people were like. He only could go by the common knowledge of the day that wasn’t very pleasant. I don’t think that we can expect an author in that time to be a non-racist.

Ever since I read that article, I have thought of the book as being pretty disturbing. I don’t know if I would have considered this book quite so frustrating. If I had not read that article, since the racism is the only part of the book that I have been able to focus on. I still think it is very well written and interesting, but it is more difficult to enjoy it, knowing that the author was so racist. Then again, I suppose one cannot expect much more coming from a story written at a time when whites didn’t know hardly anything about other races, and cultures.

Ultimately, I believe that there is a definitely a strong element of racism in both Heart Of Darkness and Apocalypse Now. However, I believe that the article on ‘Achebe’ overreacts. Granted Conrad displays no respect for the African Culture, this is historical fact and granted that it is not good. It is a part of history in which it cannot be ignored, so it will never happen again stating that black people should be grateful of the white because they were the ones who got them out of slavery in the first place.

Racism in "Heart of Darkness" and "Apocalypse Now". (2016, Jun 25). Retrieved from https://studymoose.com/racism-in-heart-of-darkness-and-apocalypse-now-essay 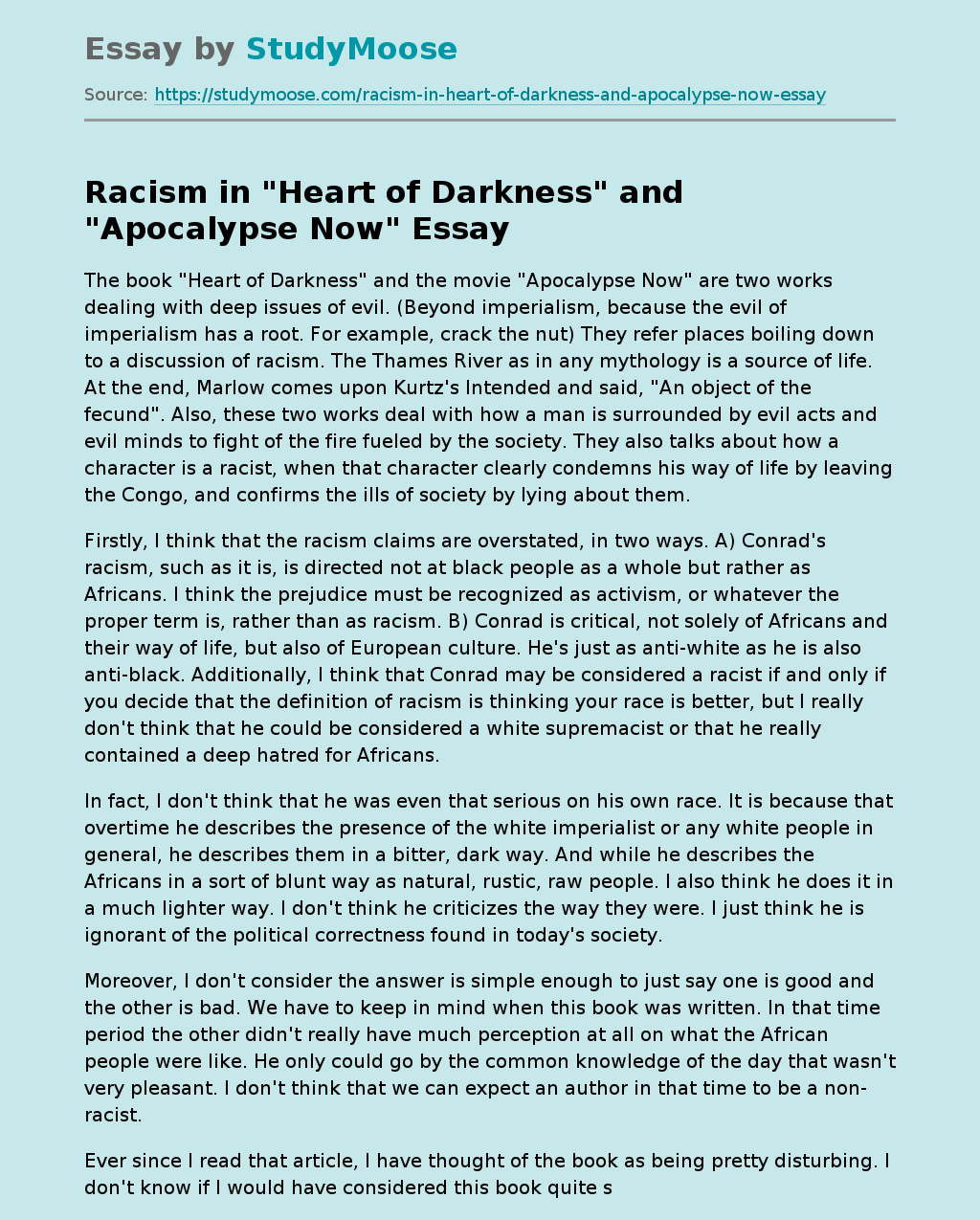