Racism in a Story Separate Pasts

Separate Pasts takes place during the 1950’s in Melton A. McLaurin’s small hometown, Wade, North Carolina. It is a detailed story of his boyhood in the rural South, which was a time when racism was a daily norm. McLaurin argues that racism existed unchallenged in the rural South. I found that this argument is valid due to the personal experiences that he had to face while growing up in the rural South, which he describes in great detail. McLaurin grew up with the knowledge that whites were treated very differently than blacks and not thinking anything of it.

Although blacks and whites were demanded to work together in the village, he noticed that everyone played a different role based off their race. Some of the roles being, blacks always entered through the back doors of homes, hold the door open for the whites, did the laundry for the whites and were responsible for all the labor work for the whites.

McLaurin was not aware of how severe racism was at that time until he experienced it first hand with Bobo. Bobo, who was his first black friend, was not an important part of his life although they grew up together and had known him his whole life. It all started one fall Saturday afternoon when McLaurin, BoBo and six other people, white and black, started playing a pickup game. Pickup games were basketball games played between two integrated teams, regardless of race, based solely upon the skills of the individuals.

As the game commenced, the basketball that was being used was known to leak air and had to be re-inflated every thirty minutes. McLaurin, Bobo, and their friend Howard went to the store, the store he worked at, to inflate the ball once they noticed it was no longer able to bounce and interfered with the game. There was a normal procedure that needed to be followed in order to inflate the ball. First, there was a needle that needed to be lubricated by being stuck it into someone’s mouth or having someone spit on it.

Next, the needle would be inserted into the small round valve where the basketball was inflated. By following those two steps it would lead to the third and last step, inflating the basketball. However, this particular time in McLaurin, Bobo and Howard’s case, they ran into a dilemma. The needle could not be inserted into the valve, no matter how many times they tried. The needle was handed over to Bobo for him to apply saliva using his mouth to try and lubricate the needle for it to be pushed into the valve. Still with no luck, McLaurin decided to take the matter into his own hands and put the needle into his mouth, convinced that his spit would get the needle into the valve allowing them to return to the playing court.

After placing the needle into his mouth, a moment of realization hit him. “A split second after placing the needle in my mouth, I was jolted by one of the most shattering emotional experiences of my young life.” (Page 37) He came to the realization that the same needle he had just placed in his mouth, was in Bobo’s mouth seconds before. “The needle in my mouth, however, had been purposely drenched with Negro spit, and that substance threatened to defile my entire being…It threatened me with germs which, everyone said, were common along with blacks…these black germs would ravish my body with unspeakable diseases, diseases from the tropics, Congo illnesses that would rot my limbs, contort my body with pain.” (Page 37)

McLaurin felt that Bobo’s saliva, Negros saliva, threatened the concept of what being white meant. The more he thought about the situation, the more he became angry, upset and disgusted with himself. Its extremity caused McLaurin to feel the need to spit and gag in order to throw up any of the black saliva that might still have remained in his body. He felt as if Bobo’s black essence degraded him and made him like Bobo, black, less than human. McLaurin grew up in a village in which race and sex were so interwoven into the facts and fantasies of life, that residents instinctively understood their interrelated roles within the society. “….Sexual contact between blacks and whites had been an integral part of life in the South from the time the first slaves were introduced into the region.” White women had to be cautious of their dress in the presence of black males because whites people feared black men would be aroused if they were to see a white woman in a pair of shorts.

White women were also warned to “watch out for so and so”, or warned to not go places without being accompanied by elders. If a black male was to be attracted to a white woman, whites in spite of conveying the appropriate message automatically said derogatory and racist remarks. McLaurin caught interest in a girl named Charlotte Humphries who had been a schoolmate of his since the first grade. Blue eyes, blonde hair, having the complexion of a white girl, he was impressed and did not think pursuing wanting to date her would be a problem. However, regardless of his feelings, his mother disagreed and insisted that Charlotte would not be a good idea for him. McLaurin’s grandmother began to explain to him that he “just shouldn’t” pursue her, mentioning that the story behind it all goes back a long time ago. She explained that Charlotte’s great-grandmother was someone who was a “mulatto nigra”. Some mulattos pass as white, even though they are not, if they are light enough and that is what happened with Charlotte’s great-grandmother.

Even though Charlotte was blue eyed blond hair, McLaurin could not pursue her simply because black ancestry was in her blood. He was left “to ponder who Charlotte should date if she were white, but not white enough.” One summer night, McLaurin along with a gathering of boys under sixteen met in a small vacant lot behind a house where they played a modified version of softball which they played until the batters could no longer see the ball in the red twilight cast by the sun already hidden beneath the horizon. After the game ended, most players went home but McLaurin and some of the other boys decided to go to Noah Bullock’s Store, which was located across the village near the highway. At this store is where McLaurin remembered a “mean race-baiting incident” a murder he had witnessed a few months earlier. The shooting had occurred one late afternoon between dusk and the evening meal. A couple, Mary Lou Adams and her husband Martin, approached the store. Martin was a withdrawn man who was one of the few blacks whom the white residents feared.

Mary Lou shortly realized she was in immediate danger after entering the store and slamming the screen door shut behind her with her husband pursuing her carrying a shotgun. Martin shot and stuck Mary Lou in the chest causing her to collapse on the floor creating dark splotches everyone would be able to gaze at months later. Many of Wade’s citizens saw the crime as “simply another nigger shooting, exciting but of no real consequence”. The next day, McLaurin and the other boys approached the store and sat on a nearby bench and rehashed the murder, hoping that one of the store’s customers would entertain them with another shooting. When finding out that a customer named Sam was inside the store, their fears rekindled because they had heard stories about Sam killing someone with his bare hands. The boys decided to taunt with Sam by yelling a chant inside the store saying “Nigger, nigger black as tar, stuck his head in a molasses jar, jar broke, cut his throat, wet to hell on a Billy goat”, hoping that they could enrage Sam into causing a scene.

Once they chanted, they ran for their lives thinking Sam would run after them and hurt them. Sam never chased them, in fact he never even left the stores, leaving the boys with realization that Sam was just a collective figure of their imagination because he was black. McLaurin felt guilt for “violating the basic human dignity that my family acknowledged blacks possessed”. But more so because he had hurt Sam with the fact of his race knowing that Sam did not do anything to deserve the racist actions. (Page 109) In 1997, McLaurin lived in Wilmington, North Carolina when he decided to take a trip back to Wade, which eventually turned into an annual event. During his trip he learns that racism is still there even after all these years, just below the surface, in just about everything. “It’s in you, and it’s in me, and that’s the truth, down there inside us. That’s just the way it is.” (Page 176) Overall, I was highly convinced by McLaurin’s personal story where racism is shown to have been and still is a huge problem in the South. Racism began in the early years; people became accustomed to it and has unfortunately continued for many more years.

Racism was a very significant theme to the narrative that he was discussing because not only did he experience it first hand, he witnessed his family and friends go through the same thing his entire childhood and adulthood. McLaurin’s argument of racism was presented very effectively with several clear examples throughout the book such as Bobo, Charlotte, and Sam. The historical value of this book is getting a first hand, inside look of how life was in the rural South from a conflicted young white’s point of view showing the segregation and racism of the time and how his implanted views on racism were changed by his positive personal experiences with blacks.

Racism in a Story Separate Pasts. (2016, Apr 16). Retrieved from http://studymoose.com/racism-in-a-story-separate-pasts-essay 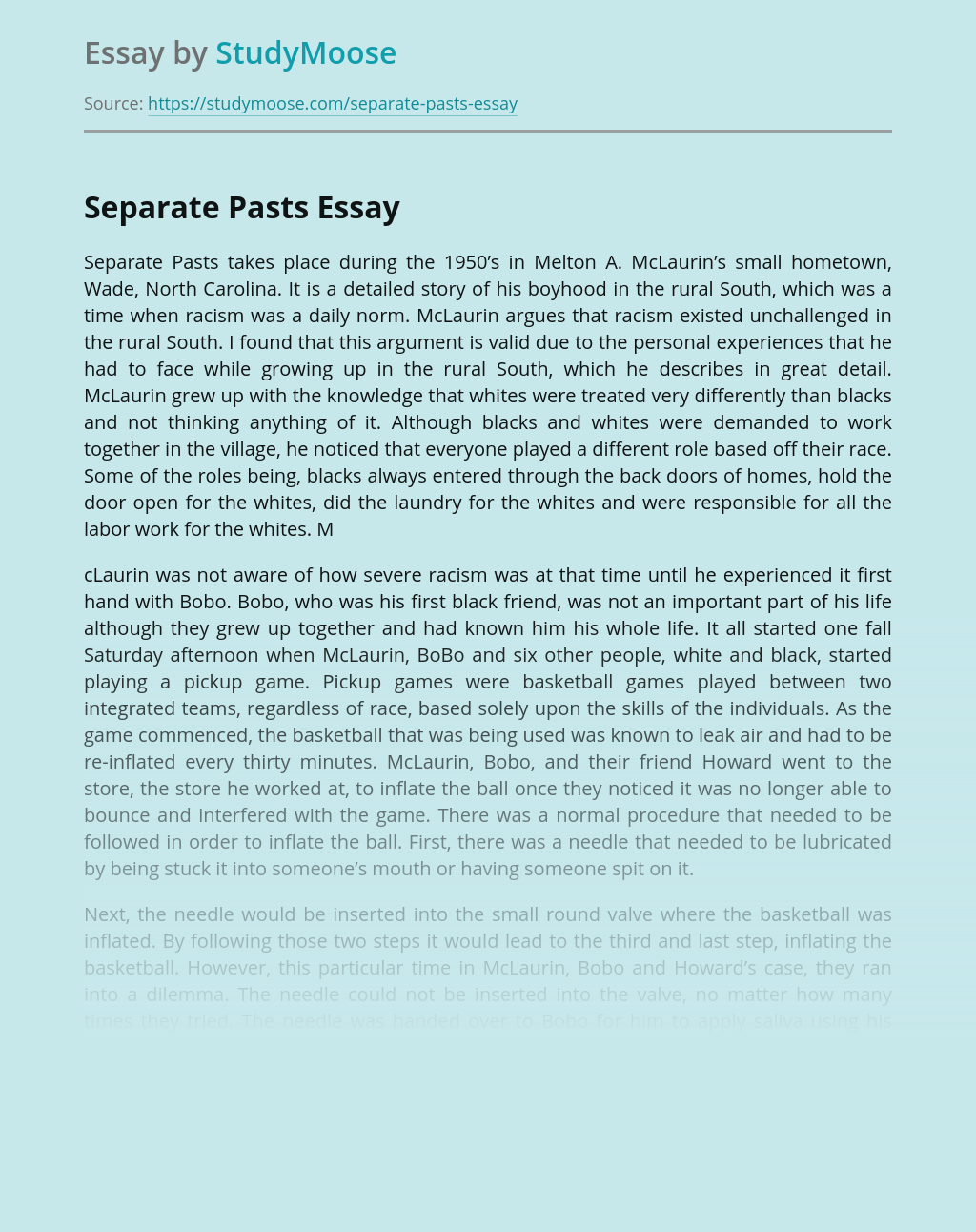 Don’t waste time
Get a verified writer to help you with Racism in a Story Separate Pasts
Hire verified writer
$35.80 for a 2-page paper
Stay Safe, Stay Original