If teachers teach prejudice to white students with a novel that is alienating to blacks then can it be said that it perpetuates racist priorities? Huckleberry Finn should not be taught in schools due to its insensitive and prejudicial effects on all students. The Adventures of Huckleberry Finn by Mark Twain uses many racial terms that clearly reflect on the 1850s time period. This makes students uncomfortable while reading it and can lead to a discussion that reinforces racial stereotypes within the classroom.

Don't use plagiarized sources. Get your custom essay on
“ Racial Stereotypes Within the Classroom in The Adventures of Huckleberry Finn by Mark Twain ”
Get custom paper
NEW! smart matching with writer

While Huckleberry Finn has been around for over a hundred years and is considered to be a great historical text in American literature, the novel’s message is shown in a offensive way through language that is harmful to students. African – American adults from high school share their feelings and experiences: “I can still recall the anger I felt as my white classmates read aloud the word ‘nigger.’. .. I wanted to sink into my seat. Some of the whites snickered, others giggled…I only recall the sense of relief I felt when I would flip ahead a few pages and see that the word ‘nigger’ would not be read in an hour” (Ballard/Carey-Webb 32).

Educators also find this issue problematic and say, “How am I supposed to explain to a black student that they will be embarrassed/humiliated so that I can educate their fellow white students about racism? The whole idea seems racist at the core; once again, white students and their needs are being put first” (Hengstebeck/Carey-Webb 32).

Teachers are in a position where they may feel uncomfortable talking about the novel. In the novel, Twain satirizes characters which can be difficult to interpret. Messent says that even Huck has a “casual acceptance of African-American’s dehumanised status” in the passage that says, “.. .when Aunt Sally asks if anyone was hurt in a reported riverboat explosion, and Huck himself answers “No’m. Killed a nigger,’ she replies, ‘Well, it’s lucky; because sometimes people do get hurt.” (Messent 2) Language like that in a novel that is taught to thousands of high school students every year seems wrong. Some students may think that Twain believed African-Americans are somewhat expendable. Satirical or not, students will always feel uncomfortable when reading a book like Huck Finn, regardless of race. The novel poses an issue in school systems that needs much more attention that acknowledges the sensitivities of every student.

The controversy of the book has not become much of an issue as it has in today’s society. When Huckleberry Finn is taught in a high school class, the students of that class are expected to understand why racial language is used in the text. Although it is satirical, not every student will think of the novel as a “satirical representation” of the late 1800s. African-American students may feel uncomfortable reading such texts aloud in class, or angry if peers are giggling or wandering their eyes in the classroom toward them. Teachers need to decide what side they believe is right and think about whether teaching an offensive but historical novel to teenagers is going to affect them in any kind of negative manner. With so many former high school students and teachers sharing their negative experiences with learning or teaching the novel, it is hard to deny that Huck Finn is affecting students from any ethnic background.

Even though Mark Twain’s novel shows enough racial insensitivity to remove the book from schools, the novel does have its merits as one of the most classic novels in American literature. It is a gateway to a better understanding of southern society in the late 1800s. An appraisal by Ernest Hemingway says, “All modern American literature comes from one book by Mark Twain called Huckleberry Finn. … There was nothing before. There had been nothing as good since.” (22) In Hemingway’s opinion, Huck Finn has influenced many other books. Another example is, “He (Jim) is the archetypal ‘good nigger,’ who lacks self respect, dignity and a sense of self separate from the one whites want him to have. A century of white readers have accepted this characterization because it permits their own ‘humanity’ to shine through with more luster.” (Carey-Webb 25) This quote describes how calling an African-American the “n-word” makes whites feel almost as if they are superior to everyone else. Which is morally wrong in every aspect. Other experts also find value in the novel: “In reading Huckleberry Finn it is important to recognize the power of language, in particular racial epithets” (Carey-Webb 31). The book can be good for teaching students to understand these racial epithets and leave why they are hurtful. These quotes all show that the novel is a really great book in terms of historical literary text.

There are plenty of other works of literature that would be more suitable for all students and more effective in creating a more stable, anti-prejudice environment among students. The novel shows its merits through its history of being taught. But there was a specific time for teaching the book and in today’s world, that is not now. Racial tensions and issues alike are resurfacing now more than ever before and to teach a novel that will very well likely offend so many people seems like a practice that should be nonexistent. We are currently living in a world that has many issues with racial equality and more discrimination than previous years. People of today’s society can help suppress this racial tension by taking the first step of removing The Adventures of Huckleberry Finn.

Carey-Webb’s journal entry shows an extensive analysis of multiple controversial topics about The Adventures of Huckleberry Finn. These topics include the censorship of the novel and whether the novel should be taught in high school or not due to its offensive language. These topics are explained thoroughly and precisely with non-biased information; perfect for a reference article.

In the text, Carey-Webb includes rich, detailed information regarding the controversial topics of the novel, The Adventures of Huckleberry Finn. This text can be guessed to be extremely biased and unreliable but in truth the article is more of a collection of observations and facts written into an entry that is unbiased.

This text can be applied to many different styles of argument essays as a reference article. It has plenty of points of information for both sides of any argument. Which shows that because of its unbiased nature, it is a worthy reference article. Any high school student doing any kind of an argument essay on The Adventures of Huckleberry Finn would deeply benefit from this article.

Messent’s article gives a directed pathway to information based on one side of an argument. The article blends simplicity with a slight bias but ultimately gives effective and useful information regarding arguments concerning The Adventures of Huckleberry Finn. But all of this information has viable evidence as support which increases the validity of the article.

In the article, Messent talks about how Mark Twain’s use of the “n-words” are unacceptable in the Adventures of Huckleberry Finn. His article includes information about one side of an argument. It seems to be displaying a slight bias within the information while still getting to the point. But it is an honest article about informing the audience of this particular point of view.

This article was created by a journalist for the newspaper, The Guardian, which seems to show its slight biased nature. Even though the article might be biased, it has great information on the specific side of an argument about the censorship of the novel, The Adventures of Huckleberry Finn. This article is a great source for an argument style essay.

Racial Stereotypes Within the Classroom in The Adventures of Huckleberry Finn by Mark Twain. (2021, Sep 27). Retrieved from http://studymoose.com/racial-stereotypes-within-the-classroom-in-the-adventures-of-huckleberry-finn-by-mark-twain-essay 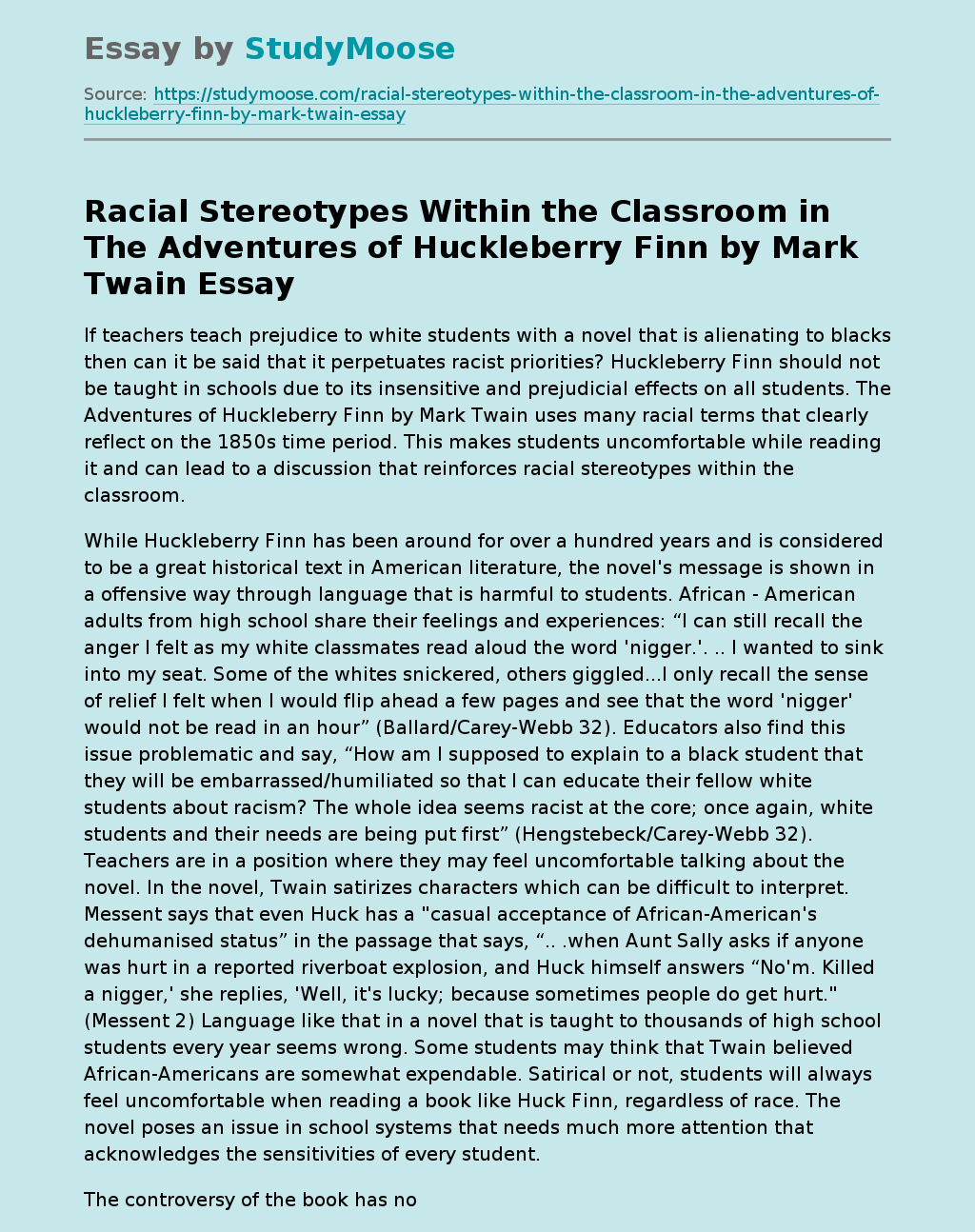