Racial profiling has influenced many people across the world; it has been a huge problem which needs to be resolved. The points discussed in this paper basically touch on why racial profiling is unacceptable and how it needs to be sustained. Why minorities shouldn’t have to suffer because of false stereotypes; also shouldn’t have to deal with bias opinions of the law. America is the land of the free also a place where second chances are embraced. There’s points made on how people reacted to racial profiling, and some resolutions.

Don't use plagiarized sources. Get your custom essay on
“ Racial profiling and law enforcement ”
Get custom paper
NEW! smart matching with writer

The ultimate goal is to minimize this epidemic in hopes people can start raising more awareness about the matter and find a way to make it work.

The Authenticity of Racial Profiling and Law Enforcement

Researchers believe law enforcement officers tend to prey on people of minority and watch closely in hopes for them to commit crime. Seemingly officers spend more time worrying about minorities than whites.

Imaginably a young black male was observed driving by an officer in a nice vehicle going through a white neighborhood. The officer would probably find a reason to pull the driver which is called profiling. A lot of suspects are profiled because of prior history in the system, or stick out due to their environment. “For example, if someone who is obviously poor is frequently seen in a more affluent neighborhood, such a person may be profiled as someone with possible criminal intent” West Encyclopedia of Law (2005). This activity by law enforcement is unjust; sadly most of the officers believe they can do whatever they please.

The citizens of the United States have certain rights to privacy; officers need to identify definite criminals making sure they are absolutely committing crimes.

Studying this topic is worth the argument because of the disreputable nature of how law enforcement bases their bias assumptions of minorities. Granted some criminal minorities do spend a lot of time in the system which is a fact, but also a good amount get rehabilitated and want to start a fresh private life, which they are entitled to. “It is a degrading practice and continues largely unchecked, violating the human and civil rights of those targeted” One America (2010). This issue raises a bunch of questions that should be looked into further, and examined much deeper. The general understanding of racial profiling is pre determining a minority is committing a criminal act, therefore should be approached by law enforcement. The law states that you are innocent until proven guilty in a court of law; hence minorities should remain innocent as well as driven free from prior judgment before found guilty of anything. This conduct ties in with the current understanding of the crime, now someone just has to find a reasonable solution for both sides. With immense exposure of profiling tirades along came reaction. People believe evidence must be obtained in order to even pursue a suspect.

Reasonable suspicion or reasonable doubt is a word an officer might use believing their suspect may have been armed, or a threat to society. Though the officer must be held accountable for the reasons he or she selected to approach the minority. The monumental Supreme Court case Terry vs. Ohio helped to shed tremendous light on the matter. The case pretty much made racial profiling harder to conduct for police. A law was passed because of this case which it made officers have to retain a search warrant in order to search a civilian’s property or belongings. Also law enforcement is unable to stop and frisk someone anywhere they please, for example a high crime area. On the other hand some officials believe racial profiling is necessary because it can save people from criminal activity before it begins, sparing injury to anyone. Protectors of profiling do not approve of the racial component of the matter. Defenders believe identifying tendencies of a criminal and being proactive make a decent officer. Even though my viewpoint does not approve of the defenders, the opinion has to be shared and addressed. Much of the perception of profiling really just has to do with the training of the particular officer and where they get their discipline. 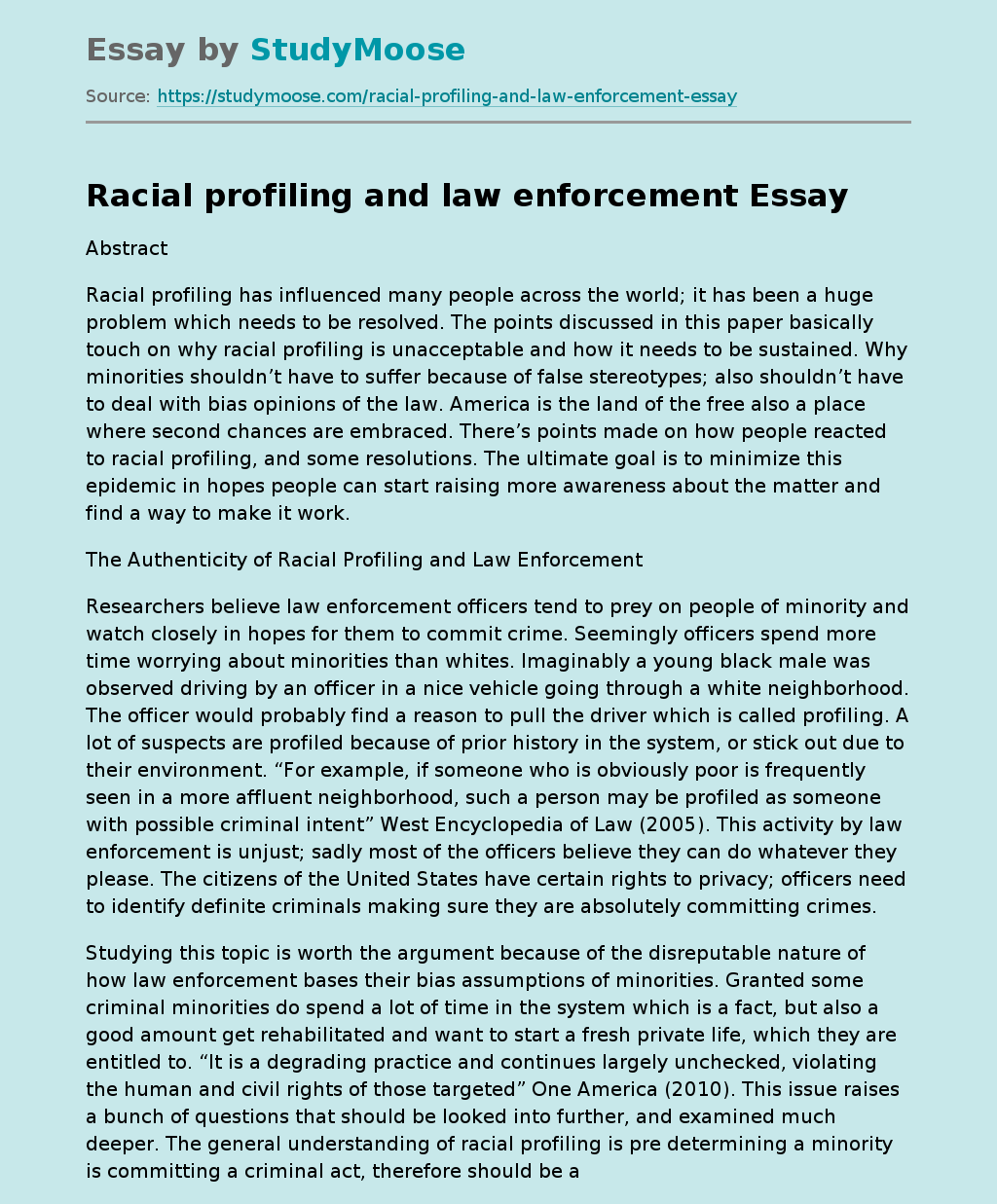