A discussion of racial hatred in “Cry, the Beloved Country” by Alan Paton.

The purpose of Cry, the Beloved Country, is to awaken the population of South Africa to the racism that is slowly disintegrating the society and its people. Alan Paton designs his work to express his views on the injustices and racial hatred that plague South Africa, in an attempt to bring about change and understanding. The characters that he incorporates within his story, help to establish a sense of the conditions and hardships that the country is experiencing, and the presence of fear through the whole of the populace.

Don't use plagiarized sources. Get your custom essay on
“ Racial Hatred in “Cry, the Beloved Country” ”
Get custom paper
NEW! smart matching with writer

Presenting the characters as having one-sided personalities or by referring to them by a simple label, Paton indicates that these evils are universal and fundamental within human nature. As Stephen Kumalo searches for his son, Absalom, Paton has several events befall onto Kumalo in order to represent the harsh society that many of the blacks live in. The first event occurs when Kumalo arrives in Johannesburg, afraid from the stories that he has heard, he puts his trust in another black man who appears to be of good intentions, but in reality cheats Kumalo of his money.

This experience is unlike his time on the train, in which Kumalo had been treated with immense respect. On the train he is aware of the respect that other blacks hold for him, because he is a man of God, though, in the city, his social standing demonstrates little significance. This may be taken as a sign that the idea of a God may be questioned or less acceptable to the people, when they have positions in a society that are cruel and not beneficial.

Kumalo does find assistance when he asks for help from an older man, who kindly escorts him to the Mission House. The contrast that Paton creates here is the fact that not all blacks think with the same purpose, a common characteristic of stereotypes, which Paton feels the people should rise above. He seeks to imply that judgement of a person should be based more on the content of character, rather than the general assumptions of a society. This is a requirement in his plan to restore a land that is slowly falling apart. The next character that is introduced is Kumalo’s sister, Gertrude. As soon as she sees her brother, she becomes engulfed by fear. She proclaims she wishes to return to Ndotsheni, but feels unworthy because of what she has become. She agrees to go back to her homeland, but in the end, abandons Kumalo and her child. Kumalo’s brother, John, is the next of his family to be confronted. “[John] is corrupt and deceitful, and betrays his brother and nephew at the first opportunity” (Hogan, 206). Msimangu, though, feels that if John were not corrupt, he would not solve problems, but “plunge this country into bloodshed” (Paton, 187). As a charismatic speaker, John has the ability to raise the blacks against the whites, but is too frightened to, fearing the possible retaliation of the whites. Paton’s description of these characters, denote their immoral natures and the fear that exists within their lives, which he feels may be due to their corrupt surroundings and the oppression that they must endure. As a foil to the degrading conditions of the city, Paton expresses situations in which the factor of color seems vacant. One such occasion is seen as Kumalo is in the mission, and he observes that the “black and white priests [are] eating together”(Alexander, 15). Paton involves this incident, to show that their is still a possibility that blacks and whites can co-exist peacefully. Arthur Jarvis’ attempt to create a tranquil society, plays a contradiction as well to the fact that the oppression of the blacks is brought on by the whites. It plays contrary in that not all whites seek to oppress, and that there are people who wish to create an equal society. This is another example of Paton’s wish to ascend above the use of stereotypes. Arthur’s murder by Absalom, a black man, is a powerful statement that Paton wants to express. The fact that Arthur wished to help the blacks, and is later murdered by one, is Paton’s attempt to show that this greed and hatred that exist within man, may destroy the chances for a better society. He feels that man must better himself in order to accomplish this improvement, by releasing the anger and hatred that is contained within. Absalom’s arrest and sentence to death is another powerful proclamation, in that it signifies what may become of man if he does not improve these conditions. Similar “to the rebellious son of King David” (Alexander, 16) in the bible, Absalom goes against the ideals of his father. After he commits the murder of Arthur Jarvis and is given a death sentence, we see a change in Absalom, an image of what may have become of Absalom had he chosen a different path. Contained within him is regret and remorse, as he considers the alternatives to his lifestyle. Paton views this affair as what may be the conclusion to mankind, in that a change may occur within man, but the change may occur too late and the destruction of mankind will be inevitable. The relationship that develops between James Jarvis and Stephen Kumalo, is Paton’s idea of what needs to come about in order to restore the dying land. A bond that emerges between the two different colors, to bring about a cooperation and understanding of each other is necessary for the revival of the country. As Kumalo learns of what is needed to improve the land in which he lives, more possibilities of the hope of restoration and renewed beginnings can be seen. Examples include Gertrude’s son, Jarvis’ grandson and Kumalo’s unborn grandchild; they represent the new generation that can help bring about the needed changes and to aide in the healing of the dying land. So in conclusion, Paton seeks to provoke a change in the conditions of the society before the deterioration of the people will be beyond redemption. In order to accomplish this, man must first rise above the generalities and hatred that each race has for each other. This is a necessary step in order to advance and create a harmony that will rebuild their country, and remove the segregation that runs rampant throughout the community. WORKS CITED Alexander, Peter. “Man and manifesto.” Times Higher Education Supplement, August, 1994, 15-16. Hogan, Patrick C. “Paternalism, Ideology, and Ideological Critique: Teaching Cry, The Beloved Country.” College Literature, October, 1992, 206. Paton, Alan. Cry, the Beloved Country. New York: Collier, 1987. 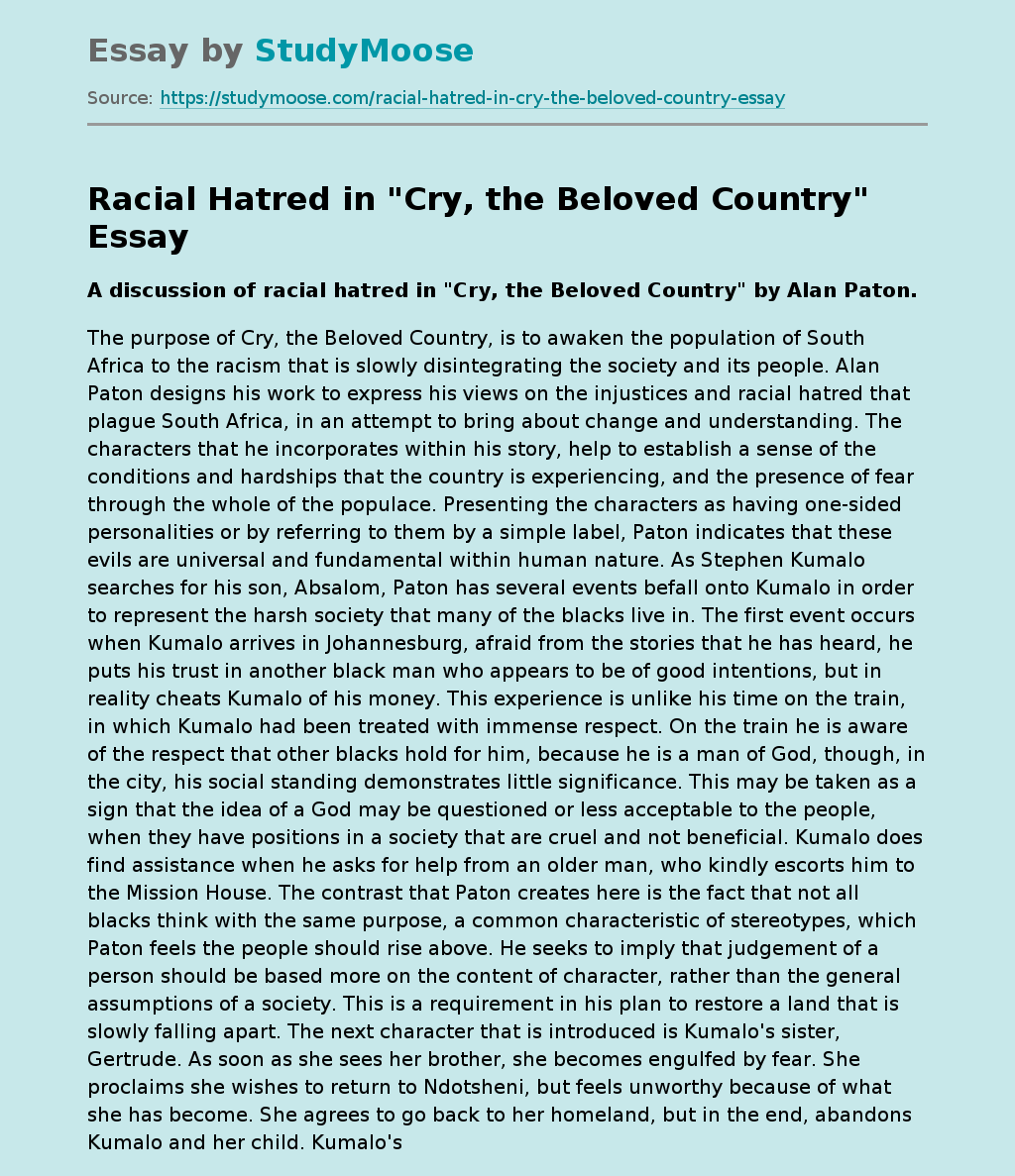