Racial Formations by Michael Omi and Howard Winant, in my eyes, successfully explained how we as a society view race and gives us a sense of how it is observed within social contexts. Omi and Winant used media, ideas, and everyday examples to portray their views about race. Omi and Winant’s article began with the Susie Guillory Phipps’s case about how she had (Omi and Winant 2014) “unsuccessfully sued the Louisiana Bureau of Vital Records” (p.13) because she wanted to change her racial distinction from black to white on her birth certificate.

Don't use plagiarized sources. Get your custom essay on
“ Racial Formation ”
Get custom paper
NEW! smart matching with writer

Phipps argument was that racial classifications were unconstitutional.

However, the court had upheld the belief that classifying individuals based on race was indeed constitutional. The Phipps case demonstrated for many centuries, that the United States had always tried to define race and how it is to fit within our social context. Omi and Winant then goes on to say this struggle to define race is not only seen in the United States, but is seen in other locations around the world, such as Europe.

With exploration of the new world, many Europeans had believed that anyone who was not white had to have lesser freedom, if any at all, because these non-white were seen as inferior and less fit for society. Even to this every day, many individuals try to discover the “scientific meaning” of race. These individuals want to argue that race in not (Omi and Winant 2014) “social, political, or economic determination” (p. 15) but instead race can be found within an individual’s underlying characteristics which can be identified through skin color or physical attributes.

Omi and Winant further showed how race can be seen as a social concept as well. For example, they explained how many people in contemporary British politics use the term black to mean any nonwhites, which surprisingly has not lead to any retaliation by any people. As a matter of fact, some Asian and Afro-Caribbean youth are using the term for self identity. Omi and Winant explains this phenomenon as “racial formations” which refers to the (Omi and Winant 2014) “process of by which social, economic, and political forces determine the content and importance of racial categories, and by which they are shaped by racial meanings” (p.15).

Omi and Winant also goes on to explain within everyday life, individuals tend to create racial identities for others. These preconceived thoughts are like expectations we give ourselves about other races. These preconceived thoughts did not just occur over night, they are a result of the historical events that has occurred over time and still shape the way we think about other races to this very day.

Constructing Race, Creating White Privilege by Pem Davidson Buck illustrated from the beginning of European colonization, there was a sense of how white individuals granted themselves privileges that no other race could have. To keep these racial privileges separate, laws such as the one in 1691punished European women who married African Americans or Native American men.

The white individuals were so driven to separate themselves from other races, that European men who had children with an African or Native American, or any slave for that matter, were not responsible for the children. This meant that African American or the Natives did not become wealthy and was done so that the white people did not feel threatened by other race’s power. Buck then goes on to say that (2014) “Whites had an equal interest in the maintenance of whiteness and white privilege, and that it was the elite” (pg.35).

This meant that white supremacy was taught to others and thus engraved in their minds for years after. All this was created so that whites would have power over other races. Additionally, whites reserved the right to whip African Americans; however, it was illegal to whip white people. On top of this, African Americans were denied the right to having a family just because husbands could have authority for their wives and not their owners. Buck then goes into talks about Psychological Wage. Buck describes psychological wage as having a feeling of superiority for the poor whites because their whiteness made up for the terrible economic situation they were in. This sense of superiority further helped the rich whites because the poor had supported this separate racial system and thus the rich had control of labor and the economy.

Racial Formation. (2016, May 08). Retrieved from https://studymoose.com/racial-formation-summary-essay 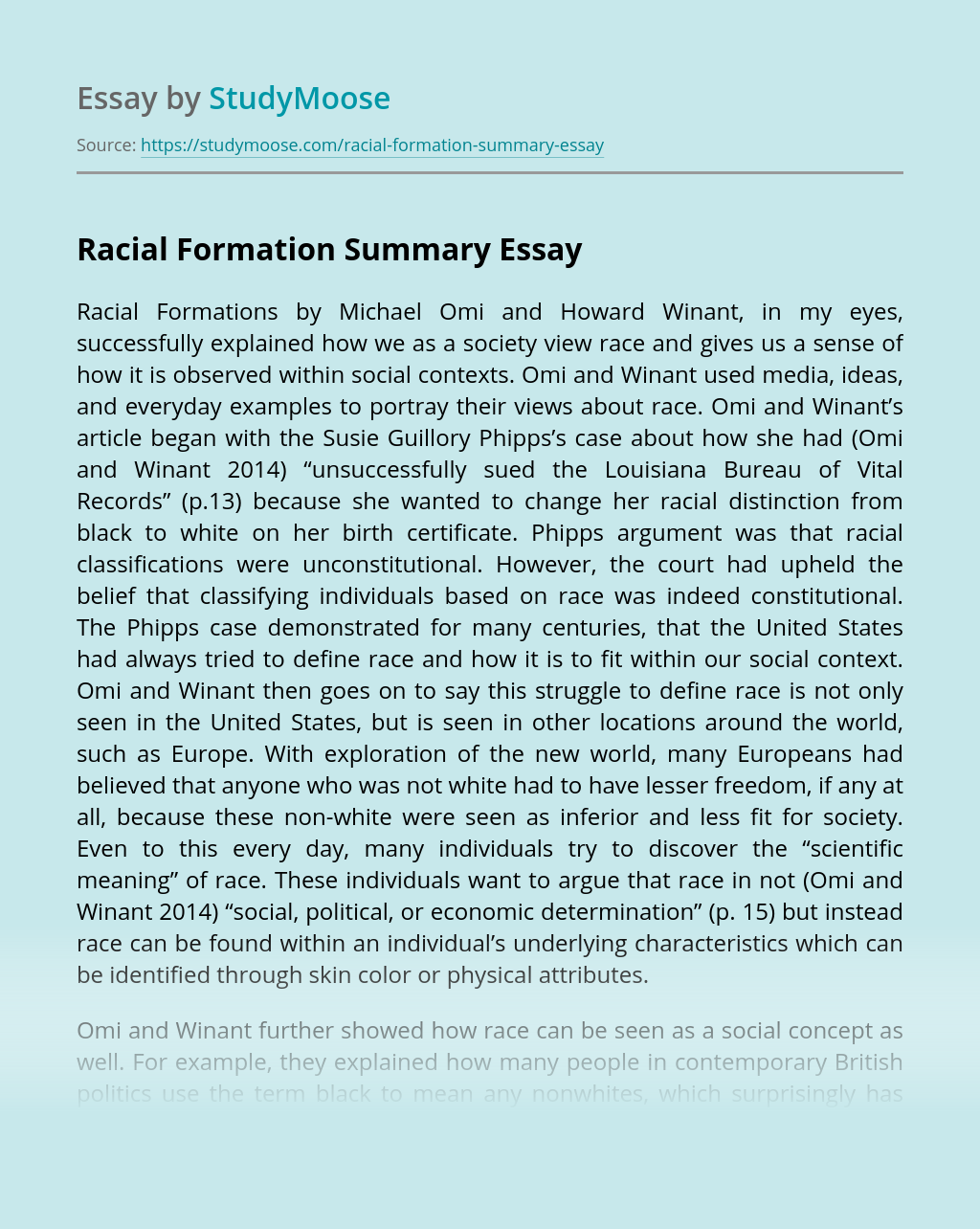