ABSTRACT: Racial Discrimination is when a person is treated less favourably than another person in a similar situation because of their race, colour, national or ethnic origin or immigrant status. In The Bluest eye ,Morrison took a different approach to the traditional White-Versus-Black racism. She acknowledged that most people are unaware of the racism that exists within a culture and often the racism that exists within themselves. Morrison’s essay describes a world free of racial hierarchy as dreamscape and unrealistic.

Don't use plagiarized sources. Get your custom essay on
“ RACIAL DISCRIMINATION IN TONI MORRISON’S ”
Get custom paper
NEW! smart matching with writer

Instead of such an imaginary place her works acknowledge cultural divides and the racism that exists within them. The middle class black society and the lower class black society, for example, are quite different from each other and are constantly conflicting .In The Bluest Eye ,Morrison distinguishes these divisions and their tensions through characters like Geraldine, Junior and Maureen Peal, who represent the privileged division of black culture .On the contrary,the less privileged division is represented by the MacTeer family and the ‘relentlessly and aggressively ugly’Breedlove family.

Tension between the divided African American society is clearly represented by such characterization throughout Morrison’s Novel.

African American literature is literature written by, about and sometimes specifically for African Americans, the black settlers in America. When the Africans settled in America, they were treated brutally by the Americans. They used them for their favour and hardly treated them as human beings. They wanted to show their protest so they used literature as the weapon to show their protest. The poet Phillis Wheatley and orator Frederick Douglass were considered to be the beginners.

Chloe Anthony Wofford was born on Feb18, 1931,in Lorain, Ohio. She was second oldest of four childern. Her father George Wofford was a welder and her mother Ramah was a Chruch going women and sang in the choir.She took Latin in school and read many great works of European Literature. She was graduated in Lorain high school with honour in 1949.At Howard University, she was major in English and chose the classic for her minor. Since many people could not pronunce her name properly, she chose to cal herself Toni. After graduation in 1953 Toni continued her education at Cornell University. She married Harold Morrison and had two sons. But her married life was unhappy. Morrison went to work for Random House, were she edited works for such authors as Toni Cade Bambara and Gayl Jones.

Mothers are almost always absent from the lives of Morrison’s characters ,having abandoned their children, died or simply disappeared .Despite the horrors of dislocation and slavery African American community searches for their Motherland, this was portrayed in the novels of Toni, as the absence of Mothers.

The Novel ”JAZZ” begins with a recap of Dorca’s murder and violet’s attack on her corpse. The couple that kill and then defaces the young girl seem immediately to be evil and immoral characters, but surprisingly Morrison goes on to flesh them out and to explain, in part ,that violet acts stem from suppressed anguish and disrupted childhoods.

Racial discrimination is to treat differently a person or group of people based on their race.Power is a necessary precondition, for it depends on the ability to give or withhold social benefits, facilities, services, opportunities etc, from someone who should be entitled to them and are denied on the basis of race, colour or national origin.

Racial discrimination is when a person is treated less favourably than another person in a similar situation because of their race, colour, descent ,national or ethnic origin or immigrant status.

For example, it would be ‘direct discrimination’ if a real estate agent refuses to rent a house to a Person because they are of a particular racial background or skin colour.

It is also racial discrimination when there is a rule or policy that is the same for everyone but has an unfair effect on people of a particular race, colour descent , national or ethnic origin or immigrant status. This is called ‘indirect discrimination’.

For example, it may be indirect racial discrimination if a company says that employees must not wear hats or other headwear at work, as this is likely to have an unfair effect on people from some racial/ethnic background. THE BLUEST EYE

Morrison’s first novel, The Bluest eye, was published in 1970.It tells the story of a young African American girl who believes her incredibly difficult life would be better if only if only she has blue eyes.

When society is racist against a person ,the victim can avoid those within society who have become particularly offensive .But when the dear and near ones reject them, there is no escape from the pain, At this time,a person become completely immersed in misery and go insane .This is the fate of Pecola Breedlove . For Pecola, constant abuse by society and her family made her so utterly alone. Her brother runs away from home by encouragement from his mother ,who rejects the family and goes to work for a white family .By working for the white family , she got everything that she wanted and was needed .In doing so, she rejects the needs of her family entirely , not even her own daughter could call her “mother” instead she forces to call her “Mrs .Breedlove” , a symbol of the unfamiliarity of the connection that should be filled with love, but is only filled with hatred and rejection.

This increased when Pecola is raped by her father,followed by her mother beating her until the baby dies .This final blow ,the hopelessness of rejection caused by both the internal and external racism, was what drove Pecola insane, and would drive any person to madness ,because the pain that this racism caused is the pain of being alone, a pain which no human can bear. The abuse from racism is never forgotten , it leaves a scar “the pain may recede after time ,but the scar remains”

Pecola Breedlove,a eleven year old little black girl, is plain and homely. By orders of the country, the Macteers take Pecola into their home to temporarily take care of her until the Country finds another home for her. It is here that she meets and becomes best friends with Claudia and Frieda. She is not happy with herself and longs for blue eyes, as they are symbolic of American white beauty. Pecola has a very difficult life growing up, as people torment her for being black and ugly. She is also raped by her father, and eventually becomes pregnant with his baby. However, the baby dies. Her mother treats her coldly, as she believes Pecola is ugly and is ashamed of her.

Morrison introduces the adult character Geraldine late in the novel in order to depict the same-race racism as widely spread among the ages. Geraldine’s racism is plainly stated when she warns her son that there are obvious “difference between coloured people and niggers. Coloured people are neat and quiet; niggers are dirty and loud “(The Bluest eye). Geraldine is not only warning her son of these differences, but she is also spreading a racial stereotype.

Toni uses the symbol, Hollyhock flower as beauty, confidence and strength of the privileged black society.

She uses Dandelions as the less privileged black society (i.e.) lower class as ugly, useless, unwanted. As member of the less privileged society, Pecola associates well with the dandelions and believes “they are pretty”. Pecola sees the beauty in the dandelions that she is actually seeing the beauty in herself and in her society, while others do not. Geraldine’s cat represents yet another symbol of the privileged society. The cat is “as clean and quiet as she is”. Geraldine’s son, Junior was neglected by his self-absorbed, cat-loving and nigger-hating mother. Junior revolts against his mother’s racist beliefs by abusing the cat which represents all that is dear to her. Junior feels out of place and drawn towards the black children his mother shuns.

Claudia and Frieda give up the money they had been saving and plant Marigold seeds in hopes that if the flowers bloom, Pocola’s baby will live; the Marigolds never bloom. This shows that the younger generation accepts all the people equally.

“Everyone is a child of God and all are created equally”.

Racial discrimination is not only the problem of previous generations. Even in this century, one could find the practice of racial discrimination. For instance, the popular dancer Michael Jackson underwent many cosmetics, operations and tolerated pains to show that he too could be on par with white people with white skin. 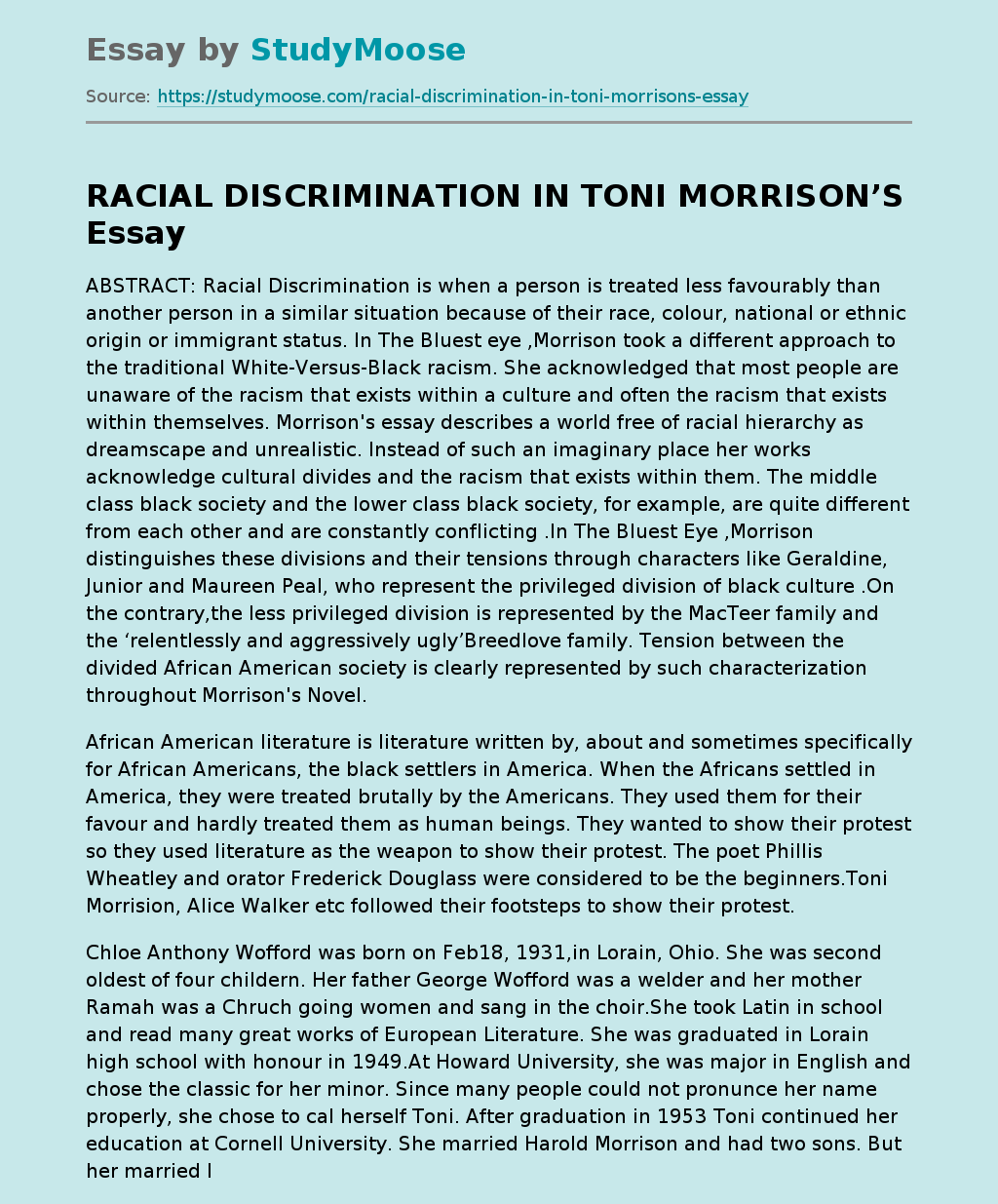