Numerous study have found widespread racial bias in US criminal justice system. A new report issued by a coalition of civil rights organizations calls the “massively and pervasively biased” treatment on blacks and Hispanics by the US police and courts the major civil rights problem of the twenty-first century entitled “Justice on Trial : Racial Disparities in the American Criminal Justice System.” The study finds that minorities in the US face discriminatory treatment at every stage of the judicial process, from arrest to incarceration.

Don't use plagiarized sources. Get your custom essay on
“ Racial bias in the criminal justice system ”
Get custom paper
NEW! smart matching with writer

The 95 page report was issued by the Leadership Conference on Civil Rights based in Washington DC. It’s findings show that blacks, Hispanics and other minorities face unfair targeting by police and other law enforcement officials, racially biased charging and plea bargaining decisions by prosecutors and discriminatory sentencing by judges.In a report released from Washington DC- Amnesty International criticized Us Federal and state justice systems as riddled with racial discrimination. The report, Racism and the Administration of Justice, cites as evidence the disproportionate rate of minorities incarcerated, sentenced to death, and executed in the US.

In its report, Amnesty International cited cases of racial profiling, unlawful use of force, unlawful shootings, and deaths in custody affecting minorities from at least 10 states in the US.

African American women are imprisoned at eight times, and Hispanic women at four times, the rate of white women.The overwhelming majority of victims of police brutality, unlawful shootings and deaths in custody are members of racial minorities.

A study of 2,000 murder cases in Georgia found that the odds of a death sentence in cases in which blacks murdered whites were s much as 11 times higher than when whites murdered blacks. A study found that in Philadelphia a black defendant is four times more likely to receive a death sentence than a white defendant. Racism that perverts the course of justice is a daily fact of life for many in the US, yet this plague of bias is over looked, ignored or openly tolerated by police chiefs , prison wardens, judges and our political leaders.Today a full two-thirds of America’s two million prisoners are people of color. One million are African American and 400,000 are Hispanic/ Latino. People of color represent one third of those arrested for drug crimes, but two-thirds of those sent to prison. Whites and racial minorities live in completely different worlds when it comes to the American criminal justice system.. Since as far back as the 1920’s minorities have been over-represented in federal and state prisons.

Minorities were then 25% of all prisoners while only about ten percent of the total population.The Kerner Commission warned in its report: “Our nation is moving towards two societies, one black, one white-separate and unequal.Coramae Richey Mann, Unequal Justice, suggests that white Americans view the classic rapist as a “black man,” the typical opium user as a “yellow man,” the archetypal knife wielder as a “brown man,” the “red man” as a drunken Indian, and each of these people of color as collectively constituting the “crime problem”.

The race or ethnicity of the stereotyped perpetrator varies between African American, Hispanic, or Native American depending on the nature of the crime or the section of the country.These prejudicial images provide a social-psychological under girding upon which many of the discriminatory aspects of the criminal justice system are constructed.Racial Discrimination is defined as including any distinction or impairing the exercise of a person’s human rights. The discriminatory treatment of people of color in the criminal justice system fits squarely under this standard. 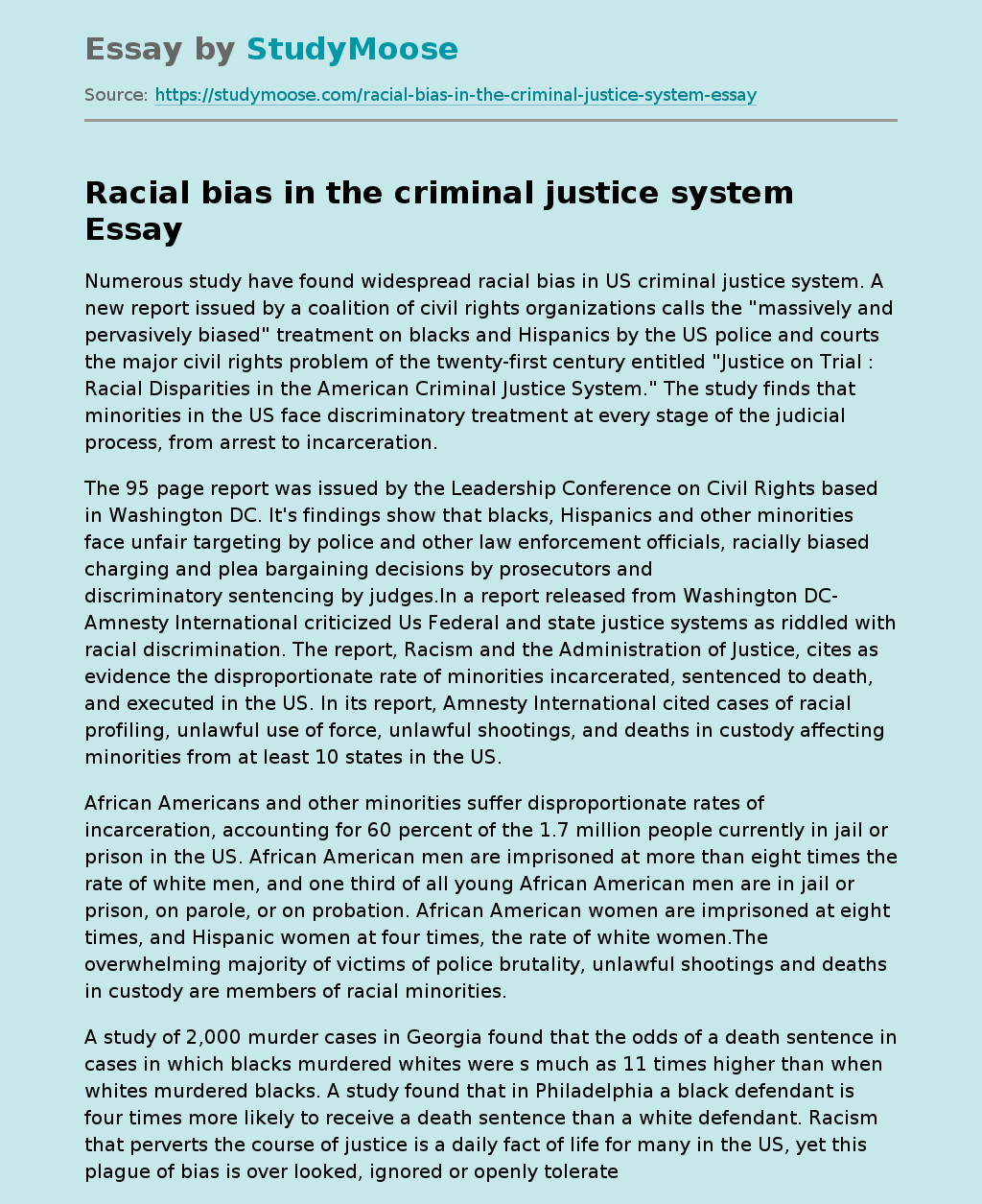