R. K. Narayan (born 1906) is one of the best-known of the Indo-English writers. He created the imaginary town of Malgudi, where realistic characters in a typically Indian setting lived amid unpredictable events. Rasipuram Krishnaswami Narayanswami, who preferred the shortened name R.K. Narayan, was born in Madras, India, on Oct. 10, 1906. His father, an educator, travelled frequently, and his mother was frail, so Narayan was raised in Madras by his grandmother and an uncle. His grandmother inspired in young Narayan a passion for language and for people.

Turn in your highest-quality paper
Get a qualified writer to help you with
“ R.K Narayan Biography ”
Get high-quality paper
NEW! AI matching with writer

He attended the Christian Mission School, where, he said, he learned to love the Hindu gods simply because the Christian chaplain ridiculed them. Narayan graduated from Maharaja’s College in Mysore in 1930. In 1934 he was married, but his wife, Rajam, died of typhoid in 1939. He had one daughter, Hema. He never remarried. Narayan wrote his first novel, Swami and Friends, in 1935, after short, uninspiring stints as a teacher, an editorial assistant, and a newspaperman. In it, he invented the small south Indian city of Malgudi, a literary microcosm that critics later compared to William Faulkner’s Yoknapatawpha County.

More than a dozen novels and many short stories that followed were set in Malgudi. Narayan’s second novel, Bachelor of Arts (1939), marked the beginning of his reputation in England, where the novelist Graham Greene was largely responsible for getting it published. Greene has called Narayan “the novelist I most admire in the English language.” His fourth novel, The English Teacher, published in 1945, was partly autobiographical, concerning a teacher’s struggle to cope with the death of his wife.

In 1953, Michigan State University published it under the title Grateful to Life and Death, along with his novel The Financial Expert; they were Narayan’s first books published in the United States. Subsequent publications of his novels, especially Mr. Sampath, Waiting for the Mahatma, The Guide, The Man-eater of Malgudi, and The Vendor of Sweets, established Narayan’s reputation in the West. Many critics consider The Guide (1958) to be Narayan’s masterpiece.

Told in a complex series of flashbacks, it concerns a tourist guide who seduces the wife of a client, prospers, and ends up in jail. The novel won India’s highest literary honor, and it was adapted for the off-Broadway stage in 1968. At least two of Narayan’s novels, Mr. Sampath (1949) and The Guide (1958), were adapted for the movies. Narayan usually wrote for an hour or two a day, composing fast, often writing as many as 2,000 words and seldom correcting or rewriting. Narayan’s stories begin with realistic settings and everyday happenings in the lives of a cross-section of Indian society, with characters of all classes. Reviewing Narayan’s 1976 novel The Painter of Signs, Anthony Thwaite of the New York Times said Narayan created “a world as richly human and volatile as that of Dickens.”

His next novel, A Tiger for Malgudi (1983), is narrated by a tiger whose holy master is trying to lead him to enlightenment. It and his fourteenth novelTalkative Man (1987) received mixed reviews. In his 80s, Narayan continued to have books published. He returned to his original inspiration, his grandmother, with the 1994 book Grandmother’s Tale and Other Stories, which Publishers Weekly called “an exemplary collection from one of India’s most distinguished men of letters.” Donna Seaman of Booklist hailed the collection of short stories that spanned over 50 years of Narayan’s writing as “an excellent sampling of his short fiction, generally considered his best work” from “one of the world’s finest storytellers.” Narayan once noted: “Novels may bore me, but never people.”

R.K. Narayan was born in Madras, South India, in 1906, and educated there and at Maharaja’s College in Mysore. His first novel, Swami and Friends and its successor, The Bachelor of Arts, are both set in the enchanting fictional territory of Malgudi and are only two out of the twelve novels he based there. In 1958 Narayan’s work The Guide won him the National Prize of the Indian Literary Academy, his country’s highest literary honor. In addition to his novels, Narayan has authored five collections of short stories, including A Horse and Two Goats, Malguidi Days, and Under the Banyan Tree, two travel books, two volumes of essays, a volume of memoirs, and the re-told legends Gods, Demons and Others, The Ramayana, and the Mahabharata. In 1980 he was awarded the A.C. Benson Medal by the Royal Society of Literature and in 1982 he was made an Honorary Member of the American Academy and Institute of Arts and Letters. Narayan died in 2001. 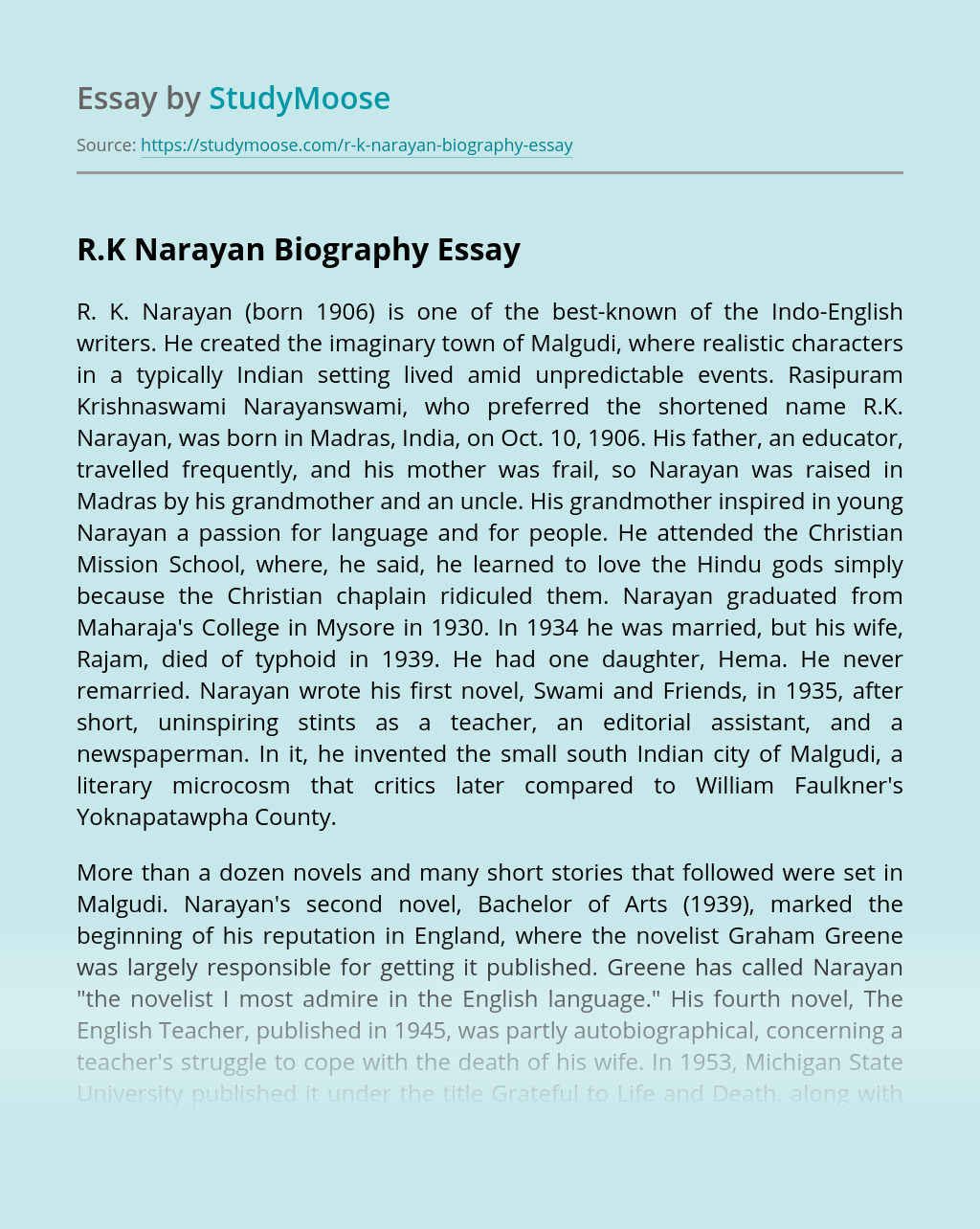 Turn in your highest-quality paper
Get a qualified writer to help you with
“ R.K Narayan Biography ”
Get high-quality paper
Helping students since 2015
Stay Safe, Stay Original