Qantas is an Australian icon. Australia’s national airline has enjoyed a long history as a profitable business, a respected brand name and has a deserved reputation for safe and reliable travel. For a small country of 23 million people, the Australian domestic airline industry is significant. The high level of urbanization of Australia’s population, the long distances between major urban centres, the lack of high speed trains and the importance of Australia’s tourism industry all spurred growth in air travel in Australia.

Don't use plagiarized sources. Get your custom essay on
“ Qutans Case Study ”
Get custom paper
NEW! smart matching with writer

Qantas has always been the dominant player in the industry.

In the years prior to 1990, Qantas operated within a duopolistic industry with Ansett Airlines. After 1990, a variety of short lived challengers entered the Australian market, but none until Virgin Blue (now Virgin Australia) survived. A few days after the September 11, 2001 terrorist attacks, Ansett also went bankrupt, leaving Qantas the dominant Australian airline largely untroubled by a much smaller Virgin Blue and a number of insignificant competitors. The years after 2001 were relatively good for Qantas.

Its dominance of local airports and landing ‘slots’ made it difficult for Virgin and new entrants to assail its dominant position.

For example, when Tiger Airways sought to fly to and from Melbourne, it was required to use a converted shed at Tullamarine Airport as its base. Qantas’ profits between 2001 and 2008 were good. Unlike most of the world’s airlines, Qantas made substantial profits in the years after the 2001 attacks. This was largely because of its dominance of the lucrative Australian domestic market, and most especially its effectively monopoly on domestic business class travel within Australia.

In recent years, however, the company has encountered turbulent times.

Like all airlines, the global financial crisis of 2008 severely dented demand for Qantas travel, especially leisure travel. The stubbornly high value of the Australian dollar also made Australia a relatively less place to travel for international tourists and students. The airline industry in Australia has become significantly more competitive. After the collapse of Ansett, Virgin Blue had around 10% of the Australian domestic market, while in 2013 in exceeded 30%. Importantly, Virgin has introduced its own business class services domestically while also reducing their fares in this segment.

The international airline industry has seen the fall of a number of well-known airlines and the rise of a number of new carriers. The vision of the Qantas group is to be one of Australia’s great businesses and among the world’s great airline groups. However, in the 2012/13 environment, Qantas faced a number of setbacks to this vision. In 2013 Qantas is struggling on two fronts. The first front was the declining profitability of international operations. This problem culminated with Qantas reporting a $257 million dollar loss for the year ending on 30th June, 2012.

This was the first loss for the airline since it was fully privatized in 1995. Internationally, Qantas faced tough challenges. New entrants on the Pacific route to the US and the ‘Kangaroo Route’ to Europe constrained fares. The entrance of highly subisidised middle-Eastern carriers like Emirates, Ethihad and Gulf Air also placed pressure on the profit margins on European routes. The emergence of low cost carriers in Asia (like, for example, Air Asia) also brought new capacity to Australia and lowered the market price of economy flights to cities like Singapore and Kuala Lumpur.

The airline is, however, profitable in the domestic market, maintaining a 65% market share and keeping its commanding lead over Virgin Australian in the highly profitable domestic business class market. The most profitable activity for Qantas is flying business class passengers. Flying economy between Sydney and Melbourne, for example, can often be less than $100 return. A business class, return flight on this route costs more than $1300 on Qantas.

Domestic business class travel thus has very high profit margins, and these premium travelers generally don’t pay for their tickets (this being a perk of senior managerial jobs in many organisations). Qantas has been keen to develop loyalty among this group, investing extensively in lounges and loyalty programs to keep this key customer group content. In an ominous way, John Borghetti (the Virgin Australia CEO, and former Qantas executive) signaled a strong intention to pursue Qantas’ customers in this key segment in 2012 and launched a full-service, business class offering at a 25% discount to Qantas on key routes.

Qantas explained the 2011/12 loss in the context of record high fuel costs of $4. 3 billion for the 2011/12 financial year. The airline’s fuel bill was $645 million greater than the previous financial year. In the annual report, the airline also announced a one-off cost of $398 million for a turnaround plan for the airline’s international network. The high Australian dollar and global economic uncertainty also played a role in the airlines woes. Qantas had been a key purchaser of new aircraft from the major manufacturers, Boeing and Airbus, being one of the first customers for Airbus’ A380 and Boeing’s 787 Dreamliner.

As one of the few profitable airlines post September 11, 2001, Qantas was able to build its fleet while negotiating strong discounts on new planes. These purchases had improved Qantas’ fleet efficiency and image in the marketplace, but had also driven an escalation in the company’s fixed costs. The second front where Qantas was struggling was continuing industrial action that culminated in the airline locking out some employees and then grounding the entire Qantas fleet on 29 October 2011. Qantas has traditionally been highly unionized – especially in comparison to its new competitors like Virgin Australia and Tiger Airways.

Qantas locked out engineers, pilots and baggage handlers from their place of employment. Aircraft were immediately grounded when the lockout announcement was made, and passengers who on board aircraft were ordered to disembark. Some aircraft turned around while they were taxiing for take-off, however aircraft in the air continued on to their destination and were then grounded. This specific industrial action stemmed from difficulties with negotiations commencing in 2010 on a new enterprise bargaining agreement, however the relationship between Qantas and its unions had been troubled for many years.

The aircraft grounding ended on the 31st of October when Fair Work Australia ordered the cessation of all industrial action taken by Qantas and the relevant trade unions. A number of issues prompted the industrial action, including the airline’s plans to establish Jetstar Japan, a low-cost subsidiary based in Tokyo. The airline also announced plans to establish Jetstar Hong Kong in partnership with China Eastern Airlines. When announcing Jetstar Japan, the airline also announced the loss of 1000 positions, and so the strategic moves were linked to job losses in Australia.

This announcement influenced employees in deciding to take the industrial action that led to the employee lockout. The airline justified its move to establish new bases in Asia as part of its strategy to become more competitive internationally. The strategic moves followed earlier, successful initiatives in establishing Jetstar Asia based in Singapore and Jetstar Pacific Airlines based in Vietnam. In 2012, Qantas has a minority shareholding in both of these airlines. The damage to the Qantas brand by the airline lockout and subsequent grounding of the fleet is difficult to ully quantify. Understandably, there was widespread anger amongst passengers, despite the airline offering refunds and reimbursement for additional passenger accommodation costs. In their annual report for 2011/ 2012, Qantas states that the grounding and industrial action cost the airline $194 million. The impact on staff morale is difficult to quantify. During the period 2011/12 in the industry environment, Qantas faced challenging competition from foreign government backed airlines and the rise of successful middle eastern airlines such as Emirates.

The airline industry can also be characterized as a battle of rival world hubs, with Singapore, Hong Kong and other countries vying for supremacy in the East Asian region. The hub battle, however, is one that Australia cannot win on home soil as it is ‘at the end of the line’ in terms of airline route geography. In recent years the industry has also been characterized by the rise of the low cost carriers such as Air Asia and RyanAir. The Australian domestic market, however, has been relatively positive for the airline, with Australia’s economic strength and the growth of the resources sector in the country providing a solid revenue base.

The airline is also positioned in the high growth region of Asia, and the related opportunities for the company in this region are numerous. In countering these environmental challenges, Qantas has successfully developed a multi-brand model of operations. The model operates with the Qantas premium brand is the flagship, QantasLink for regional operations, Qantas freight (for freight) and Jetstar as the low cost carrier. In addition, Qantas has a relatively effective frequent flyer program and a relatively dominant domestic market position with corporate clients and business travelers.

The company’s codeshare arrangement with airlines in the Oneworld alliance has helped it to overcome the limitations of Australia’s geographical position. On the 6th of September 2012, Qantas announced a new major deal linking its international operations with Emirates and moving away from their previous arrangements with British Airways. This 10-year deal provides Qantas with better access to Europe and Africa, and moves some flights away from Singapore as a stop-over hub for flights to Europe.

Dubai would be the new hub for Europe. However Qantas flights to Asia are expected to increase as the move will allow Qantas to focus on Asian airports as destinations rather than as stop-overs. Basically the deal will reduce travel times for passengers on many flights and provide more one-stop destinations for Qantas. It remains to be seen, however, if these initiatives can help to repair the apparent damage to the Qantas brand following the fleet grounding in 2011.

In theory, the potential operational efficiencies from the deal should help Qantas to return its international operations towards profitability; however the move comes at a time when there is a degree of political instability in many of the countries near to Dubai. Whatever the outcome, the flying kangaroo of Qantas is likely to continue to retain its dominant position in the Australian aviation market, regardless of the performance of the international division. 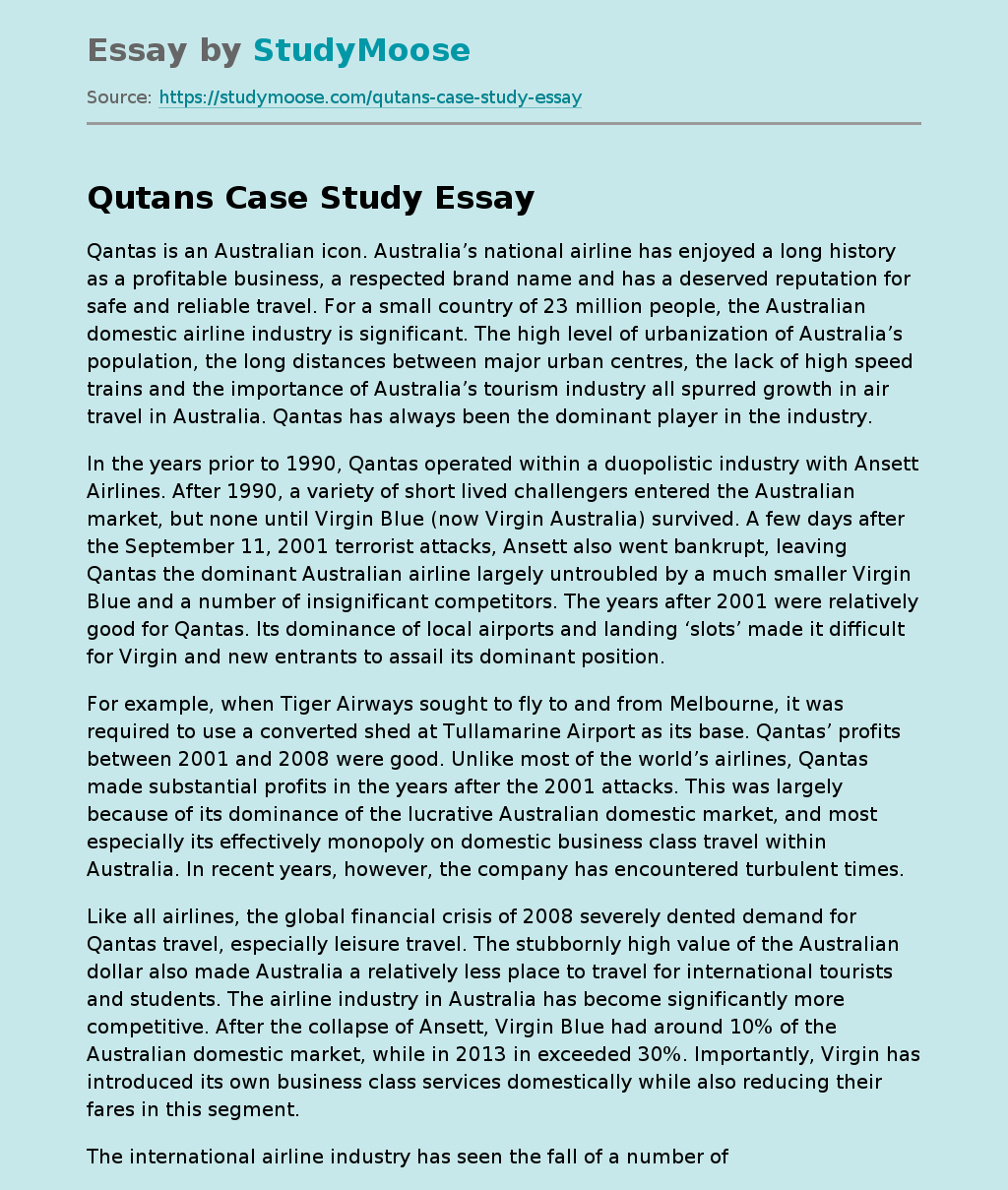