Quotes from The Scarlet Letter

“But she named the infant ‘Pearl,’ as being of great price- purchased with all she had- her mother’s only pleasure.” Ah, but let her cover the mark as she will, the pang of it will be always in her heart. ~Nathaniel Hawthorne, The Scarlet Letter, Chapter II “The Market-Place” “the scarlet letter had the effect of the cross on a nun’s bosom. It imparted to the wearer a kind of sacredness which enabled her to walk securely amid all peril.

Don't use plagiarized sources. Get your custom essay on
“ Quotes from The Scarlet Letter ”
Get custom paper
NEW! smart matching with writer

There was a fire in her [Pearl] and throughout her; she seemed the unpremeditated offshoot of a passionate moment.” Chapter 7 “Trusting no man as his friend, he could not recognize his enemy when the latter actually appeared.” Chapter 10 “Come away, mother! Come away, or yonder old Black Man will catch you! He hath got hold of the minister already. Come away, mother, or he will catch you! But he cannot catch little Pearl!” Chapter 10 “Come up hither, Hester, thou and little Pearl….

Ye have both been here before, but I was not with you.

Come up hither once again, and we will stand all three together!” Chapter 12 “[M]any people refused to interpret the scarlet A by its original signification. They said that it meant Able; so strong was Hester Prynne, with a woman’s strength.” Chapter 13 “The glow, which they had just before beheld burning on his cheek, was extinguished, like a flame that sinks down hopelessly among the late-decaying embers. It seemed hardly the face of a man alive, with such a deathlike hue; it was hardly a man with life in him that tottered on his path so nervelessly, yet tottered, and did not fall!” Chapter 23

Quotes from The Scarlet Letter. (2016, Apr 16). Retrieved from https://studymoose.com/quotes-from-the-scarlet-letter-essay 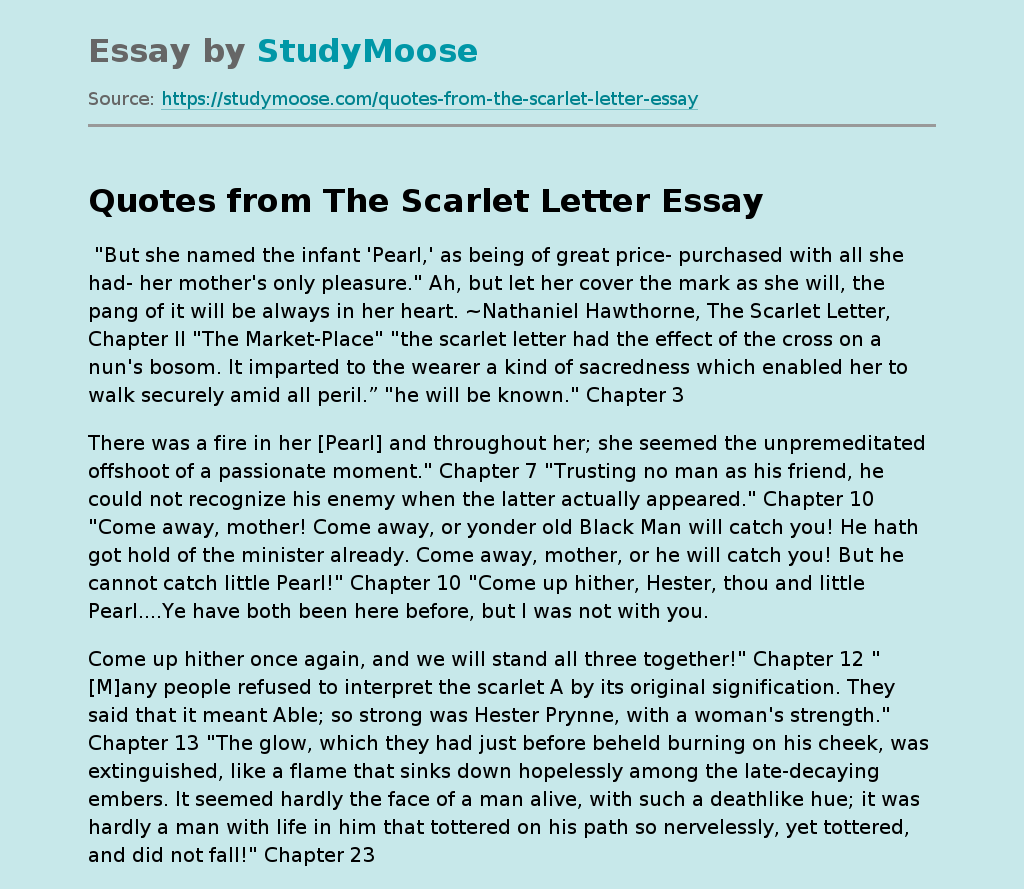