Turn in your highest-quality paper
Get a qualified writer to help you with
“ Questions concerning criminal law ”
Get high-quality paper
NEW! AI matching with writer

2 (2004), pp. 173-205). Criminal law intimidates citizens because most people won’t want to be arrested or have a write up on their personal record. Criminal law controls behaviour but only outlines what a good citizen should be doing, by creating laws. “More precisely, the term refers to substantive criminal law – a body of law that prohibits certain kinds of conduct and imposes sanctions for unlawful behaviour.”

thecanadianencyclopedia.com/articles/criminal-law, para. 1.) Having laws and not enforcing them is pointless, so by creating a law you need to enforce it strictly so people stop committing the offence. Like in Alberta and other parts of Canada the Distracted Driving law was in full effect and anyone caught texting and driving or anything along those lines was given a major demerit dock, and a hefty ticket you need to pay.

By doing this it enforces the law and creates that thought in the back of the citizens head that says “should I do that? What will happen if I text and drive and get caught?”.

However, most criminals don’t have that subconscious thought and don’t care if they get caught breaking the law, that’s why so many criminals are re-offenders. Laws are either questions concerning criminal justice and safety

There should be a universal drinking age of 16, and the driving age should be raised. Allowing teenagers and young adults to drive before they learn the effects of drinking is not a good policy. Too many citizens think because they have been driving for 2 – 4 years think that they can drive drunk which is not the case and creates a big problem. Among 18 – 24 year olds, they have the highest percentage in Canada for driving under the influence per 100,000 licensed patrons.

Universally, if you lowered the drinking age and heightened the driving age to 21, hopefully less people would be drinking and driving because more people would have experienced the effect of alcohol before driving. If this actually worked then maybe less and less police officers would need to worry about check stops and be less restrictive on certain laws and would be able to focus on other important things around Canada.

questions concerning criminal justice and safety ii. Assuming that males are more violent than females; does that mean that crime has a biological rather than a social basis (because males & females share a similar environment)? Statistically males made up for more then five times the amount of crime then females did in 2005. (Women and The Criminal Justice System, http://www.statcan.gc.ca/pub/89-503-x/2010001/article/11416-eng.htm.)

Males aren’t biologically programmed to be more physically aggressive and commit more crimes, but when people say males commit more crimes because of testosterone, that is crazy because women have testosterone in their body’s too. Males commit more crimes because most males want to assert their “macho – ness” to females and prove that they are manly. When males are 20-25 years old, the highest category for committing a crime, they have no other ways to show females how manly they are other then fighting and committing crimes.

I think the reason why older males don’t commit more crimes compared to the younger generation is because older folk have other ways to show their manliness like their job, how much money they have, or the kind of car that they drive. That being said crime has nothing to do with biology, but it comes down to men trying to show how powerful they are in an attempt to “woo” a female.

Concerning the fact that males and females sharing the same environment but males being “more violent”, I think the reason is because males aren’t as protected as females are. During high school kids always hear about fathers or brothers who will protect their child or sibling from anyone that hurts them in any way. You never hear a sister or a mother saying that about their

questions concerning criminal justice and safety
son. (Introduction to Criminology, Lecture 3, September 23, 2013, Professor Jan Stanners.) So another factor about females being less aggressive is the fact that they are protected more and almost restricted from certain things because more people worry about girls then boys. Studies are also showing that women’s crime rates are increasing quite noticeably while males are slowly dropping. I think this is because since the 1950-80’s women’s roles were typically stay at home moms taking care of the children, etc. But now women have a lot more freedoms and have jobs and can they can now do whatever they please just like males, so I think that’s why female crime rates are rising steadily.

Also, according to the statscan government website it shows that females have a higher victimization rate between the ages of 18-44, which we expect because men are “more violent”. However after that age range the males become the more victimized group which I found very interesting because that in itself refutes any debate of men being more violent because of testosterone, because no matter how old you are your body is still producing testosterone.

questions concerning criminal justice and safety
iii. Do you agree with the assessment that for young people, a school is one of the most dangerous locations in a community? Did you find your high school to be a dangerous environment? “According to the Bureau of Justice Statistics, 17 teens were killed at schools and five children killed themselves in the year ending June 30, 2002.” (School Safety, http://www.ncpc.org/topics/school-safety.) School can be a very dangerous place for teenagers depending on the area of town that they live in. In Calgary high schools are more safe down south then in Forrest Lawn just because of the type of families and people there are around influencing the teenagers.

The type of influence a teenager gets can lead them on the path to becoming a bully. At the Columbine shootings two teenagers shot and killed many innocent teenagers, in Michael Moores documentary it is shown that the two students were bullied occasionally which may have caused them to act out and shoot their peers. (Michael Moore, Bowling For Columbine, 2002.) As far as schools being one of the most dangerous areas in the community I find that hard to believe. Around schools you have teachers and counsellors supervising you and helping you throughout your 3 years so it can’t be as dangerous as people make it out to be.

However the activities that take place outside of school I think are the most violent ones. They involve students and peers that you’ve met through high school and I believe people are getting those two things mixed up, but that’s just from personal experience because inside of my high school was relatively safe. We had a lockdown where a student from another school came into ours with a knife looking for a student in one of the classes but the police came and handled the situation accordingly and our teachers were well prepared questions concerning criminal justice and safety

and practiced lockdowns on a regular basis. Later we all found out this situation happened because of activity outside of school. My personal experiences in high school I never had a physical altercation with anyone but in grades 10 and 11 a lot of students would make organized fights after school and a big crowd would join. I think this relates to the previous question on men being more violent, because teenagers have no other way to assert their manliness to friends and girls other then to fight and beat someone up. I think the most dangerous places in our rural communities is back alleys at night time walking home from drinking at a friends or at a bar.

You make yourself an easy target being drunk and that’s when criminals take the chance to mug you. By being at school it’s really hard to make yourself a big target with teaching staff all around you. To sum everything up I do not agree that schools are the most dangerous place for young people. In some instanced even your own home could be the most dangerous place to be and school could be like an escape for some students. 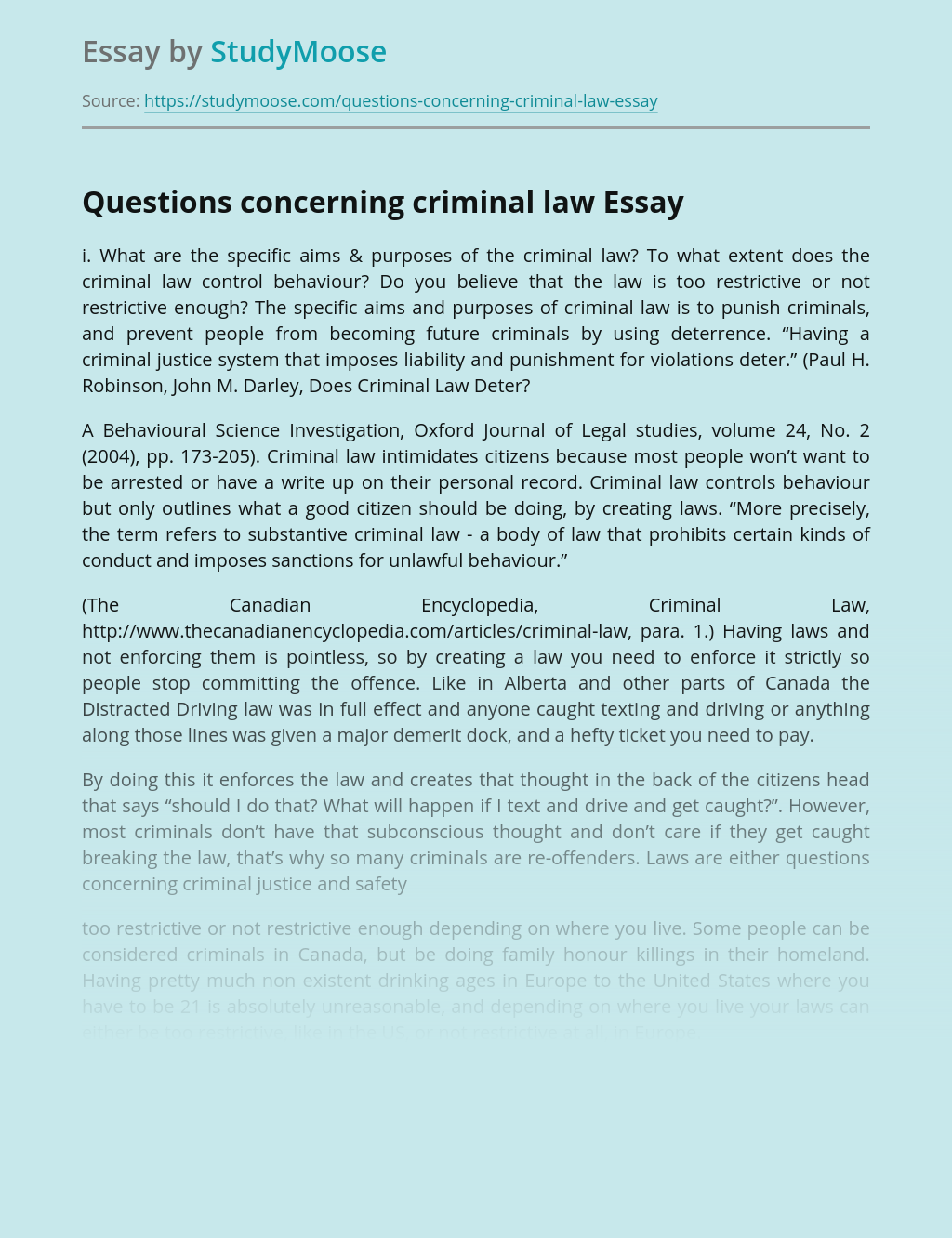 Turn in your highest-quality paper
Get a qualified writer to help you with
“ Questions concerning criminal law ”
Get high-quality paper
Helping students since 2015
Stay Safe, Stay Original