“The right to life and dignity are the most important of all human rights and this must be demonstrated by the state in everything that it does, including the way it punishes criminals.” – Justice Arthur Chaskalson. The death penalty is considered, “the legal” punishment for a criminal. Although the death penalty has been used for many years, the thought of it continues to bring shivers down the back of most of society. Even though there has been an abundant of debates whether it should be abolished or not, citizens do not really know the facts behind it.

Don't use plagiarized sources. Get your custom essay on
“ Question of Death Penalty ”
Get custom paper
NEW! smart matching with writer

Most of the society assumes that the death penalty is less expensive than life in jail without parole. United States citizens believe that this punishment will eliminate any revenge thoughts and therefore increase public safety. Being a factor of death, it should not be taken as lightly as it has been. Although sentencing the death penalty may seem the proportional punishment to a brutal crime, it is not a good alternative, because the cost of execution hurts our economy, it lacks closure for victims, and it violates the U.

S. Constitution. Most of society assumes that the death penalty is less expensive than to keep a criminal in jail for life. Little did they know that it actually costs the U.S. less for a criminal to live in prison than to be executed. According to Dellapiana author of “Should We Put the Death Penalty on the Chopping Block?” not only is there cost for pre-trials, trials and courts but there is “additional costs amounting to .

It is high priced because “the consequences or error and procedural unfairness are magnified when life is in the balance; thus, courts have imposed astringent due process protections.” (Dellapiana 1) Being in really tough economic times, wasting all that money on the death penalty seems inappropriate. All that money wasted on murdering someone, could might as well be used somewhere else in a productive manner. Dieter believes and states “the death penalty in the U.S. is an enormously expensive and wasteful program with no clear benefits. All of the studies on the cost of capital punishment conclude it is much more expensive than asystem with life sentences as the maximum penalty.” (Dieter 2). The money accumulated to be used in the death penalty is desperately needed in other important programs. For example, “In Florida, the courts have lost 10% of their funding, with another cut expected, as home foreclosures accelerated. Philadelphia is leaving 200 police positions unfilled. In New Hampshire, civil and criminal jury trials were halted for a month to save money; in one county, 77 criminal trials were delayed for up to six months.” (Dieter 12).

Clearly showing the United States is greatly affected by the death penalty. By the absence of the money needed for jobs, it has been forced to cut jobs strongly needed to protect society. As it can be seen, all the money spent on the death penalty is crucially affecting the economy. The process of following through the death penalty is lengthy; an entire appeal process can take more than 15 years before executions take place and in some cases it never goes through. “Sentences or convictions can be reversed, defendants may die of natural causes or suicide, governors occasionally grant clemency, and entire statutes can be overturned by the courts.” (Dieter 28). Meaning, most of the sentences don’t result in an execution, which only consumed an exaggerated amount of money when the process is over. Not only is the appeal high priced, pre-trials and trials only add much more money to the high amount already accumulated. Instead of finding a more appropriate approach, society spends millions of dollars into a system that doesn’t produce results. Although many citizens do believe the death penalty is effective, they also believe the price is worth it. “This is because life is invaluable; there is no amount of money or prison that could equal it” (Roberts –Cady 3).

Taking away their freedom is a way of restraining their moral behavior in society. “Because the wrongdoers had unfairly gained an extra measure of freedom from moral restraint, the natural way to restore a fair balance is to reduce the protection he ordinarily would have gained through moral restraints on the conduct of others. By treating the wrongdoer in what is ordinarily a forbidden way, we strip away part of the protection that moral restraints on behavior would ordinarily have afforded him. Thus, we remove precisely the sort of advantages he has gained.” (Roberts- Cady 3). A punishment is supposed to make the criminal reflect on their wrongdoing and get them on the right path. But why give the criminal the easy way out. Although many citizens believe in the saying “an eye for an eye…” the death penalty does not necessarily bring closure to the victims’ family. “Because of the extensive constitutional due process requirements in death penalty litigation, trials are lengthy, and appeals can go on for decades, for families of victims, there is no closure.”(Dellapiana 5). Life sentencing with no parole is a much faster process and ensures closure to the victims’ family.

For most of the victims’ families, the death penalty is a “punishment that is justified because it is a reward [or an easy way out] for wrongdoing” (Roberts – Cady 2). Not only does it lack closure to the victims’ families but it isn’t morally acceptable. This is because “if life has unconditional, incomparable worth, then we cannot and should not compare the worth of one person’s life with that of another” (Roberts-Cady 4).Taking the life of the murderer will not be the same as taking the life of the victim. For example, taking the murder’s life by injection can’t be brutally equivalent to taking the life of the victim. Some citizens believe the death penalty as punishment does provide closure. Many families consider this as closure because the murder has been killed. But as Roberts –Cady states “Taking the murders life cannot be said to be even roughly equivalent to taking the life of the victim.” (Roberts- Cady 4) If it is not equivalent why not let them suffer in prison. Although life is the biggest blessing one could ever have, many criminals prefer death rather than to get life sentenced. So why give them what they prefer? And, who are the judges to decide who deserves to live and who deserves to die? Although many citizens believe the death penalty is a logical punishment, it violates the United States Constitution. The death penalty goes against the Eight Amendment in which it states it “prohibits the use of cruel and unusual or excessive punishment.”

Thus, this amendment protects the criminal from receiving a punishment that can be considered comparable to the pain caused to the victim. The death penalty easily violates this amendment because it is cruel and unusual punishment since the result is death. Not only does it violate the United States Constitution it also violates the Declaration of Independence which says “All men are created equal”. It also violates this because of the discrimination by the judges and courts. An example is in case DeLuna v. The State of Texas (1986). In this prejudiced case, Carlos DeLuna was an American Hispanic who was put to death even though he was innocent. DeLuna was convicted of murdering a convenience store clerk, Lopez. Although all assumptions pointed towards DeLuna, he was innocent. DeLuna repeatedly stated his innocence and stated the real killer was Carlos Hernandez. The judge discriminated him for being Hispanic, neglected to listen to his statements, nonetheless he claimed “calling Hernandez a “phantom” and “figment of DeLuna’s imagination.” After being wrongfully executed, a professor and five of his students opened the case causing questions to rise and evidence to be found. The re-opening of this case showed tampering evidence. Hernandez already had a criminal record for being a repeatedly violent offender and known for slashing women. As the case was ongoing, police tampered the evidence.

For example, as the investigation was occurring “the police said they couldn’t find a “Carlos Hernandez” [with a criminal record] despite his long rap sheet.” There was also a bloody foot print outside the store which was never processed. The judge was influenced by his ethnicity and appearance. He looked like the criminal, therefore for the judge, he was the criminal. Nor the judge or the court gave DeLuna the opportunity to prove himself innocent. Many people don’t categorize the death penalty as cruel and usual punishment; therefore, it does not violate the Eight Amendment. According to the dictionary, cruelty means causing somebody to feel pain or suffer. The Eight Amendment does not specify if emotion is part of this law. Death penalty should not be used to punish our society. It has been clearly explained how the death penalty is ineffective. A serious impact will continue to be seen throughout the United States economy if the death penalty is not abolished. It would take years for victims’ families to find the peace needed for closure. Death penalty does not only violate the U.S., but it violates The Declaration of Independence as well. As stated, it is proven the death penalty is not a good punishment but an easy way out therefore “Our country will never gain peace if we are killing our own citizens.” 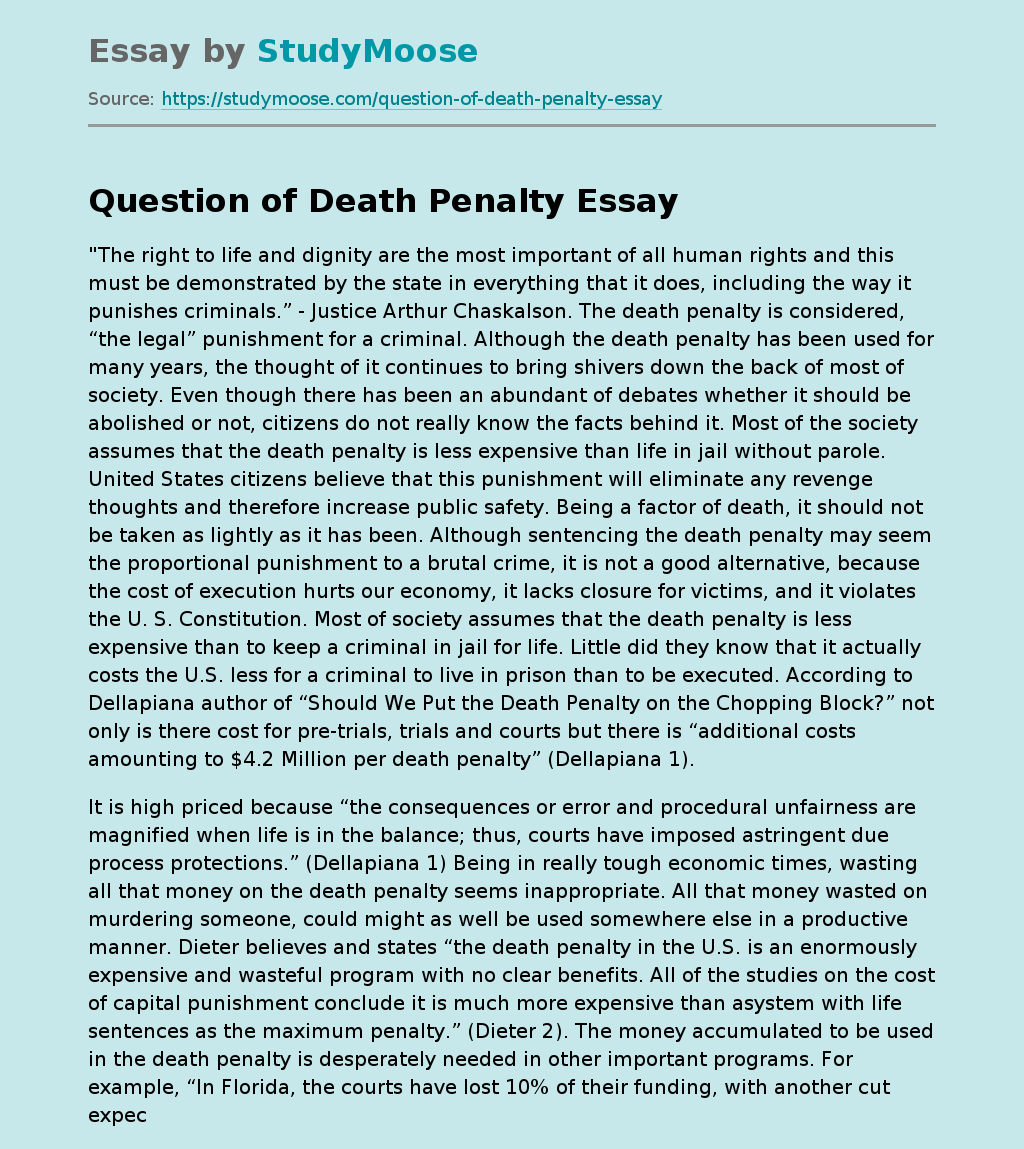