I conducted a survey on the usage of cellphones as it is the gadget used by each and every person of the prevailing scenario. People use cellphones for numerous purposes in their daily life. These help people at faraway places to stay in contact with each other (Uses of mobile phone,2016). Nowadays, cellphones have a lot of features such as camera, clock, calendar, alarm, calculator, music, contact list, games etc. which help people to entertain themselves when they are alone. Since it provides a plethora of features to people, so every person prefers having his own cellphone.

Don't use plagiarized sources. Get your custom essay on
“ Qualitative Research Methods For Social Science ”
Get custom paper
NEW! smart matching with writer

However, along with the benefits, cellphones are having various bad effects on people. I asked five different questions from my friends through this survey to know about their ideas.

For this question, I will say that people are much dependent on their cellphones usually the people who have internet services on their phones as they spend most of their time on social media sites.

For this question, I will also say that the merits of cellphones overweigh their demerits as cellphones help people to do different tasks for which a number of gadgets were required in the earlier times (Tomasovic,2014).

The third question asked about ratings for should the school students have their personal cellphones. A maximum number of participants (63.64%) rated it 3/5 while rest 9.09% graded 1/5,2/5,4/5 and 5/5. However, I will rank it 1/5. According to me, school student must be allowed to get their personal cellphones only if they need to search something about their studies. If parents will provide their children their own cellphones just for their entertainment, they will get distracted from their studies and will avoid playing outdoor games which may prove to be harmful for their health as they may suffer with obesity (Hess, 2019).

The fourth question was about the age group which is most dependent on cellphones. 81.82% of the participants answered teenagers whereas only 9.09% of them answered children and adults. According to my opinion also teenagers depend more than everyone on cellphones. It has been found that the majority of the smartphones (98%) are owned by millennials (Nielson company,2016).

The last question was about the effect of cellphones on the relations. Almost every person answered that cellphones have a negative effect on relationships. I also feel the same as people spend most of their time on their cellphones instead to talking with their family members or friends. This widens the gap usually between children and their parents are they are not able to understand each other due to lack of communication and over-dependence on cell phones.

Overall, it can be concluded that the benefits of cellphones are more than its drawbacks if they will be used in positive manner. People must not depend too much on their cellphones instead they must spend most of their time talking with their family members and friends. 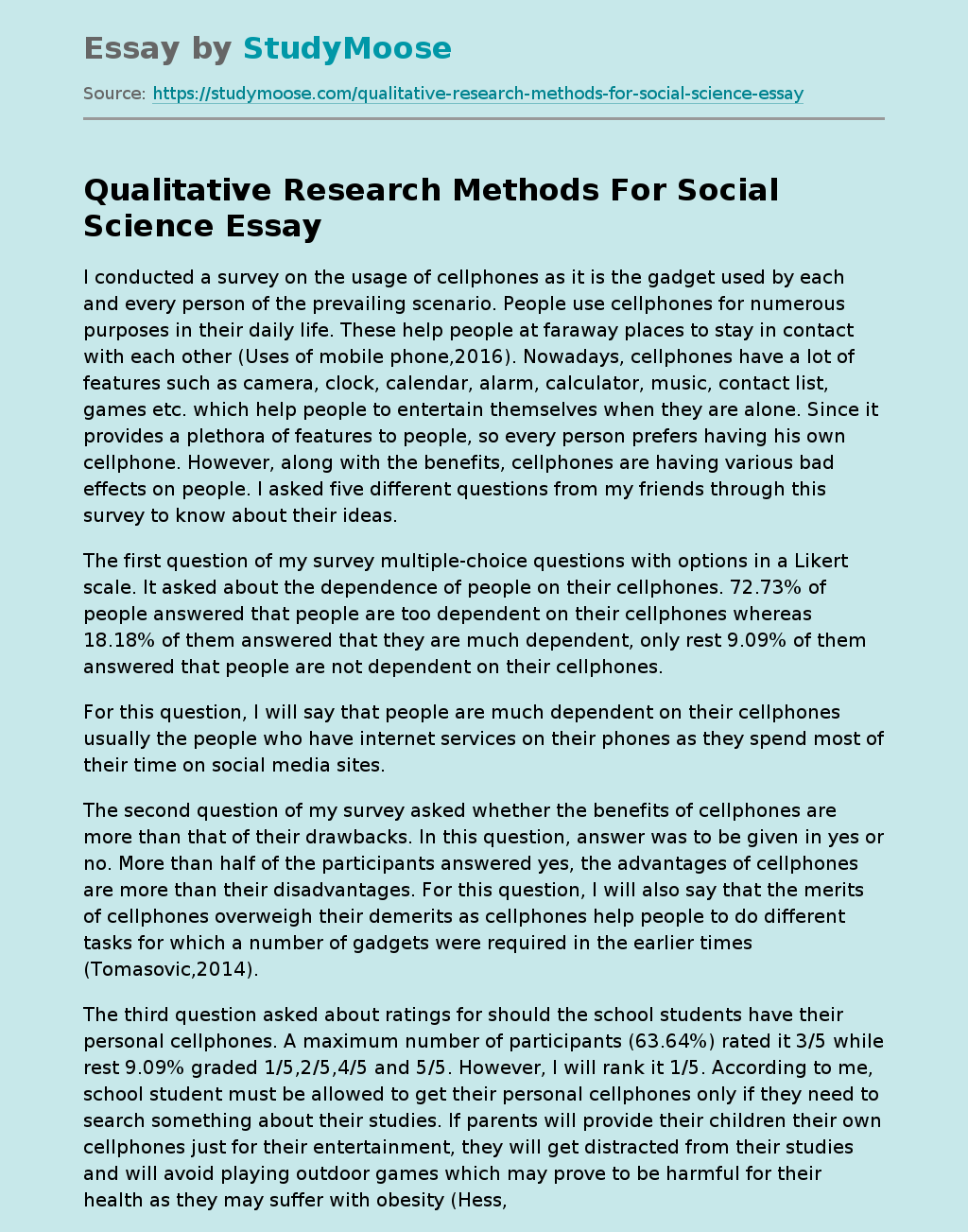