The book The Alchemist was originally written in Portuguese by Paulo Coelho in 1987. To date, it sold 35 million copies and is reigned as the most translated book in the world by a living author. The Alchemist was the second book of the now 67-year old Coelho following his first novel attempt entitled The Pilgrimage. It was Coelho’s second book that made him known worldwide, but amazingly, it just took him a course of one two-week spurt of creativity to complete the novel The Alchemist.

Turn in your highest-quality paper
Get a qualified writer to help you with
“ Purpose Of Human Life in Coelho’s Alchemist ”
Get high-quality paper
NEW! AI matching with writers

The novel was about one Andalusian shepherd boy’s mystical trek towards realizing his recurring dream of finding his treasure located at the Egyptian Pyramids. Eventually, as he go on through his journey, he learns to speak the “Language of the World” and discovering the essence of alchemy. He meets different people along his way, starting with the fortune-teller whom he asks to interpret his recurring dream that night while sleeping near a sycamore tree in the sacristy of an abandoned church.

The lady says he should pursue finding his treasure and when he does find it, he must give her a part of it as payment for her service. The second person he meets is a mysterious old man who seems to be able to read his mind. This man introduces himself as Melchizedek, or the King of Salem.

He tells the boy about good and bad omens and says that it is the shepherd’s duty to pursue his Personal Legend. Melchizedek then gives him two stones, Urim and Thummim, for him to use when he needs help to interpret omens.

The boy decides to follow what the man has said to him and sells his herd to purchase a ticket to Tangier, in northern Africa. But shortly after he arrives there, a thief steals all of his money, so he decides to look for a way to make enough money to return home. He finds work in the shop of a crystal merchant, where after a year he makes improvements that is gratified by financial rewards. He then leaves to proceed in the pursuit of his treasure. He joins a caravan traveling to Egypt. There, he meets an Englishman who wants to learn the secret of alchemy, or turning any metal into gold, from a famous alchemist who lives at an oasis on the way to the pyramids. While traveling, the boy begins listening to the desert and discovering the Soul of the World.

The caravan reaches the oasis after some time, and there he falls in love to an Arab girl named Fatima. The caravan leader tells them that tribal warfare prevents them from continuing their journey so they are staying at the oasis a little longer. One day, the boy wanders from the oasis into the desert and sees two hawks fighting in the sky with a vision of an army entering the oasis. Because attacking an oasis is a violation of the rules of the desert, he shares his vision with the oasis’s tribal chieftain. Soon afterward, he is confronted by a black-garbed, veiled stranger with a sword, who sits atop a white horse. It is the alchemist. The tribal chieftain arms his men, and they are well-prepared when the oasis is indeed invaded. The alchemist offers to cross the desert with the boy.

Soon the two men enter into an area of intense tribal warfare. Warriors hold the two men captive, but eventually allow them to continue their journey after the boy manages to demonstrate to them that he can be one with the wind. The alchemist tells the boy that he needs to return to the oasis, and that the rest of the trip is his to make alone so that he can claim his Personal Legend. The alchemist shows him how the Elixir of Life and the Philosophers’ Stone are made and he gave him the quarter of the gold before leaving the boy on his own. The boy arrives at the Egyptian pyramids and begins to dig. He finds nothing buried in the ground.

Thieves come and see him, they beat him and rob him of his gold. After he tells them of his dream, though, one of the thieves recounts his own dream about a buried treasure in the sacristy of an abandoned church. He then realizes where his treasure can be found. Returning to Andalusia, he goes back to the church where he dreamed of the treasure near the pyramids. He digs where he slept, beneath a sycamore tree, and there it is, his treasure. He plans to return with it to Al-Fayoum, where he will reunite with Fatima, who awaits him.

This story, for me, is really one of a kind. It’s not every time that I get to read novels like this which is simply a work of a truly passionate and creative mind. According to The Alchemist, Personal Legends serve as the only means by which an individual can live a satisfying life. In fact, the universe can only achieve perfection if all natural things continuously undergo a cycle of achieving their Personal Legend, evolving into a higher being with a new Personal Legend, and then pursuing that new goal. This concept, that the individualistic pursuit of a Personal Legend exists as life’s dominant—perhaps only—spiritual demand, lies at the center of the unique theology of The Alchemist. I love how the alchemy was introduced and explored in the story. I know little about the science of turning metals into gold – though I have been hearing it – but this book is just so well-written that after I finished reading it, I have a certain feeling of understanding what it really is and what it is really meant for.

The story also emphasizes that it is not the destination but the journey that shapes us. In the book, the boy’s destiny wanted him to learn many things beyond being a simple shepherd, so he was sent to a journey that he never thought he would ever experience in pursuit of a treasure in his dream, only to find out in the end that it was just located in the place where his dream occurred. Even with this, he did not regret that he went through that far because he knew that what he found along the way was the most precious treasure a man could ever have. Moreover, in The Alchemist, the spiritual unity represented by the Soul of the World binds together all of nature, from human beings to desert sand. This idea underlies the parallel we see in the novel between the alchemist purifying metal into gold and the shepherd boy purifying himself into someone capable of achieving his Personal Legend. According to the novel, the Soul of the World has created an ultimate desire, or Personal Legend, for everything, whether a man or a piece of iron.

To accomplish its Personal Legend, each thing must learn to tap into the Soul of the World, which purifies it. That continual purification ultimately leads to perfection. This notion of humans, metals, and all other things sharing the same goal demonstrates that all elements in nature are essentially different forms of a single spirit. Recalling from the book, there also is the mentioning about the Language of the World, and that every heart knows and understands it if we will just learn how to listen to what it has to say, like how the boy learned to communicate to the nature through his heart. Another relevant thing in this novel is the presence of omens everywhere and at any given time. It was said there that we just have to learn how to read them, and that they are there to guide us towards achieving our destined Personal Legends.

But just like what is implied in the story, fear prevents people from realizing their destinies, so we tend to ignore the omens, and their call to be recognized are eventually becoming more and more silent. I also noticed the involvement of religions (Islam and Catholic). I have always thought that talking about religious beliefs and practices is as complicated as discussing the theories of origin of the universe. But in this case, I am relieved that none of the sectors is being favored nor left behind. Not that there is a competition of which is right and which is wrong, but if I would be asked, I’d rather not to answer. Lastly, and probably what really stole a good bit of me is the foreign phrase maktub that was mentioned how many times in the book. It means “it is written”, which pertains to the destiny we each has that’s written by a Superior Hand for us to fulfil. I always thought that everything that happens serves a purpose. 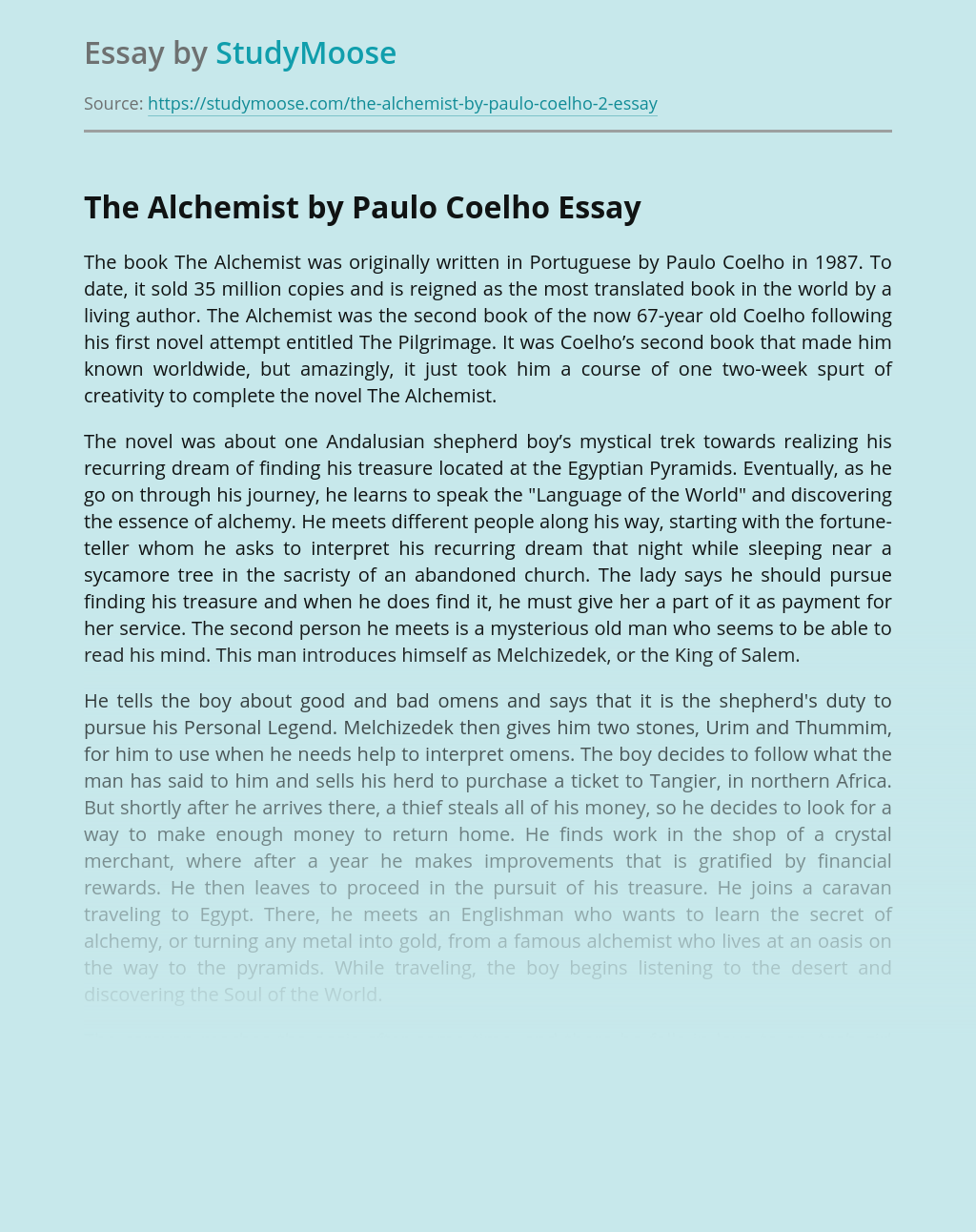 Turn in your highest-quality paper
Get a qualified writer to help you with
“ Purpose Of Human Life in Coelho’s Alchemist ”
Get high-quality paper
Helping students since 2015
Stay Safe, Stay Original