History Of The Puritans

In the 1600’s, the Puritans migrated to the Americas using their more Christian and traditional values to influence the economical, political, and social development of the New England colonies. The Puritans traveled out of a desire to create a more “pure” and more Christian society, not of primarily economic interests. The Puritan’s idea of what God’s indication of a perfect humanity made a lasting impression on New England. The region’s economic success was second to religious beliefs. New England originally existed as a plantation of Religion, not a plantation of Trade.

Don't use plagiarized sources. Get your custom essay on
“ History Of The Puritans ”
Get custom paper
NEW! smart matching with writer

The Puritans believed that wealth was a sign of God’s favor, and they worked hard to make sure that they were at the “top of the hill”. They became merchants and participated in the commercial trading centers of the New World. The Puritan’s importance of being God’s favorite demonstrates the development of New England’s economy. Politically, the Puritans influenced the progress of New England by enforcing their strict moral code, morality succeeded all other concerns.

Proficient in: Freedom Of Religion

The use of morality and religion in politics led to uprisings. An example of this is Roger Williams “Plea for Religious Liberty,” questioning authority. (Doc F). Nathanial Ward argues that liberty, conscience and moral laws have to be in balance in order for the “fiddle to be in tune,” and society to succeed. (Doc G). The Puritan’s beliefs in community and education caused New England to have bigger families and a better education. Puritan’s believed in educating new members of the “elite,” to inform new followers of their belief.

Harvard University was created to teach Puritan ways. They longed for an advance in learning. (Doc E). The Puritans were a very close community. They rejoiced and mourned together. (Doc A).

This steered to the development of towns and villages. In addition, the Puritans traveled to the new world in families, not individuals. This causes the region to have a balanced men and women ratio. All in all, the Puritan’s motivation for establishing a pure Christian society influenced the economic, political, and social development of New England. Economically, they made a center of mercantilism in the favor of God. Politically, the Puritans used their moral beliefs to create a basic political structure for New England. Socially, they formed communities with a balanced male and female population.

History Of The Puritans. (2016, Apr 30). Retrieved from https://studymoose.com/puritans-dbq-essay 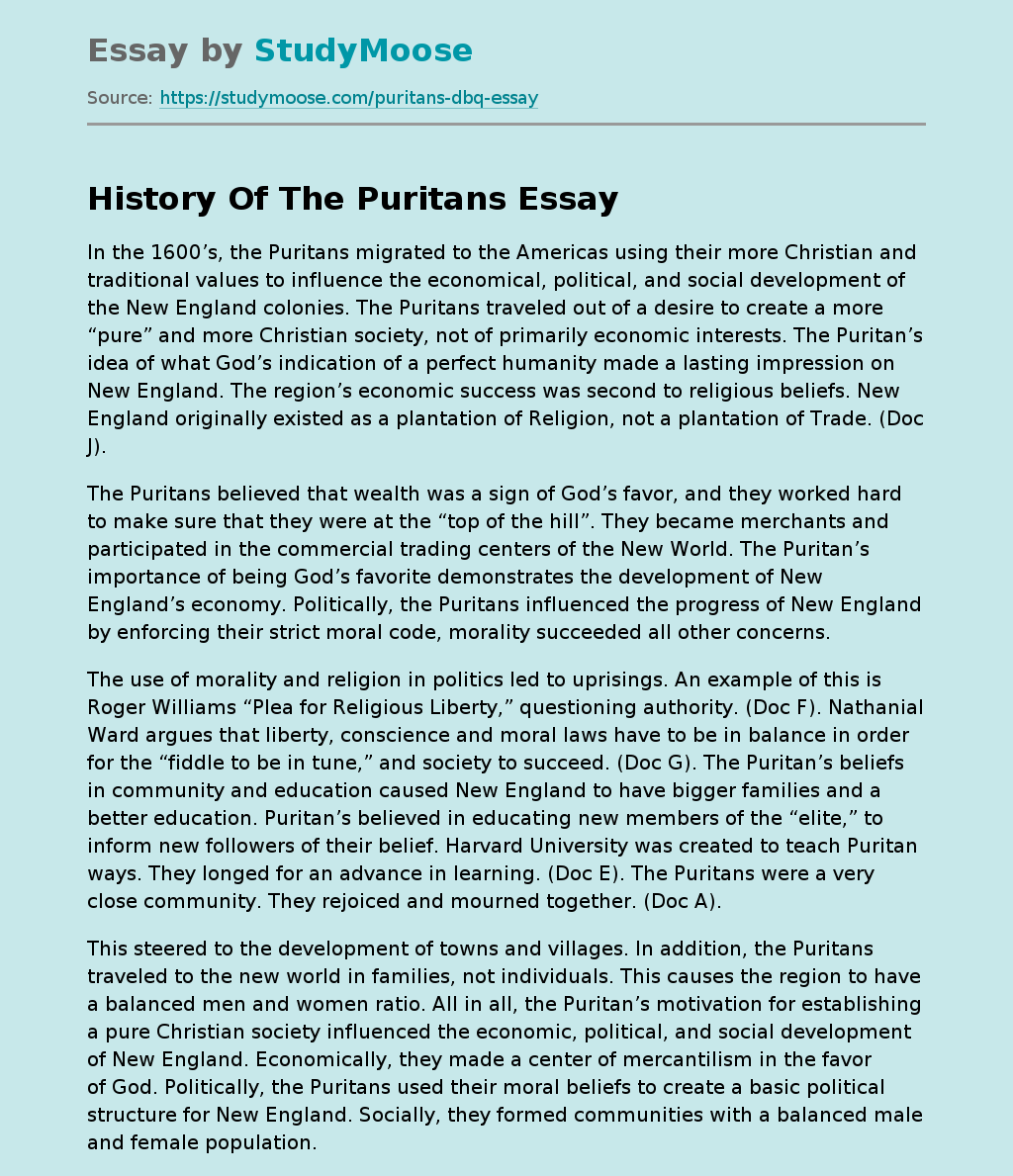