Purification and Penance in Jane Eyre, a Novel by Charlotte Bronte

Sin is an unavoidable part of life that can either be seen as a permanent stain on one’s human existence, or a forgivable offense as Charlotte Brontë does through her novel, Jane Eyre. Jane Eyre is a bildungsroman novel which follows the growth and development of Jane Eyre, a strong feminine character who narrates in the first person. The traditional virtues of hierarchy, authority, and propriety are continually challenged through the actions of Jane Eyre in critical social situations (Mizel 178).

Don't use plagiarized sources. Get your custom essay on
“ Purification and Penance in Jane Eyre, a Novel by Charlotte Bronte ”
Get custom paper
NEW! smart matching with writer

Charlotte Brontë is thought to have modeled Jane Eyre’s experiences off her own, but many refute this assertion as “her strong imagination was stimulated far in advance from her experiences of life.” (Gérin 1). The contradictory nature of Jane Eyre subliminally criticizes Victorian Era expectations of women, but only to a certain degree. Charlotte Brontë refuses to lose sight of the importance of religion throughout her novel, as her focus consistently returns to inner spiritual health; such as when Jane refuses to partake in a mission trip to India.

With the shifting focus from social rebellion to religious fulfillment, Jane Eyre encounters multiple situations where the morally right response leads her to isolation (Tressler 1). Subsequently, she endures many life-altering moments that serve as catalysts to shape her social and economic advancements. One of these catalysts is Jane’s decision to marry Mr.

Rochester, a peculiar man who has imprisoned his former wife in his attic. Jane initially refuses, the prospect unbearable for her Victorian morals, but later chooses to marry Mr. Rochester after he is left crippled in a house fire. Her return to this relationship was caused by her need for joy and human affection after she realizes her own individuality, but also after she acknowledges a figurative removal of sin (Mizel 186). In the 1847 gothic novel, Jane Eyre, Charlotte Brontë symbolically impairs one of her characters during a house fire to show the purging of his sins as she explores the theme of purification and penance.

Charlotte Brontë was part of one of the most influential literary families of the nineteenth century. Although they died prematurely, her five siblings were considered extremely gifted in their skilled writing. Brontë lived during the early nineteenth century and because of this, was subject to the harsh standards expected of women. Her novel questioned the role of women in society, essentially critiquing the current expectations (Lamonaca 245). Charlotte Brontë also deploys the languages of class to confront blatant sexism (Bossche 49) through the fluid movement between the social structure. Social classes were seen as the rigid backbone of society, and Charlotte Brontë’s migration of social location (Julia 149) demonstrated her discontent with the outdated system.

Charlotte’s remarkable fiction was grounded in her own passions and life experiences (Flanagan 13). Brontë lived in an era where unsatisfactory health and sanitation prevailed, thus resulting in thirteen hundred burials in the time period between 1840 and 1850. Tragically, the average age of death was twenty-five and forty-one percent of infants died before the age of six (King 231). As a result of omnipresent death during this time period, religion was almost obsessively referenced as a motif to counteract death. Factors such as these helped to re define the female character and even served to re-define how religion can be installed as an aid to a plot. The symbol of fire is first introduced within Jane Eyre when young Jane is blamed for an incident which she is not responsible for and she is sent to the now infamous “Red Room” as punishment.

When arriving, livid from the altercation, Jane presents the room as warm and mildly inviting: “the carpet was red; the table at the foot of the bed was covered with a crimson cloth; the walls were a soft fawn colour, with a blush of pink in it,” (Brontë 17). This initial representation of the room, hot colors and visual imagery creating an inviting atmosphere. The fire represents Jane’s vitality and after the fight: “Jane’s spirits run high” (Tressler 5).

Contrasting with the ice in the next scene, Charlotte Brontë makes excellent use of juxtaposition to highlight the difference in Jane’s level of fear while in the “Red Room.” Jane says; “This room was chill, because it seldom had a fire; it was silent, because remote from the nursery and kitchens; solemn, because it was known to be so seldom entered.” (Tressler 17). The feeling of isolation is evident, and the tone evokes a mood of distress and rising panic, affirming the belief that Jane fears isolation. Charlotte Brontë establishes intimate connections between female identity and independence in Victorian England (Lamonaca 184) and paves the way for a new heroine-based novel absent from literature before her time.

Jane Eyre was considered one of the most widely read novels from the nineteenth century (Jane Eyre 1) due to its strong writing and ability to resonate with audiences of all ages. It marked a turning point in literature: the old trope of women being calm and reserved was thrown out the window and replaced with the strong independent woman. Her extraordinarily sophisticated novels have had an unprecedented impact on literary history (King 255), changing the mold of a love story and prefacing it with a realistic character not blinded by a social disconnect. Brontë wrote the love story from a realistic perspective. The depth of her involvements and the honesty of her mind made the love story startling in the Victorian Era and still profoundly true in today’s culture (Gérin 1). Using characterization through clichés and relatable situations, Jane Eyre crosses the cultural gap and accesses deep, almost hidden ideals surrounding unrequited love; just one of the reasons for its success multiple years after it was released (Gérin 1).

The narration offered by Jane Eyre provides a perspective of which Charlotte Brontë has complete control over all aspects. Jane Eyre was written with a confident demeanor, a major departure from the typically submissive heroines of most nineteenth-century literature (Jane Eyre 1), developing characters which embodied ideals ahead of her time.

Charlotte Brontë’s writing is characteristically filled with rage and passion due to her isolation and desolate life (Keith 36). Using desolation as her inspiration, Brontë uses Jane Eyre to warn others of the dangers of being spiritually impure. She highlights this theme of repentance through the death of Helen, Jane’s mentor in boarding school. The juxtaposition of the strong, difficult, potentially rebellious heroine alongside the sweet, passive and forgiving character was a common feature of nineteenth-century literature, especially for Brontë (Keith 36); however, it was uncommon for a character to question the existence of God. “Where is that region? Does it exist?” (Brontë 97).

Jane questions where heaven is, symbolizing how she is too young to know how to repent for her sins. The novel’s conclusion documents Jane’s development, as she is victorious over two spiritual pitfalls: the dangers of human idolization, and the lure of excessive self-control (Lamonaca 183). Throughout the conclusion, Brontë makes clear the theme that religious purification has the ability to make those who are considered damaged or broken, whole again. Jane Eyre also touches on the key point that it is possible to extend forgiveness to others as Jane says: “Reader, I married him.” (Brontë 517). Brontë proves that through all of the trials which Jane was forced to endure, she only required time to find herself and regain the inner strength to accept Mr. Rochester.

The emphasis which this statement places on the marriage implies there is a connection between Mr. Rochester’s new status as a disabled person and their reinstated love (Keith 40). Mr. Rochester is essentially given a second chance with Jane through his suffering in the fire. This metaphorical catharsis destroys all evidence of his previous wife and reinstates him as a whole man, even though he is disabled. Due to this symbolic atonement, Charlotte Brontë explores what it truly means to be forgiven; both by God, and by one’s closest acquaintances.

In the 1847 gothic novel, Jane Eyre, Charlotte Brontë symbolically impairs one of her characters during a house fire to show the purging of his sins as she explores the theme of purification and penance. Using these themes, she builds up a young girl into an adult woman through repeated trials and tests of characters. Drawing inspiration from her life experiences, Jane Eyre is a romanticized representation of a life Charlotte Brontë could never live (Bossche 51), and thus situations were often exaggerated, but only to the extent of believability. Despite the novel taking many sharp turns along the plot, Brontë ensures that the theme of purification and penance is never forgotten, as it is alluded to several times throughout the novel.

When Jane returns to Mr. Rochester, she forgives him and sympathizes with his disabled situation: “Hitherto I have hated to be helped–to be led; henceforth, I feel, I shall hate it no more” (Brontë 453). This ability to both sympathize and empathize is a milestone for Jane’s development, and it marks her transition to adulthood. In forgiving the errors of the past, Jane prepares herself for a happy future which she is able to enjoy with Mr. Rochester, even though they have both sacrificed and lost so much on their journey to true love. Charlotte Brontë’s Jane Eyre embodies a turning point in literature: One where language is used to convey active and controversial issues with dignity (Bossche 51).

Brontë’s influence still runs deep, as some modern scholars have said: “(Her) language, like the law, is composed of dead letters, but it activates projections, ciphers, and fixations” (King 41), highlighting the lasting impact and moving qualities of the writing styles of Charlotte Brontë. Pain and regret are a natural part of growing up, but Jane Eyre proves that one is able to overcome any unexpected complications, purify oneself if they have patience and are willing to observe life through another point of view.

Purification and Penance in Jane Eyre, a Novel by Charlotte Bronte. (2021, Sep 14). Retrieved from https://studymoose.com/purification-and-penance-in-jane-eyre-a-novel-by-charlotte-bronte-essay 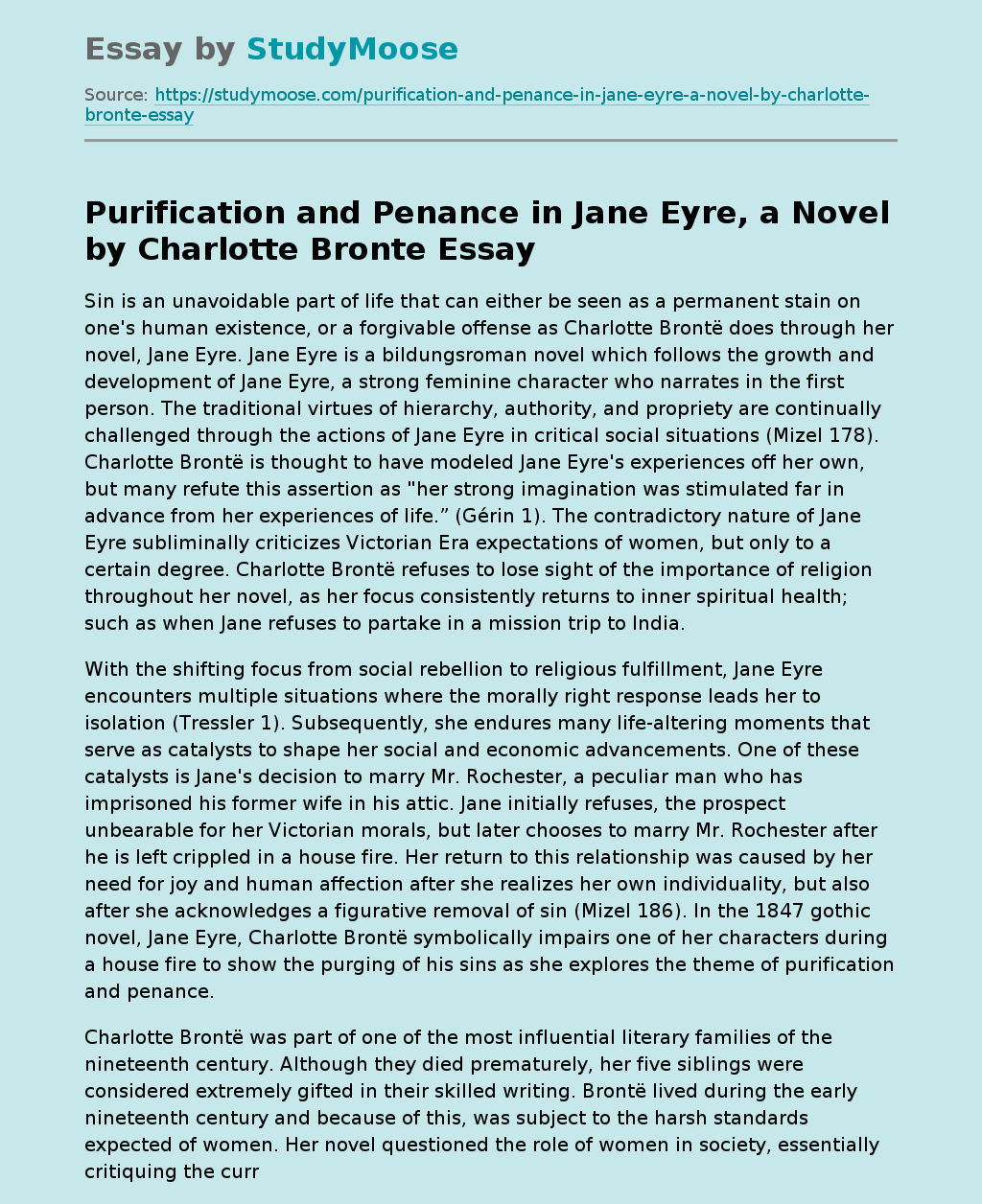