A. Attention Getter: How many people in this room own or have owned an IPod, IPhone, or IPad? Isn’t astounding how one man’s vision and innovation gave us all devices that have made the world today more connected than it’s ever been? Devices we NOW can’t imagine leaving behind when we walk out the front door in the morning. Whether it’s listening to music in your bedroom, reading the news on the train ride to work, checking your email at home or even sitting in a waiting room watching Netflix.

It’s hard to deny the influence and impact that Steve Jobs has had on modern culture.

B. Reason to Listen: My name is Eduardo Salazar and like many of you I too can’t live without technology and though my personal devices haven’t always been Apple products. More often than not if the device I was using wasn’t an apple product it was inspired by an apple device.

C. Thesis Statement: Today I will be talking about how Steve Jobs revolutionized the way the world uses and incorporates technology in their everyday lives and how it has impacted modern culture.

D. Credibility Statements: 1. Like many of you, technology plays a very important role in my life and sometimes I don’t even realize how much of a role it plays UNTIL I look back and notice that I don’t sit at a computer desk anymore typing my papers, I just flip open my macbook or how I don’t flip open my phone anymore to answer calls I just slide my finger across my IPhone screen 2.

After doing extensive research into Steve Jobs contributions to the tech space I would like to share what I’ve learned with you.

E. Preview of Main Points: 1. First, I will describe Steve Jobs’ introduction of the IPod and how it revitalized Apple’s product line and made the digital music market what it is today. 2. Second, I will examine Jobs’ transition into the mobile phone market with the creation of the world’s first user-friendly smartphone. The IPhone. 3. And lastly, I will discuss Apple’s huge overhaul of the tablet and netbook industry with his invention of the first IPad.

II. Steve Jobs revolutionized the way that people use and incorporate technology in their everyday lives. A. One way Jobs did this was with his introduction of the IPod. A beautifully crafted, easy to use mp3 player. 1. “Digital Hub” – Although Jobs had first revolutionized the tech space in 1976 with the introduction of the PC and that had served as the centerpiece for the digital revolution. By 2001 experts were predicting that the PC or personal computer’s central role would soon be over. a. It was then that Jobs came up with an idea that would change the tech industry. Instead of letting the PC get pushed aside he instead stated that the personal computer would now serve as a “digital hub” that coordinated a bunch of devices from music players to video cameras.

b. The PC’s new purpose would now be to link and sync with all your devices and this is where you’d manage all your music, pictures and other digital content. With the PC repurposed the IPod was now ready to be introduced. 2. Replacing The Walkman – Sony had beat Apple to the punch a long time ago in regards to music players with the invention of the Walkman but it was Jobs introduction of the IPod in 2001 that changed the way the everyone now buys and listens to music. a. It wasn’t until Apple’s IPod and Itunes music store took off that recording company’s started to embrace distribution of digital music as a business model worth investing in.

b. Today 10s of millions of IPods have been sold worldwide and more than 20 billion songs have been downloaded according to Business Insider. Transition: But with the Mac now repurposed and IPod sales sky-rocketing Jobs worried that there was one product that could do away with the IPod and that was the cellphone. B. This would eventually lead to Jobs’ revolutionizing the mobile phone industry with the creation of the first ever user friendly smartphone, the IPhone. 1. The Growing Industry – In the book Steve Jobs written by Walter Isaacson, board member Art Levinson recalled that Jobs was always obsessing over what could mess Apple up. According to Jobs “The device that could eat their lunch was the cellphone.” a. Camera sales had already begun declining since the addition of camera’s to cellular phones and Jobs knew the same thing could happen to the IPod if cell phones added a music feature to the device.

b. In response to this Apple partnered with Motorola to create a sibling to the already popular Motorola RAZR, the phone was called the ROKR. Unfortunately with the 100 song limit and not so skinny build the ROKR didn’t have the expansive music library that the IPod had and lacked the beauty and sleekness of the Motorola Razr. Jobs hated it. 2. Not the first – Other companies had made smartphones, Apple wasn’t the first but Apple built a better device and that’s what changed the industry. Choosing to do it on his own Jobs acquired a few companies already building touch screens and multi touch systems and began to work on his phone.

a. Same features, New phone – Jobs felt by integrating applications, contacts, email, calenders and music all in one but making the whole device more user friendly he could appeal to a desire cellphone consumers had longed for. 3. The Statistics – Apple introduced the IPhone in 2007, according to Forbes Magazine, today Apple has sold over 100 million IPhones. Transition: What many don’t know is that to build the IPhone Jobs drew several resources and ideas from a secret project he had already been working on. The IPad. C. Jobs sought to do away with the netbook market by replacing it with a product he felt was better and more useful, a tablet thin and light enough to replace netbooks and even some laptops.

By creating the IPad he did just that. 1. By 2009, tablets had already came and went. Taken over by the netbook craze of mini more portable laptops Microsoft and partners HP and Viewsonic had suffered major losses. 2. By the end of 2010 Apple owned 75% of the PC Tablet market according to an article titled “Taking The Tablets” published by the Economist. 3. The IPad hit the pc tablet market so hard that HP, a rival company having just released its Touchpad tablet announced its abandoning the product and market of tablets all together.

Transition: Jobs’ desire to produce powerful, mass-market, commercially successful products that change the world once again had came to fruition.

A. Review of Main Points:
1. In conclusion, Steve Jobs introduction of the first Apple computer in 1976 led his company on a path of innovation that would build for years to come. 2. Apple’s rapid growth in addition to Jobs’ pursuit to innovate eventually led to a cultural overhaul that would rapidly grow the music industry, the cellphone industry and the computer industry with products like the IPod, IPhone and IPad. 3. Following Steve Jobs death in October 5, 2011. The torch was passed on to CEO Tim Cook in the hopes that he would carry on Apple’s legacy and continue to innovate and redesign apple’s ever growing roster of products. 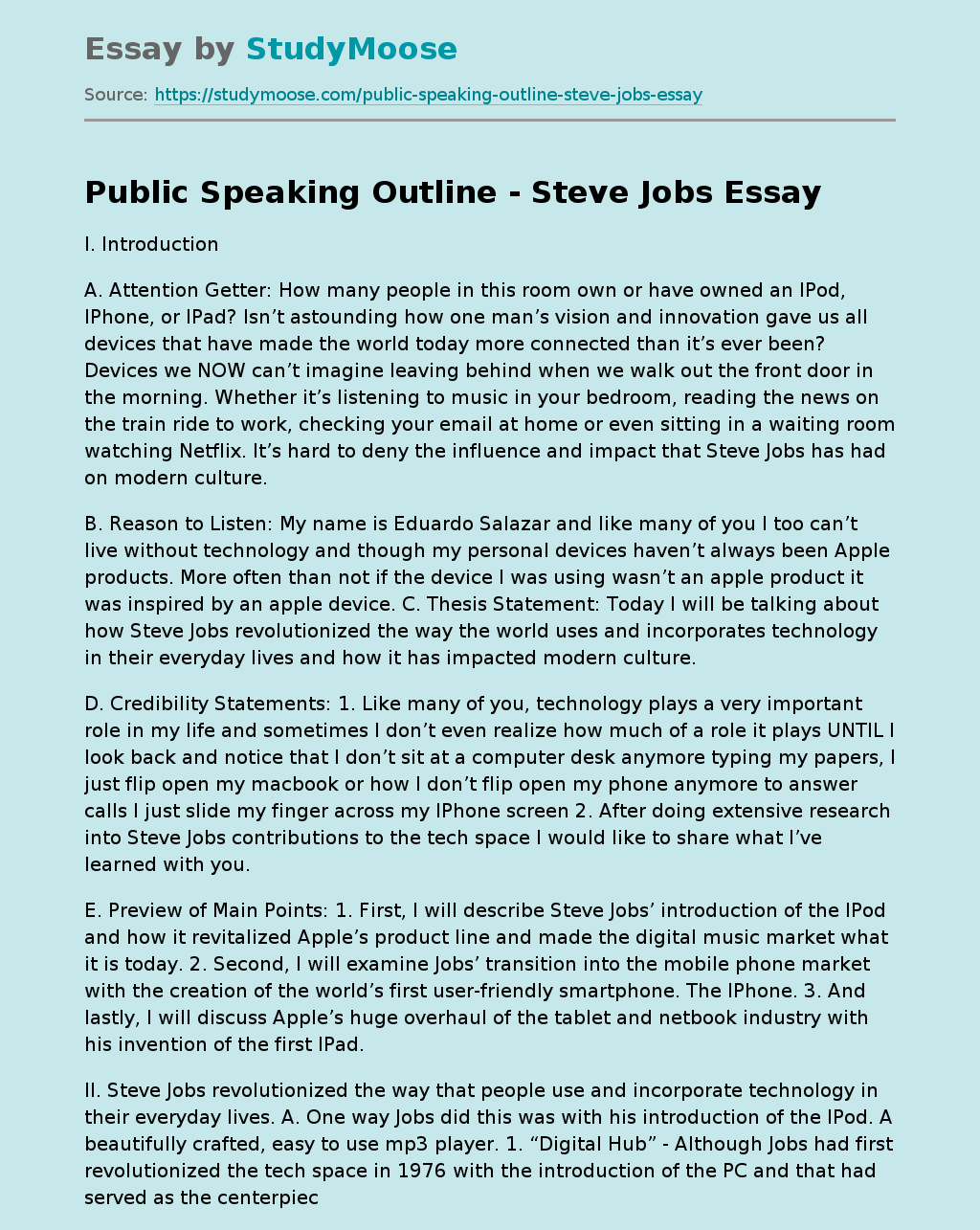