There have been many studies linking conduct disorder to antisocial personality disorder and sometimes to psychopathy as well. Conduct disorder appears in children and adolescents and involves behavior that violates rights of others and/or societal norms or rules. According to the Diagnostic and Statistical Manual for Mental Disorders, Fourth Edition (DSM-IV), the individual’s behavior must include actions such as aggression to people or animals, destruction of property, deceitfulness or theft, serious violations of rules, as well as a clinically significant impairment in the adolescent’s social, academic, or occupational functioning.

Don't use plagiarized sources. Get your custom essay on
“ Psychopathy as Antisocial Personality Disorder ”
Get custom paper
NEW! smart matching with writer

The DSM-IV states that in order for a child or adolescent to be found to be presenting Conduct Disorder he or she must present with three or more of the above listed behaviors in the past twelve months, including at least one in the past six months (McCaullum, pp. 6-12, 2001). Those who present with antisocial personality disorder may or may not present with psychopathy. There are two main assessment devices used to evaluate the level of psychopathy that a person exhibits.

The Antisocial Process Screening Device (APSD) is another device used to assess psychopathy in adults (Frick & Hare, 2001a). Both of these assessments consist of twenty behavioral items, scored from zero to two, that are used to measure whether or not a person possesses certain traits that, when combined, are common to those of people diagnosed with psychopathy. There have been many research studies conducted over the years concerning the validity and effectiveness of the Psychopathy Checklist- Revised.

The implications of this research study show that the Psychopathy Checklist- Revised can be used as a tool to gauge the likelihood of reconvictions concerning violent crimes, at least when discussing male violent offenders that present with schizophrenia. Another study, conducted by Walters and colleagues (2003), strived to determine whether the Psychopathy Checklist- Revised or the Lifestyle Criminality Screening Form (LCSF) compared to each other when assessing levels of disciplinary adjustment and recidivism.

Although the results of the study showed that the two tests were similar in results, the Lifestyle Criminality Screening Form only took about ten minutes to complete while the Psychopathy Checklist- Revised takes between two and three hours (Walters et al, 2003). Therefore, it was concluded in the study that if there was a high risk of offender recidivism or disciplinary maladjustment, the Lifestyle Criminality Screening Form would possibly be a better choice due to the cost-effectiveness of the inventory.

Due to the abundance of characteristics tested for in the Psychopathy Checklist- Revised, there have been many studies to assess which of those have a greater effect than others when discussing propensity to commit violent offenses. According to Blair and associates (2002), one of the specific symptoms presented in individuals with psychopathy is a reduced level of empathic response. There has been a positive relationship found between high levels of antisocial behavior and low levels of empathetic response.

This supports the reason that both the Psychopathy Checklist-Revised (PCL-R) and the Antisocial Process Screening Device for children include the lower levels of empathetic response to victims in their criteria of psychopathy (Blair et al, 2005). One of the most common methods in which this theory has been tested is by measuring the level of skin conductance in individuals while presenting them with images of people in distress. Both children with psychopathic tendencies and adults with psychopathy present reduced autonomic responsiveness (Blair et al, 1997).

In the case of those presenting with psychopathic tendencies, psychopathy, as well as some other antisocial disorders, individuals make less references to the victims included in the situation and also seem to have a more difficult time distinguishing between moral and conventional transgressions discussed in the situation (Blair et al 1995a). The second of the two previously mentioned deficiencies in the ability to distinguish between moral and conventional transgressions is even more prevalent when the rules banning the specific transgressions are removed from the scenario.

The study included 945 Black and White youths who were assessed using the Psychopathy Checklist- Youth Version. There was a lack of results showing any significant difference between Caucasians and those of African descent. However, there was an unexplained heterogeneity among the individual races. The researchers from this study advised that more research should be conducted in this area of study in order to attempt to discover the reason for this similarity within the individual races.

Another study, this one conducted by Kosson, Smith, and Newman (1990), used a combination of three separate research projects in order to come to a conclusion. The first study was aimed at examining the internal structure of the Psychopathy Checklist and and its scores in relation to several constructs relevant to psychopathy. This first study found that there were differences between Whites and Blacks in the distribution of psychopathy scores. It also noted a difference between the two groups in the relation of psychopathy to measures of impulsivity.

The second study was focused on assessing patterns of passive avoidance manifestations as compared to the results in a study conducted by Newman and Kosson (1986). It found that the levels of passive avoidance manifestations were similar, but not identical, in the two groups. The third and final study consisted of assessing the levels of criminal charges received by both psychopaths and non-psychopaths. This portion of the study was particularly interesting in that it found that psychopaths do, in fact, receive more criminal charges than do non-psychopaths (Kosson, Smith, & Newman, 1990). 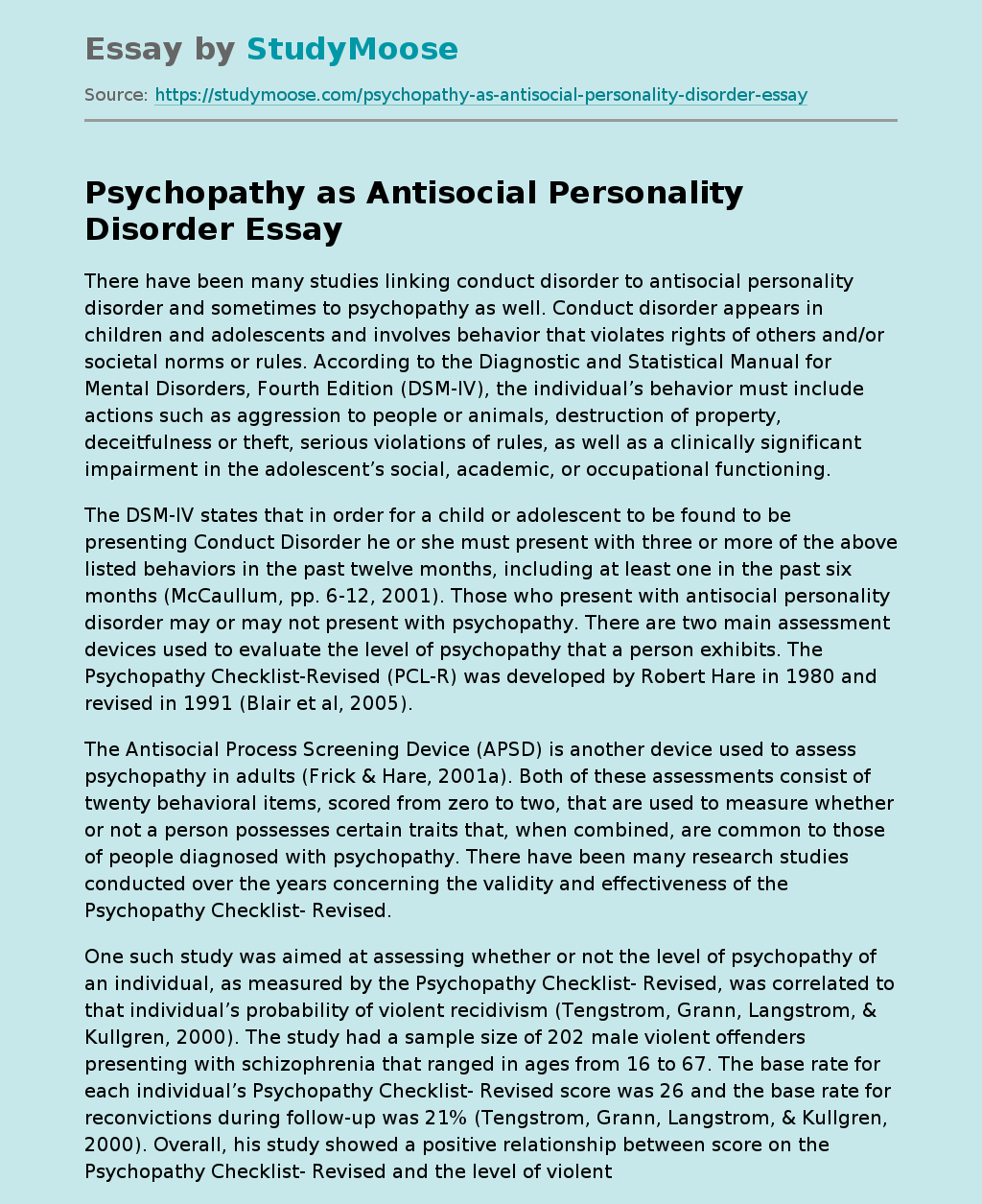