Psychology in "Still Alice" The Movie

The movie starts off with the scene of Alice celebrating her 50th birthday at a fancy restaurant along with her husband and children with the exception of Lydia. Then, the next scene shows Alice as a guest speaker in a linguistic class, this is because she is a world-renowned in her field of specialty. As she discusses something about babies, she forgets what she would say next and eventually losing her concentration. She comes home finding the house empty and decided to go for a jog.

Don't use plagiarized sources. Get your custom essay on
“ Psychology in “Still Alice” The Movie ”
Get custom paper
NEW! smart matching with writer

In the course of jogging, she suddenly stopped and decided to look around her – this is because she forgot where she is. You can find her very troubled during this scene but she composed herself finally remembering where she is and decided to head home.

The next part of the movie illustrates Alice going to the doctor. She tells him her memory problems and the doctor gives her some memory exercises, this includes asking her the name of her parents which answered correctly but there’s this one question that she failed to reply.

As the story goes on, Alice is showed preparing for the family’s Christmas dinner while doing some memory exercises for herself. During the dinner, Alice introduces herself to her son’s girlfriend which confuses the latter because they have been introduced earlier. As she goes back to the doctor, she finds out that her MRI is fine but the doctor insists of having another test for her because she might have early onset Alzheimer’s Disease.

As days passed by, Alice is getting more anxious of herself having the disease.

She decided to tell her husband about it and he wouldn’t believe it causing Alice to break down. Her husband decided to accompany her in visiting the doctor and the doctor confirmed Alice’s condition. They opted to tell their children about and let them take the test for the disease is hereditary. The results surfaced that Anna, the eldest daughter is positive for the disease. As the story is progressing, Alice’s condition seems to worsen, she forgot about important dinner plans and this caused her husband to worry about her but despite this, she still wants to keep her job and stay as long as she can still manage to.

At this point, she started writing a note to herself in her phone with basic questions such as what is the name of her oldest daughter, and then records herself talking to herself telling herself to take a bottle of pills to commit suicide. In the cell phone note it says to watch that video when she can no longer answer the basic questions. Eventually, all of these happened. Her condition continues to deteriorate but despite all of these, her family continued to guide her and support her. Along with struggling because of the disease, she decided to make every moment meaningful. In the final scene, it shows Alice cannot speak well anymore and we assume that she will ultimately forget everything.

II.1. How relevant is the understanding of the illness contribute to a functional adjustment to the life of the person?

As a human being, the only one who can tell what you really feel is yourself. You know what you can do and up to what extent you could go on. This goes the same to the understanding of our own illnesses in relation to the functional adjustment in our lives. Knowing or being aware of what our disease are could really help us a lot. It serves as a preparation for us and for our loved ones. Just like Alice in the movie, because she understands what her illness is, she is able to at least take precautionary measures and was able to adjust her daily living. It also gives the people around us the right amount of understanding they need to give so as to support in our struggle against the condition. Furthermore, understanding your illness will also help you adjust to what might really happen to you.

II.2. Personally, how were you affected by the movie?

Honestly, I was moved by the movie. The disease may be rare but it’s fatal. I felt pity for those persons who have it for they would forget everything they worked for and all the happy moments of their life and even forget about themselves. It made me realize how difficult it is to be in that situation for I cannot even imagine myself in Alice’s shoes. The movie also taught me the importance of family – that no matter what, they will always stick by your side. They will try to understand you and support you even if you couldn’t recognize them for it is the meaning of a family – it’s love.

Psychology in "Still Alice" The Movie. (2016, Sep 25). Retrieved from https://studymoose.com/psychology-in-still-alice-the-movie-essay 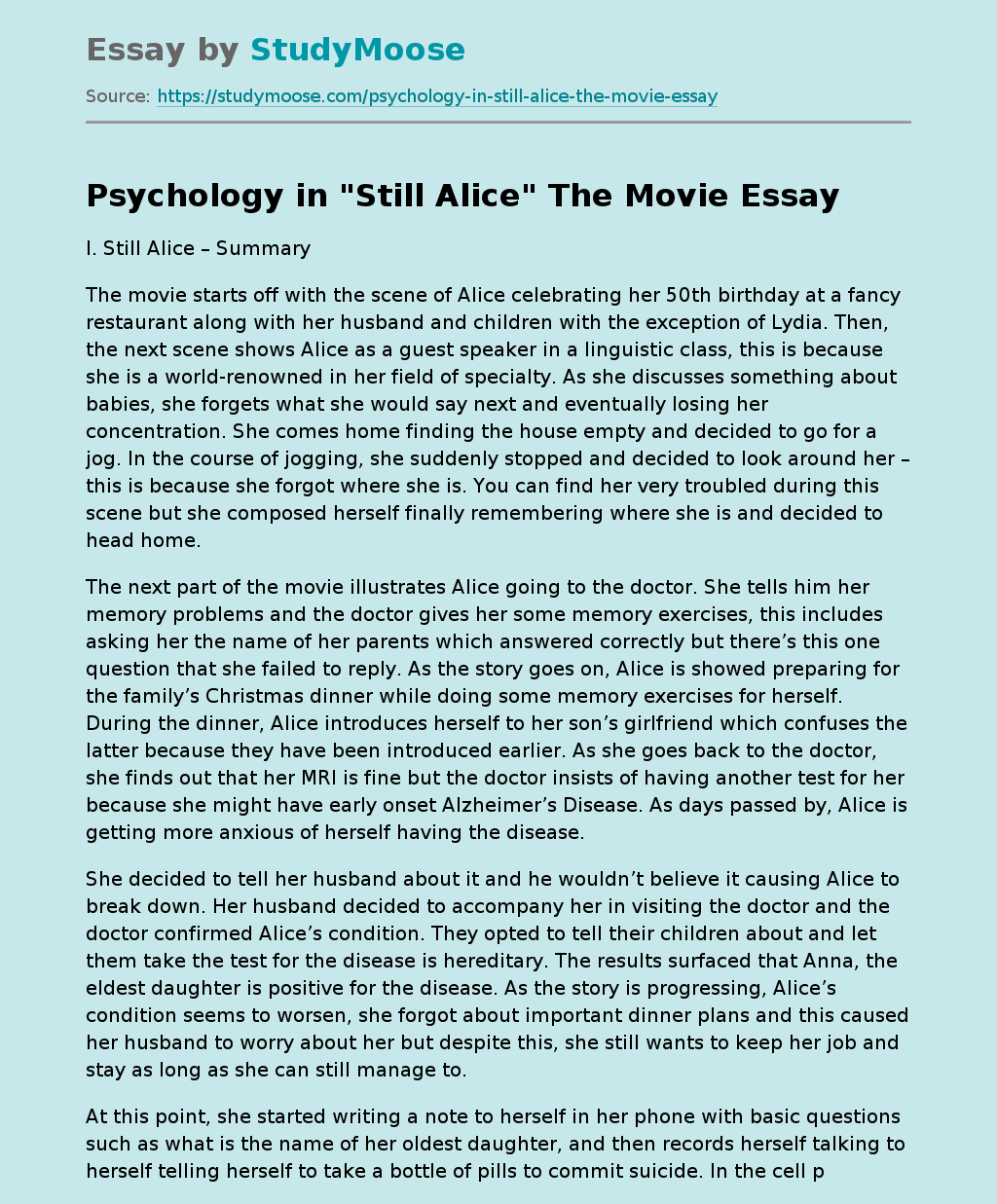