1.Jack is a second-grade student. He seems to have no interest in learning, often daydreaming in class and frequently disrupting the class by throwing objects at other students. Describe how a biopsychosocial approach might provide both an integrated explanation of Jack’s classroom behavior and practical suggestions for helping Jack to cope more effectively with the challenges he faces.

Jack is in second grade and is having a hard time behaving in school. Such as not paying attention and disrupting the class.

Don't use plagiarized sources.
Get Your Custom Essay on Psychology and Yellow Bile Just from $13,9/Page

Those two factors seem to play into integrated biopsychosocial. Biopsychosocial has three different elements to it: biological, psychological, and social-cultural. These three things can provide three different ways and reasons of why Jack is acting the way he is in class. An example of biological would be ADHD or ADD, which could be helped by a doctor prescribing him a medication. Psychological could have a lot to do with his acting out in class.

He probably has the feeling he needs to fit in and find his group of friends.

Psychological problems could be helped in many ways, but one that would really help Jack is possibly seeing a school Counselor. Last but not least, that deals with Jacks behavior is the social culture. This could also have something to do with his friends. His friends could be giving the impression they like him more or will be his friend if they act out. Once the staff and parents look into these three different elements and make changes, Jack will be on the right track again.

2.List and define the principal ways psychologists observe and describe behavior. When psychologists observe and describe behavior, they do it in a systematically, or showing many different methods. A few different methods are case studies, surveys, and naturalistic observation. Case studies are the oldest research method and studies one person in hoping to find the truth of ones problems. A survey though looks in a different angle than the case study. A survey asks many questions which go into detail about one’s behavior. The survey will also hopefully let them figure something out about themselves. The last method of how psychologists observe and describe behavior is naturalistic observations. Psychologists use this in natural environments and can provide research and answer questions. Naturalistic observations do not explain behavior but describes it, according to our book.

4.Describe how an understanding of both a normally functioning brain and a split brain enables us to better appreciate the fact that most information processing takes place outside of conscious awareness. To fully understand the functioning of the brain and a split brain, we must first realize that most of our information we take in and store in our brain does take place without us realizing it. The split brain shows that both sides of the brain do not work together which gets in the way of putting information together. The normal brain does work together and does put information together. Whether it’s a normal brain or split brain, we are able to see the amazing things the brain does and how it works. 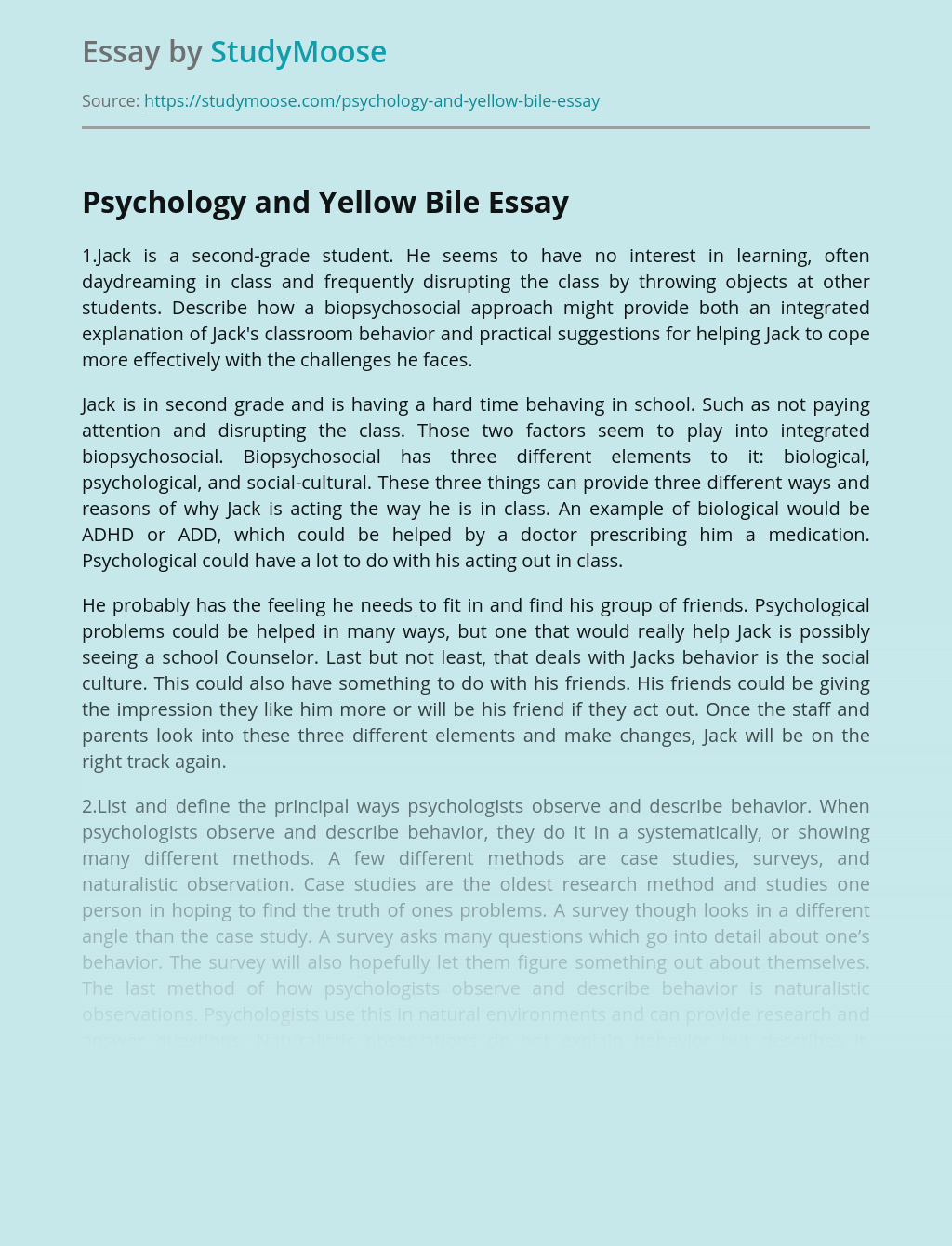 Omkar Kawade Charles Ramskov Psychology Essay Perception can be defined as the process of how an organism interprets a sensation. Many psychologists studied different types of perception, such as Constructive Perception (top-down) that was studied by Rock, Neisser, and Gregory. Another approach of perception was the Direct / Ecological (bottom up) which was studied by... VIEW ESSAY

Psychology is a scientific and research based study of human mind-set and behaviours. The field of study focuses on emotions, characteristics and behaviours of individuals in their daily lives and their behaviours when interacting with other people. Wilhelm Wundt is the father of psychology, whom set up his first laboratory in Leipzig, Germany in 1879.... VIEW ESSAY

Sigmund Freud’s Psychoanalytic Theory is often regarded as the most comprehensive personality theory and the first in its area of study to theorise human behaviour but through the ages Freud has raised numerous debates on whether his theory of human behaviour has been more controversial or influential. In this essay, I will argue that the... VIEW ESSAY

Throughout the whole book Frederick enjoys his loneliness which occurred due to his abnormal upbringing. Fredericks was guided through life by his uncle whom he sincerely adored and who has become his spiritual life leader. Frederick deeply suffered after his death and didn’t manage to build such strong relationships that he used to have before.... VIEW ESSAY