Psychology and Christianity: two subjects that have seem to become almost impossible to talk about hand in hand. Psychology has become one completely different subject than Christianity (theology) and both have lost all contact with the other. Psychology is strictly a science and Christianity is solely based on faith and religion and the two can not be integrated together. The real question is why? Why can’t psychology and Christianity be integrated and used together as one? This paper will give some dictionary definitions of both subjects, will provide definitions based on the authors opinion, and will discuss the authors viewpoint on the integration of the two.

Don't use plagiarized sources. Get your custom essay on
“ Psychology and Christianity Integration Paper ”
Get custom paper
NEW! smart matching with writer

In modern days, religion and science can not be compared but rather contrasted. The integration of the two does not make sense for those who believe there should be empirical evidence for everything or people who are dependent on the Christian religion and this is where society runs into a problem. The author of this paper, however, believes there should be no problem integrating the two. In her eyes, psychology is the study of the mind and behavior, not necessarily a science but more a study.

She does not use the word science because she understands that there are things in the field of psychology that have no empirical answer and therefore can not necessarily be a science, because all things science can be tested and proved.

Being a Christian, she believes Christianity is a name for the faith in her Lord Jesus Christ. Because she is a Christian, her window to the world has been shaped through the Word, her experience and what she knows to be true. In her eyes, God is the creator of the Earth and the Heavens and all things work because of Him. She believes that all things can be integrated with Christianity (theology) because God brought everything to this world. She has confidence in the fact that psychology and Christianity can be integrated. She sees the faults that can come of it but she also does not see a reason for complete separation.

According to the American Heritage Dictionary (2000) defines integration as making something a whole, unifying different things as one. The author of this paper understands the integration of psychology and Christianity like this…psychology is the head (mind) and Christianity is the heart (soul) but neither one can work without the other. Because of the progression of the world, with technology, science and the need to prove all things empirically, faith has, in a way, been pushed away and not as important, but this is wrong. God is the one that has placed people on this Earth to provide progression and advances and without Him all things would not be possible. So, in order to fully understand these different non-theological subjects it is important to understand that faith and religion are the reason for all other subjects and that integration is actually completely necessary. But there are limitations to this.

The advances of science and technology have molded the human mind into thinking that there is a need for proof because are very few things that cannot be proven and why would believe in something that cannot be proven when there are so many things that have been empirically proven? This is where the idea of integration gets messy because there is no experiential way to prove the existence of God and his all-mighty power. But this argument can be debated even further. Let’s take a peek at the idea of the unconscious mind. Clearly this is a psychology topic but why can’t it be related to faith because indeed the unconscious mind has not been completely proven. There is proof that there is such thing as the unconscious but no tangible proof of what goes on and what controls the unconscious. For example, there is no way to prove or disprove the topic of ones dream.

A scientist can set someone up to an EEG and measure their brainwaves while they are dreaming but there is no way to prove or measure the content of their dream. This is much like faith. One can be tested on the existence of their faith and religion but there is no true way of proving it; but there is also no true way of disproving it. So what now? Well in the eyes of the author there is no answer. Either you believe in the possibility of integration or you do not, and a majority of people who do have had an experience that has allowed them to see the true importance of said integration.

The other problem that arises with integration is that some Christians are overly explicit with their beliefs. This is bad because people, in these days, are afraid of explicit people so these type of Christians are shut out by people in the scientific realm, because yes God created science but for those that do not understand that going after it in that way turns them off. Psychology has its domains and Christianity has its domains but there is some overlap…it is when to approach that overlap that gets messy. There is also the secular stand of “Christians being hypocrites.” There is a chance that psychology and Christianity have become so separated because some Christians do not want to be judged by other Christians. Back in the day, Christians would go to their pastors for help but now, because of fear of judgement, Christians want an outside view, a psychologist. Now, in this context, it is hard for integration. But this is not what integration needs to mean.

Integration is simply unifying two things as one. Understanding that God created the Earth and the Heavens and that all things are made and work in God’s power allows for integration to happen.  So what do we need to do? Do we need to come up with both a psychological and theological definition for integration? No. We simply need to come to the conclusion that Christians will believe in Christian ways and scientists will believe in scientific ways and how both understand integration will be dependent on each individuals life, experience and truth. Because on both ends of the spectrum, there are unanswered questions and there will always be unanswered questions. Questions like who is God? what is sin? how do we measure God’s truth? who says Scripture is true? what does faith look like? what is the unconscious? how do we measure the content of dreams? how do we measure the idea of “seeing the light?”

These are all important questions but questions that without extreme progression and world advances will not be answered. That type of progression will not exist in the lifetime of this author so what she has concluded is that God created the world and the Heavens and that he creates all things in it. Therefore, in order for science to work, in order for psychology to work, there must be an acceptance of it being God’s world. Because if there is no God, there were did all this stuff come from? 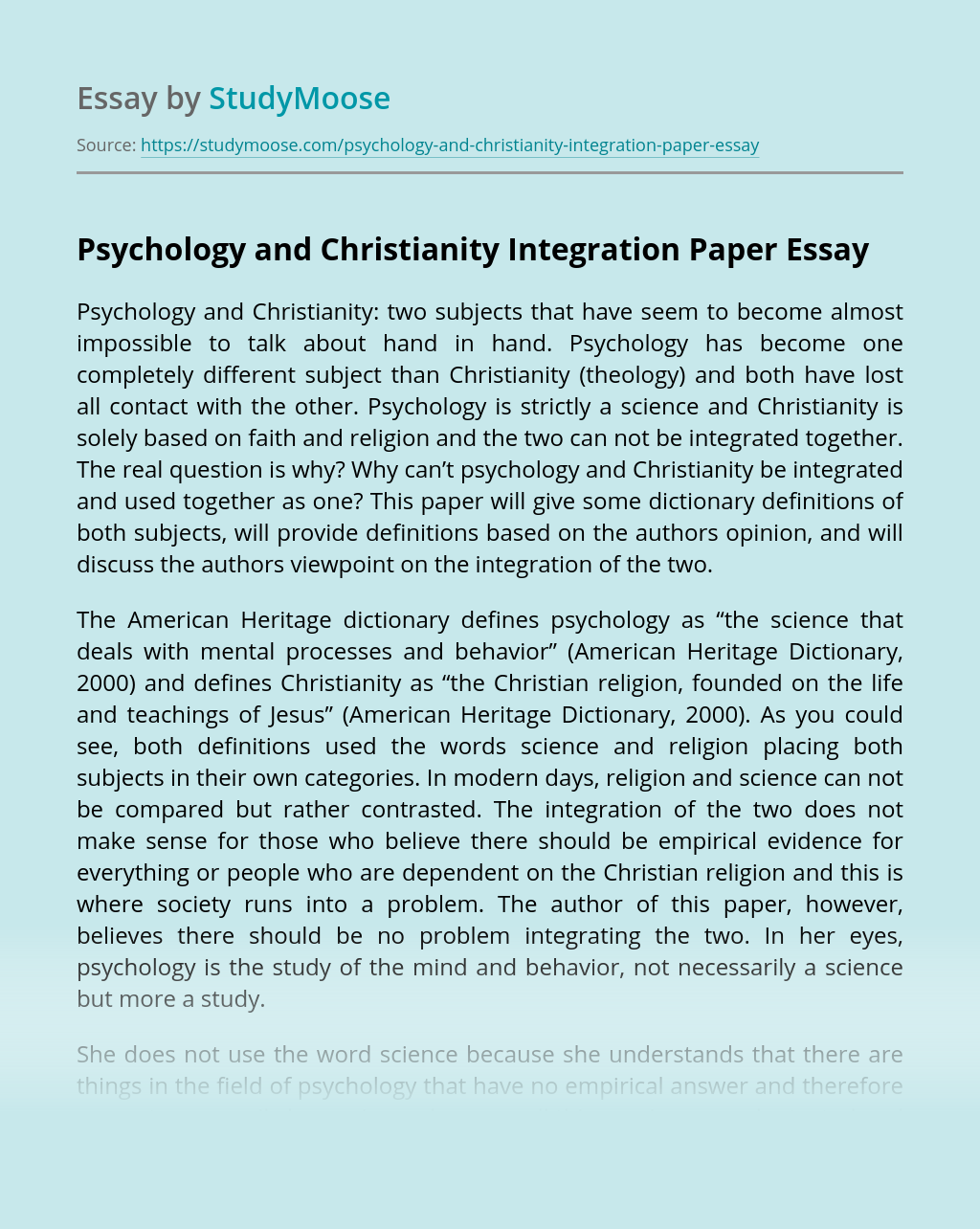