Shakespeare used the tragic story of the a winning duo Macbeth and Lady Macbeth to show that being overly ambitious can have a corrupted effect on a person. In this play, the author demonstrates the characters strive between masculinity and cruelty and how it changes their thoughts and actions. The characters are well developed from the beginning to the end to prove how they have both changed throughout the play. Both Macbeth and Lady Macbeth have been portrayed to have both similar and at the same time different traits.

Don't use plagiarized sources. Get your custom essay on
“ Psychological Development of Macbeth and Lady Macbeth ”
Get custom paper
NEW! smart matching with writer

The author depicts the two main characters, Macbeth and Lady Macbeth as being driven by their greedy ambition for royalty and power. We see that in that Lady Macbeth is so power hungry and imagines to be queen that she makes a plan to kill Duncan and consequently manipulates her husband into killing him by mocking his masculinity when he shows some reluctance to the plot to kill Duncan. He says “ But here, upon this bank and shoal of time we’d jump the life to come,” ( Shakespeare 192).

Macbeth is desperate to keep the throne after killing Duncan. He even plots to murder Banquo who he still thinks is a threat to the throne and must get rid of him. Both Macbeth and Lady Macbeth are cruel. Lady Macbeth plots out the assassination of Duncan while Macbeth killed Duncan and Banquo.

Lady Macbeth is confident and truly believes the witches while Macbeth is suspicious of the witches’ prophecies. However, he has a strong desire for power and wants to be the next king.

This comes out clearly when he is outraged that Duncan did not appoint him to the throne. “Stars hide your fires; Let not light see my black and dark desires,” ( Shakespeare 189). Macbeth is light with his conscience while Lady Macbeth is heavy with ambition and greed. Against his better judgement, Macbeth kills Duncan but is later overwhelmed by guilt, and regret because of his evil deeds. He acknowledges that his actions will haunt him until his death. Meanwhile Lady Macbeth tries to push irreligious acts deeper, so it can help her ignore what she has done.

As William Shakespeare develops the characters, their state of mind seems to change at the end of the play. Macbeth, who at the beginning of the play seemed confident and content with his kingship has evolved and feels that if his reign is worthless and unimportant. He is depicted as a brave warrior who won battles for the king. Initially, one would have assumed Lady Macbeth was the strong hearted one, enough to deal with the consequences of their evil deeds. Macbeth seems to be failing. He says,” Nature seems dead, and wicked dreams abuse/ The curtained sleep,” ( Shakespeare 198). In the end, even after his realization how he commited murder and wrong doings to receive the crown he can face his fear. The magnitude of her actions finally drives Lady Macbeth mad and to suicide. Not once does Macbeth consider suicide.

The story of Macbeth has been written to show that too much power corrupts and that we should be careful and not to be over ambitious. It also goes to show us that we have control over our day to day lives. Shakespeare wrote Macbeth as a tribute to King James, the new king of England, as he included elements such as witchcraft which merged well with the kings interest of demonology. Through Macbeth the author shows what effect ambition and guilt could have a person with a weak character or personality. 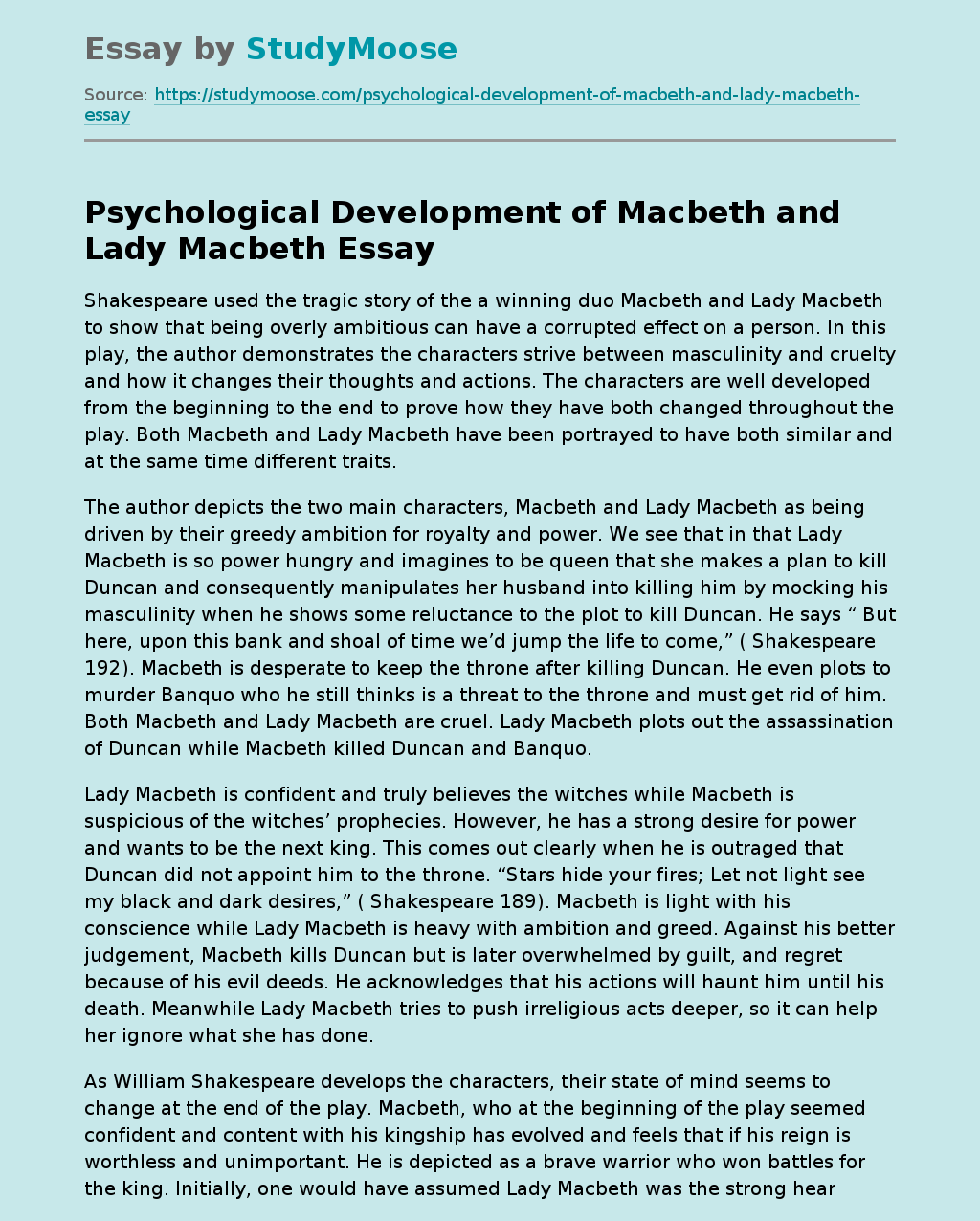