Don't use plagiarized sources.
Get Your Custom Essay on Psychological Barriers in Communication Just from $13,9/Page

4.Lets take an example of a political gathering, a politician standing and delivering his speech to the audience who support his party, now among those people there must be some people of the other political party, the people of his own party would be at high morale during his speech and become charged by his each word, this is because they are emotionally attached to that leader, but the other hand the people of his opposing party give a deaf ear to his words and take them as a political drama, so the communication to those people becomes ineffective between them while it will be effective between him and his party followers.

5. Now let’s take an example of two brothers Khalid and Tariq. Khalid is the elder brother. Khalid wants to forbid Tariq to meet his friends whom he thinks are a bad company. Now there are two ways of saying so to his brother the one is the polite way and the other is the harsh way. It depends on the emotional attachment of two brothers that which way would be accepted by Khalid. There would be no emotional barrier among them and the communication will be successful but in the other case if Tariq does not bears the strictness of Khalid he will refuse his orders and will continue with his doings, so in this way there is a barrier in communication between them.

6. Perceptual Barriers. Perception is the process of gathering information through our senses, organizing and making sense of it. Previous experience and learning, attitudes and interests, needs and feelings, and the current situation all affect perception. All people do not “see” the same thing when looking at a visual image. Perception differs from individual to individual due to a variety of personal, socio-economical, and cultural differences. Age, gender, race, and past experiences are examples of personal perception filters. Young children, teenagers, and adults “see” things differently. As they grow and develop, children learn to see and comprehend relationships and themes from visuals instead of simply seeing individual objects and shapes. Socio-economic filters include occupation, level of education, environmental factors, and family upbringing.

Cultural filters include language, For example, Eskimos have many unique words describing different kinds of snow. Not just adjectives that go in front of a standard word for snow, but totally different words. Customs, belief systems, and historical perspective every characteristic of an individual influences what that individual chooses to see, hear, taste, touch, and smell. How information is interpreted to create meaning for an individual is also influenced by his/her unique make-up and background. The communication becomes ineffective due to these misperceptions. There are further three cases of failure of communication due to wrong perception. It also depends upon the frame of reference of one’s mind which basically controls the perception of an individual.

7.In first case, people perceive thinks differently sometimes they think totally opposite to the thing which is being under discussion or being delivered to them. In another case example people sometimes fill in the information without checking accuracy. Even though there is no square in the image shown on right but our brain just fill in and perceives that there is a square in above image. Hence perceptual barriers are due to the different ideas and concept of people which they acquired from their lives and experiences, so there should not be any wrong perception for achieving the goal of communication.

9. We simply cannot absorb all this information flowing our way, so, we must screen it selectively. One factor in the way people select is timing. Some messages that may be effective at one time might be blocked or even detrimental at another time. For example a letter of congratulation or condolence sent out immediately after the event is more effective than one sent later. A meeting about accident prevention gets more attention if it follows an accident than if it precedes one. A report turned in late may have a highly negative effect if your supervisor has been anxiously awaiting it or may have little effect if he is busy with other matters.

10. Another selection factor is context. In one research experiment, subjects were shown two identical pictures of a rail road train in a station.

One captioned ‘parting’ and the other ‘arriving’ on a scale ranging from ‘sad’ to ‘happy’ the subjects tended towards ‘sad’ for the first and ‘happy’ for the second. The subjects received the same data but — the suggestiveness of the context- the captions influenced the way they perceived the picture.

11.In the business world, you might be more apt to read an article if it appears in a magazine you respect or a report if it is accompanied by a cover memo from your boss. Similarly, you might tend to pay more attention to a presentation if it is held in a boardroom or a well appointed conference room, or listen more attentively to a sales talk in an elegant restaurant or hotel.

12.One more aspect of selectively, we tend to remember the extremes and forget the middle ground. Think about comments you may have gotten from a teacher, a coach or a boss. Most people remember that most positive and the most negative and forget the neutral or middle ground comments. Therefore, your communication may be blocked or ‘selected out’ simply because it does not contain startling positive or negative news. 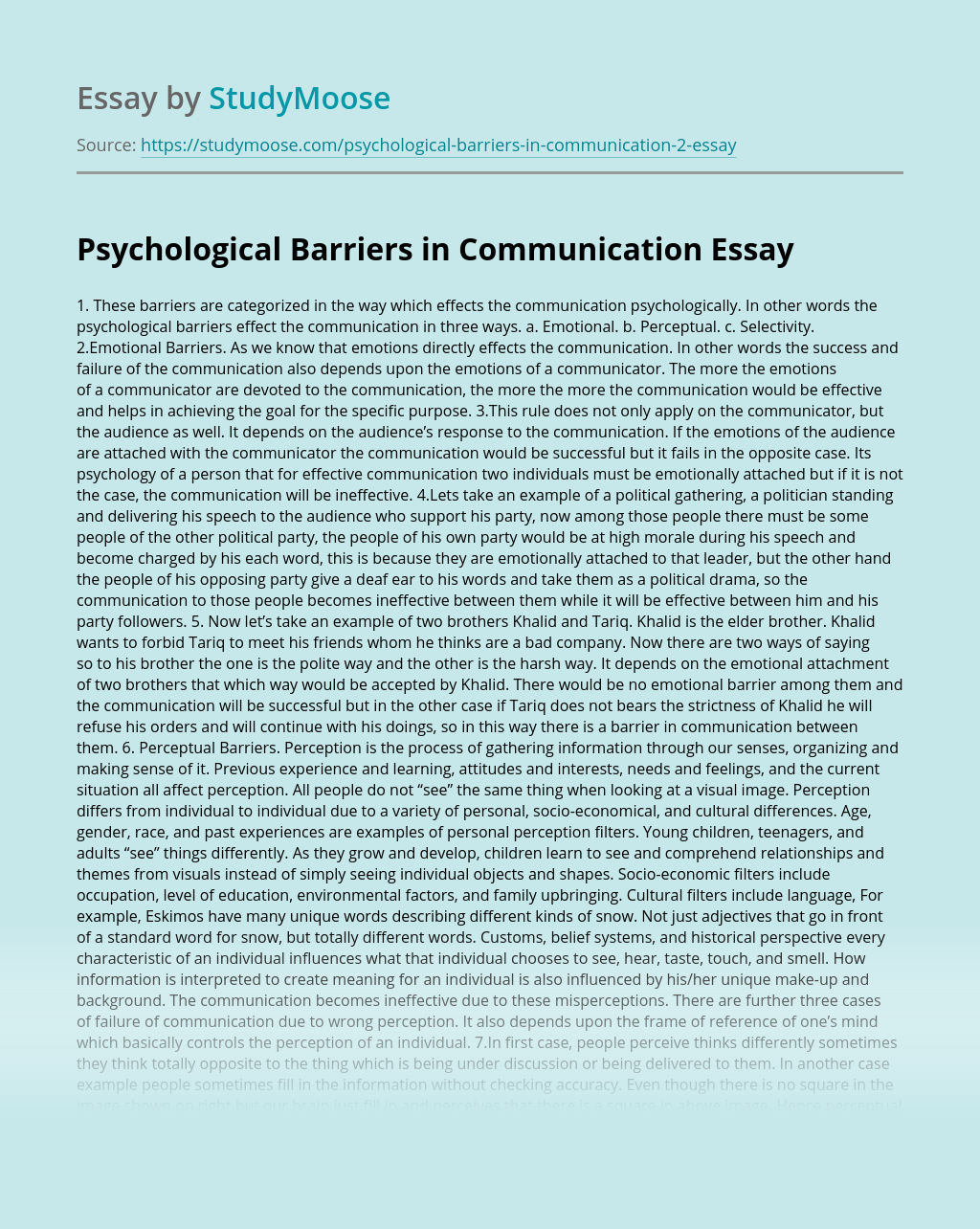 You know it when you see it. It is not that hard to tell whether a piece of writing is good or bad, you just have to read it. And it is pretty important to be able to discern the difference, if you ask me. But things get more challenging if you have to explain... VIEW ESSAY

In modern life, people communicate with others in different ways; for instance, the way that directness or indirectness can affect the success or failure of communication. So, we wonder which way is better for human communications. The definition of directness is the character of being accurate in course or aim or straightforwardness , the quality... VIEW ESSAY

Learning outcomes: Outcome 1 Understand why effective communication is important in the work setting 1.1 Identify the different reasons people communicate. The main reason we communicate is because we want or require something. This may be for comfort: We may require something for our comfort in the form of food or drink, keeping warm or... VIEW ESSAY

Aims / details: The primary purpose of the report is for you to work with three other people and undertake a study of an organization – the steps for establishing team performance plans, the development and facilitation of team cohesion, the facilitation of teamwork and, liaising with stakeholders. Reviewing the effectiveness of teams within an... VIEW ESSAY

In speaking of organizations I believe that how organizations communicate is an extremely key factor in success versus failure. The purpose of this paper is to talk about Communication, Information and Coordination, specifically Vertical and Lateral Coordination in organizations. I will reference the four different organizational frames we have learned about as a reference guide... VIEW ESSAY