Fight Club is a novel written by Chuck Palahniuk which was eventually made into a movie. The novel is different from usual stories in so many ways because it’s first and foremost, geared into the lives of young men. There have been a lot of books that revolved around the stories of young women that is why, I believe, Chuck Palahniuk was hugely successful in writing this novel. It’s focused on a life a man, the Narrator, whose name was never blatantly revealed but as the story progressed implies that his name was Jack.

Don't use plagiarized sources.
Get Your Custom Essay on Psychological Analysis of Fight Club Just from $13,9/Page

He symbolizes an ordinary working class man who, like everyone else, is looking for fulfillment in his life however he tries to accomplish this in odd ways. Jack is noticeably a disturbed person who is suffering from insomnia. The first obsession we would notice is his unusual collection: furniture. It’s soon begins to become a little bit more strange when he starts attending random group therapy sessions on medical concerns which he doesn’t even have.

Attending these support groups has helped sleep at night but still he ends up crying to relieve stress from his dull, ordinary life.

Eventually, when he still felt unfulfilled, he moves on to creating his underground “Fight Club” with a certain Tyler Durden. He then becomes more and more absurd, his obsessions become unhealthy. By the end of the movie, we learn that Jack suffers from Multiple Personality Disorder and that Tyler is actually his alter ego. Upon watching the film for the first time the revelation at the end would come off as a shocker but once you really analyze it, the juxtaposition of the events leading up to the ending and the probable reality is not very far. He shares his obsession with furniture collections with common homeowners today.

People usually find comfort in having a properly furnished home; they feel a sense of accomplishment and think that it’s a reflection of their successes work-wise. Even with this, though, Jack still felt void and that his life is still meaningless. He starts going to a support therapy group as advised by his doctor. He does this to find acceptance and love from other people, which is also a common desire of human beings. Although he doesn’t really have that certain condition he’s attending support groups for, it was deemed successful until he met Marla Singer who, like typical ovies where girls tend to “ruin everything”, seems to have flushed all his efforts down the drain.

Marla turns out to be, like Jack, a faker. She started attending the support groups like Jack does which eventually turned into a reflection of what he’s been doing. Moreover, he then turns to like her, to make things worse. Jack then finds himself immensely unhappy so out of his frustration he tries to come up of a resolution, hence, Tyler and Fight Club. Tyler is introduced as someone Jack meets on a plane ride; Tyler eventually becomes a huge influence in his life, who then becomes his co-founder of Fight Club.

The first fight was between Jack and Tyler, which is in fact just Jack against himself. Other men begins to join their club, their members are mostly the ones that grew up without their fathers. Throughout the movie Fight Club soon escaladed into Project Mayhem where they blow up buildings owned by major credit card companies and setting everyone’s debt back to zero. When Jack realizes what he’s doing, he finds that Tyler is actually him and tries to commit suicide by putting a gun in his mouth.

He still lives, but Tyler was gone. He wakes up in a mental hospital and the movie ends with the fight club members still trying to pursue the initial plan, stating that Tyler will be back. Fight Club is a fictitious story and also very far from reality but there were a lot of psychological truths presented, such as gender identity, Freud’s Id, Ego and Superego; and Maslow’s idea of self-actualization. These components make this movie absolutely interesting to watch and it leaves you with so much more to think about afterwards. 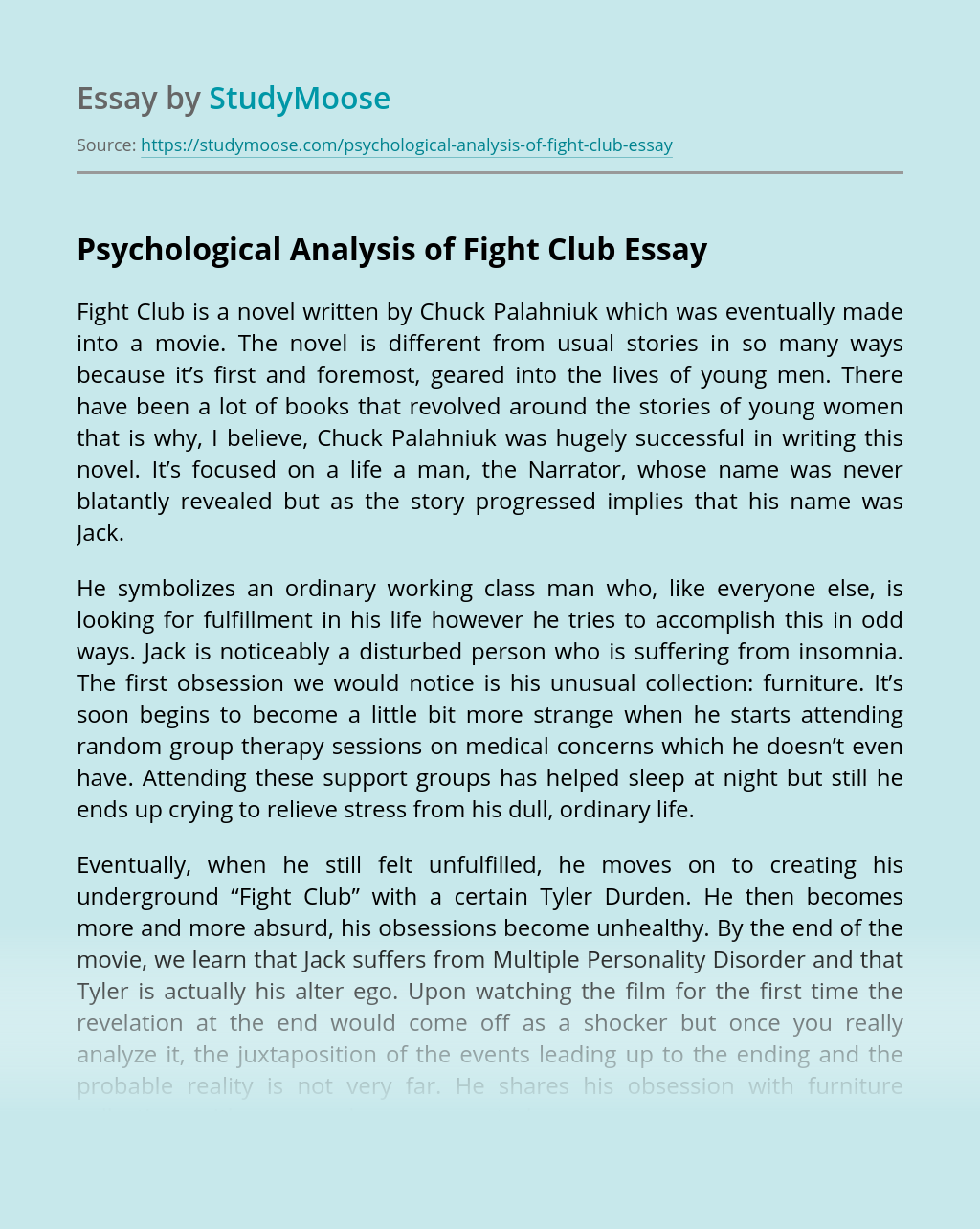 The Hexadecimal Company has experienced rapid growth since the company opened. They began as a medium sized manufacturing firm supplying computer components and now have moved into nanotechnology and advanced electronics. The President John Zoltan has decided to create an OD group. Zoltan, along with an OD practitioner hired four employees outside of the company...

These approaches and teaching strategies are important tools toward the development of the students’ intellect, attitudes and spirit that they may be inspired to study and understand Araling Panlipunan. Role playing This strategy is used to provide the participants with the opportunity to “feel” the situation rather than merely intellectualize about it. Role- playing also...

View sample
Get Essay
The Daodejing of Laozi

The Daodejing of Laozi is a book of poetry pertaining to Chinese philosophy. The Daodejing is most often translated into meaning “the Classic of the Way and its Virtue.” Its text is full of religious verses that are often compared to the Bible. Throughout the text, the Daodejing encounters a variety of topics including: dao,...

The Porfiriato Era began in 1876 – 1911 when Diaz along with his supporters and army took complete control of the Mexican government. Diaz won the presidential election in the 1877 and started abusing his dictatorial powers from that point on, repressing democracy and freedom in his own country for the next 35 years. Diaz...

I want to present concern a 30-years-old woman, suffering from strong anxiety about her exam. I think this case is too much interesting, due to even though she had damaged up his studies in economic for five years, she tried to cope from this deficits, and finally advance effectively and follow further advanced studies in...