“The Fly” by Katherine Mansfield is a short story which focuses on the trials and tribulations faced by those who lost relatives in World War One. Many who lost family and friends in the war struggled for years with grief, while others accepted the shortcomings and managed to overcome it. Everyone faced their own challenges, and everyone overcame them different ways, or in some cases not at all. Katherine Mansfield is one of many people who lost relatives in the war.

Don't use plagiarized sources. Get your custom essay on
“ Prose Appreciation “The Fly” By Katherine Mansfield ”
Get custom paper
NEW! smart matching with writer

She herself lost her brother in WW1 like Mr. Woodifield and the boss did. She wrote this story because she felt like she was a victim of helplessness and darkness, struggling with grief and also struggling with the Tuberculosis treatment she was going through at the time. This relates to the story because the boss felt like he was on his own after the death of his son, “Ever since his birth the boss had worked at building up this business for him; it had no other meaning if it was not for the boy.

” He felt like he had no reason to do anything, like he was helpless and in the dark.

The theme ‘time is a great healer’ fits these thoughts, because no matter what the boss might think, over time he is slowly getting over the death of his son even though he said “Time, he declared then, he had told everybody, could make no difference.” Six years have passed since the death of their sons, and Mr.

Woodifield has overcome his grief, and has forgotten about his son, needing the help of whisky to remember that his daughters visited his grave. The boss however, believes that he is still wrought with grief, when in fact he has overcome it. He can no longer cry when his son is mentioned, and he can no longer use the photograph on the wall to force the emotions of grief on him. He forgets about his son, and that indicates that perhaps he is over his grief more than he would like to think. Time has healed him, and made it so he can no longer grieve as he used to. Mr. Woodifield is the one who forces the boss to come to terms with his feelings. He is simply visiting his old friend and employer, when he recalls that he had something to tell him, however he could not remember what it was.

Feeling pity for the man who is “on his last pins,” the boss offers him a drink of whisky to help recall his memories, which Mr. Woodifield is successful in doing. However the memories are not pleasant ones for the boss. Mr. Woodifield informs him that his daughters went to visit his son Reggie’s grave, and happened to see the boss’ son there. They remark that the graves are well-kept and very nice. This brings up memories that the boss didn’t want to remember, and as soon as Mr. Woodifield had left, he asks his messenger to let no one bother him for a half hour. During this time the boss attempts to recall his feelings of grief for his son, and failing to do that he turns to the photograph, hoping that will help. A fly however falls into his inkwell and forces his attention towards it, coincidentally making him once again forget his son. He focuses on the fly and helps it out, then watching as it cleans itself. He decides that he will test the fly, and proceeds to drop ink onto it.

On the fourth drop the fly gives in, and the boss throws it away, just as he did with his memories of his son, which “For the life of him he could not remember.” Similes play a part in making the reader understand the story. For example when describing Mr. Woodifield using the simile “He peered out of the great, green leather arm-chair by his friend, the boss’s desk, as a baby peers out of its pram,” gives you the impression that Mr. Woodifield is perhaps getting on in age, and yet is still curious about everything that goes on around him. Another example is when Katherine talks about grief saying “we cling to our last pleasures as the tree clings to its last leaves,” meaning that the boss refused to let go of the grief, even though subconsciously he had already done so. The use of the metaphor “The day had come when Macey had handed him the telegram that brought the whole place crashing about his head,” forces the reader to imagine the boss’ feelings and reaction when he got the news about his son. He was devastated, and the metaphor used really enforces the point.

To further enforce the point of devastation and grief, imagery is used. The two major ones are the fly and the boss himself, however there is also the photograph on the wall. The boss represents all those who have lost someone in the terrible war, yet they kept a façade of being strong, and being the leader when in public, and when in private they were grieving their loved ones. He is a symbol of authority and power, keeping control when needed. The fly symbolizes those who lost their lives in the war. The young men who were shipped off to fight for their country, and who were getting more and more worn out the more years the war went on for. It symbolizes the constant struggle they had to deal with, and eventually they couldn’t handle it no more. Eventually the last inkblot killed the fly, just as the last year of war killed a lot of the remaining young men and their innocence.

The photo, while not mentioned as much, represents the innocence the young men had, and then lost in their first year of war. The things they had to do and see robbed them of the boyish innocence they went in with. “The expression was unnatural. It was cold, even stern-looking.” They all were changed by the horrendous happenings that they had to bear witness too. Overall this story sends out a message that everyone has their own way to grieve and everyone will spend different amounts of time doing so. Eventually however time will heal even the worst feelings of grief, and that is why I liked this story. It shows that no matter what things will get better one day. Things will get better, even if you don’t believe it ever will. Others should read this story, because at some time in their lives, they will have to face a challenge, and this story will remind them that time will help. They won’t overcome it straight away, but with time, they will get better. Just like Mr. Woodifield, and even the boss did. 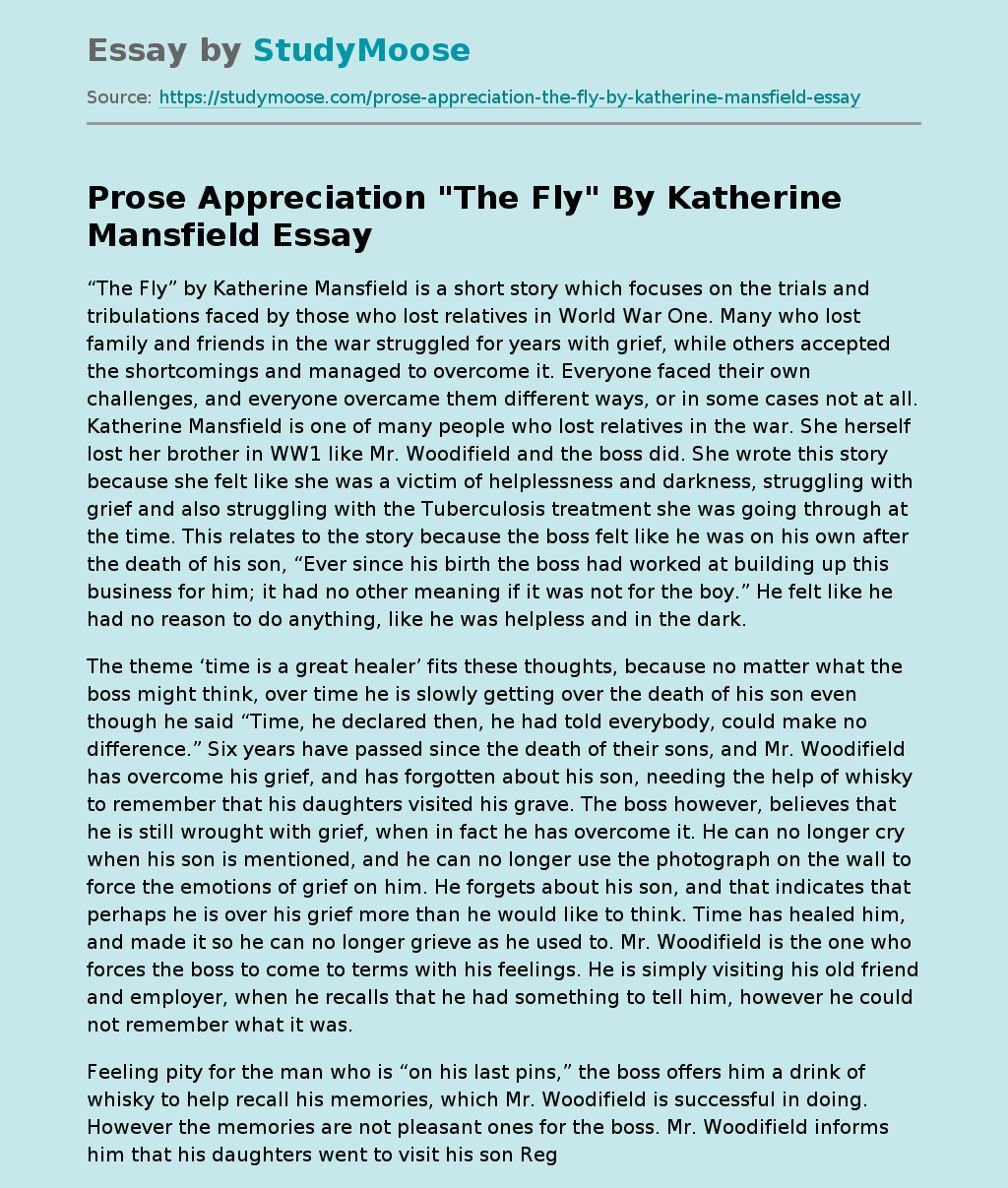