Pros and Cons of Social Networking

There are many different pros and cons of social networks. Social networks allow for easier communication and allow people to make new friends. However, these sites allow pedophiles to groom kids and allow for bullying.

Social Networking sites have allowed easier communication between family and friends. This means that instead of having to meet in a certain place to speak to your friends about school or what they are doing at the weekend, you would now be able to switch on your computer and go onto a social network such as Facebook or Twitter to do this.

Turn in your highest-quality paper
Get a qualified writer to help you with
“ Pros and Cons of Social Networking ”
Get high-quality paper
NEW! AI matching with writer

This reduces the chance of kidnappers of taking kids when they are walking to get their friends. This also reduces the amount of kids walking around the streets committing crimes.

Social Networks also remove the problem of speaking to someone on the other side of the world and someone who follows a different religion. Inserted of just speaking to people from the same area as you, people can now speak to people from America to Australia who has the same interests as you.

This allows people to make new friends and gives the world a more friendly society because more and more people are becoming friends across the world.

These sites are also very interactive so you are able to upload pictures or videos, so you can see what your friends and relatives are up to. These sites also allow messages to be sent and received, which allows people to keep in touch. For example people may not speak to family members to often but because of Facebook they are able to have a chat whenever they want which allows for a better family relationship.

These social networking sites can be taken advantage of by the wrong people. People could pass themselves as a sixteen year old girl but could actually be a forty year old man who is looking to take advantage of someone who will think they either know the person or they are the same age. As these pedophiles have the use of Google images or yahoo images they are able to post profile pictures of whatever or whoever they want and pass as that person. Even though we know this is happening there is no way to stop this unless social networking sites were shutdown. These people will often go for young kids and are able to receive dirty pictures because they tempt the kids into doing these things. If u make your page open to the whole world to view pedophiles will use this to their advantage and take any pictures or videos you have uploaded for their personal use.

Social Networks are also poorly censored. Kids, of a very young age, could end up downloading pornography or other unsuitable images. Kids will click on unsuitable images or videos but no warning will come up or something blocking people under a certain age to block this. However many people will lie about their age which will allow many very young kids the opportunity to view these unsuitable pictures.

“Trolling” is also a major issue with social networking sights. “Trolling” is when someone posts rude or nasty messages on someone’s online forum, chat room or memorial page just to receive and emotional response from the readers. Trolls get a buzz from doing this on people’s pages and receiving responses as they think it is funny and they just love the attention they get from sending these messages. As Twitter and Facebook got bigger and bigger more and more trolls began to appear ruining sites and making people very upset. As the issue of “trolling” got bigger and bigger the police became more involved and have started jailing people.

For example Sean Duffy, who wrote abusive messages on tribute pages for example a girl called Natasha MacBryde who was hit by a train. He also did this to many other pages. In the end he only received ninety weeks in jail. Like many trolls Duffy was unemployed and an alcoholic who spent his days sitting on social networking sites making people very upset. Even though we know “trolling” exists there is not much we can do to stoop it apart from not allowing people to view the tribute page or forum unless you know who they are.

Cyber bullying is the main problem of social networking sites. Cyber bullying is when someone is threatened, harassed or humiliated using social
networking sites, mobile phones or any other type of digital technology. Many people have either been cyber bullied of they have cyber bullied themselves. From the introduction of the big name social networks cyber bullying has become a very big problem. On sites such as Formspring people can post anonymous comments about people who they dislike which end up to people not wanting to leave there house or even committing suicide.

For example Phoebe Prince, an Irish immigrant in America, killed herself after three months of bullying because she was dating somebody who was older then her. She was bullied through text message and Facebook. She hung herself because of who she was dating. Cyber bullying is very common and will never be stopped due to lack of supervision on these websites.

In conclusion, social networking sites are have pros and cons but mostly cons. Even though these websites allow people to make lots of new friends they don’t actually know if the person they are talking to is actually who they say they are. Religions are able to mix but sometimes this is not a good thing. People will start posting racist comments and then arguments will start because someone follows Christianity but the person doesn’t like that religion so they become racist.

Pedophiles thrive on pictures being posted and they also love using things such as the Facebook chat system to their advantage. Trolls make peoples life’s, who has lost someone they love, a misery so they can feel better. Bullies get a kick out of being a coward and ruining someone else’s life because they have their own problems. Therefore social networking sights are not good for the world and cause more anger and hatred than people getting along.

Pros and Cons of Social Networking. (2016, Jun 10). Retrieved from https://studymoose.com/pros-and-cons-of-social-networking-essay 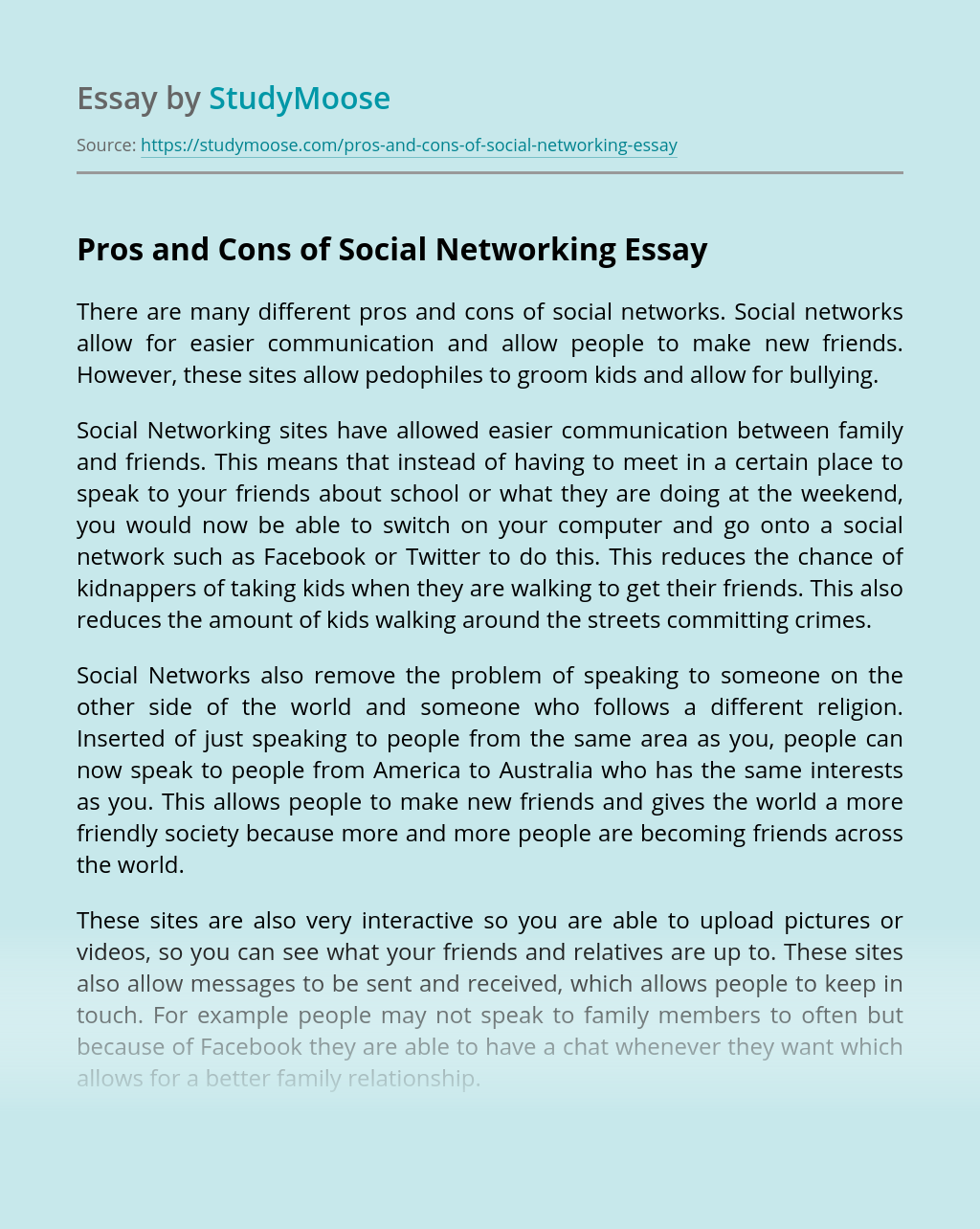 Turn in your highest-quality paper
Get a qualified writer to help you with
“ Pros and Cons of Social Networking ”
Get high-quality paper
Helping students since 2015
Stay Safe, Stay Original