Pros and Cons of Probation and Parole

1. What are the competing expectations for probation and parole are typically made scapegoats? Americans desire greater defense from criminal offense while insisting that efforts to afford this defense do not jeopardize treasured civil liberties. We want a system that discourages would be scalawags a disarms those not discouraged without enforcing considerable tax dollars.

Don't use plagiarized sources. Get your custom essay on
“ Pros and Cons of Probation and Parole ”
Get custom paper
NEW! smart matching with writer

5. Why can criminal justice in the United States be described as a system that is not systematic? There is a lack of joint preparation and budgeting, or perhaps methodical consultation, among the different agencies accountable for criminal justice.

7. Why can’t it be identified whether a probationer or parolee has been fixed up by the absence of a brand-new conviction? Think about that most reported crimes do not result in an arrest and conviction, futhermore, national criminal activity victimization studies expose that most criminal offenses are simply not reported to the authorities.

9. How did the classical idea of a social agreement challenge diverse justice? The disparate practices of meeting out justice were forcefully challenged in the eighteenth century with the advent of classicalism. During this age, theorists, such as Montesquieu and Voltaire, spoke out aganist the French chastening code and inhumane and ineqitable punishments. Jean Rousseau and Cesare Beccaria argued for an extreme idea of justice based upon equality.

At a time when laws and police were unjustified and disparate and penalties was frequently brultal, they demanded justice based on equality and punishment that was gentle and proportionate to the offense.

11. How does neoclassicalism in criminal justice differ from classicalism? classicalism argued that law should respect neither rank nor station-all men are created equal-and punishment should be meted out with a perfect uniformity and in proportion to the offense. Neoclassicalism differs from classicalism because it maintains the basic belief in free will while paving the way for entry of mitigation into criminal justice by considering three areas, past criminal record, insanity and retardation, and age. Punishment can be justified only if crime is freely chosen, intentional, and rational.

13. How does determinism conflict with the concept of punishment? Punishment can be justified only if crime is freely chosen, intentional, and rational. Determinism conflicts with this because determinism suggest a lack of choice, particularly the belief that one’s behavior is “determined” by physiological or psychological variables.

15. How does the standard of evidence in a criminal trial differ from that of a probation or parole revocation hearing? Every jury is told that the facts pointing to the guilt of the defendent must be established beyond reasonable doubt, as opposed to the preponderance of the evidence, which is the standard in the civil and some juvenile cases as well as probation and parole revocation hearings.

Pros and Cons of Probation and Parole. (2017, Jan 02). Retrieved from https://studymoose.com/pros-and-cons-of-probation-and-parole-essay 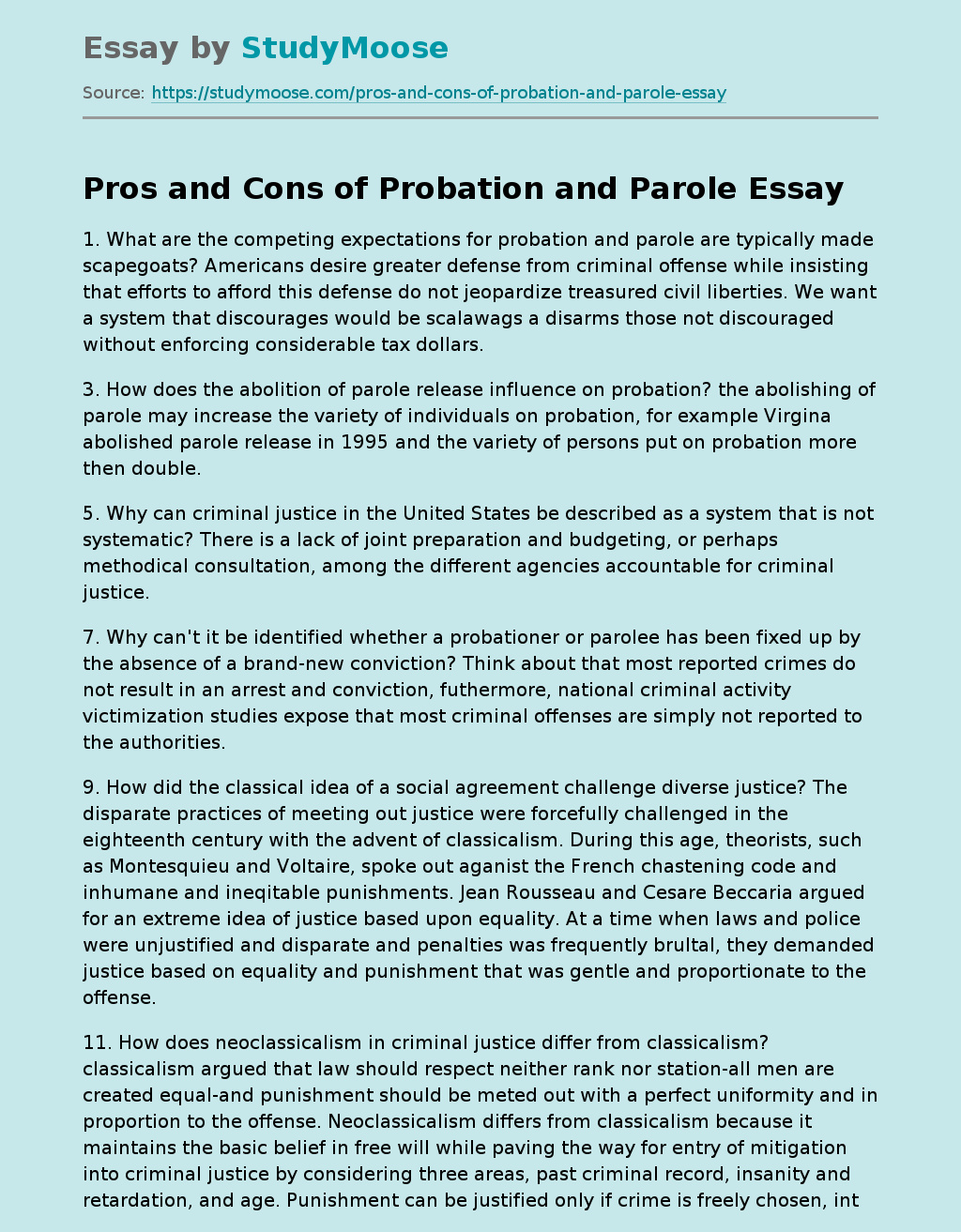