Pros and Cons of Mobile Phones

Mobile phones have become a hot commodity and have turned into a social norm. The introduction of smart phones has affected the way in which mobile phones are used and by whom. Due to mobile media, we are now able to communicate for free, watch movies on our phones, listen to music on the go and be currently updated with the latest news – all this information at the edge of our fingertips. However, this advancement in social media and technology has affected our values and culture, some good and some bad.

Turn in your highest-quality paper
Get a qualified writer to help you with
“ Pros and Cons of Mobile Phones ”
Get high-quality paper
NEW! AI matching with writer

Researchers and scientists have coined the term Mobilology, which is the study of mobile phones and how they affect human behavior, culture, education and economics. Mobile phones have altered social norms and values, and cultural progression.

They have made communication easy by enabling us decreased face to face interaction and meetings. Communication has become more impersonal, which contradicts the very use of communication (Rani, 2008). Children that grow up surrounded by mobile phones will eventually get used to impersonal communication and in the future, might find it hard to deal with simple day to day interaction (Rani).

Rani also stated how the Short Messaging Service has redefined communication in a sense that what constitutes for communication these days is a few words typed and sent to one or many recipients without emotion and verbal cues. Aside from making interactions between people less personal, SMS has also affected the written form of English language in which children now use.

Mobile phones have also led to the birth of a generation that prefer being alone, glued to their phones and being extremely introverted (Rani, 2008).

In our society currently, phones have become such a common device that most people feel exposed and isolated, feeling as if we are no longer able to communicate (Rogers, 2008). The art of conversation has become mobile, making mobile phones the lifeline to the outside world. Waiting and pesky overseas charges no longer apply as with the development of the Internet, there are now many applications that can be downloaded into the mobile phone to allow communication with people from all over the world. Calls and messages can now be sent for free, and all anyone needs is a wi-fi connection, and perhaps some of us treasure this connection more than we do with connections with our friends and family.

Mobile technology has paved a pathway to a society that’s always ‘on’ (Rani, 2008). Anyone is easily reachable at any time of day and place through their cell phones. The whole world, with over 7 billion people can connect to one another with just a flick of the finger or the keying in of numbers. Rani also wrote that this tool can come in handy during emergencies, as a person is able to get help at all times of day and night – probably saving his or her life. However, the use of mobile phones at inappropriate times for example while driving, in the cinema or in class has brought about some unwanted and unethical consequences.

Driving while using mobile phones has led to many cases of accidents and car crashes. Multitasking can prove to be quite a task, and not always an easy one – resulting in the driver not being able to concentrate on the road (Rani). Although there are many laws in most countries against talking on phones while controlling a vehicle, there are many of us who take this lightly and break it with ease. The social norms in classrooms have changed with the use of mobile phones. Students are sometimes more pre-occupied with the little screens on their fancy gadgets as opposed to doing what they are actually in school for – to learn (MIT Communications Forum, 2005). 41% of students say that the usage of phones in class to check messages should be allowed and only a 7% feel it is highly inappropriate to use phones in class at all while the teacher is conducting a class (MIT Communications Forum).

Next, the MIT Communications Forum also brought up the issue that the usage of cell phones in cinemas, museums, public transports and restaurants has a very thin line between being appropriate and inappropriate. This new culture of talking loudly on the phone in public places disrupts others who come to and particular venue to enjoy a quiet night out or to watch a movie in peace. Although there are no rules in black and white that prohibit the use of cell phones in these places, it comes without saying that these invisible ethical laws ought to be respected and obeyed.

In conclusion, we can see how mobile phones have changed our cultures in both good and bad ways. Although these devices have brought people from different parts of the world closer together, it does not mean it has not failed to alienate the people closest to us. As useful as mobile phones are, it is important to use them accordingly and not make them our lifeline to the outside world. Communication consists of verbal and non-verbal cues and this is what makes us feel close to one another, and measures should be taken to ensure this does not stop.

Pros and Cons of Mobile Phones. (2016, Apr 15). Retrieved from https://studymoose.com/pros-and-cons-of-mobile-phones-essay 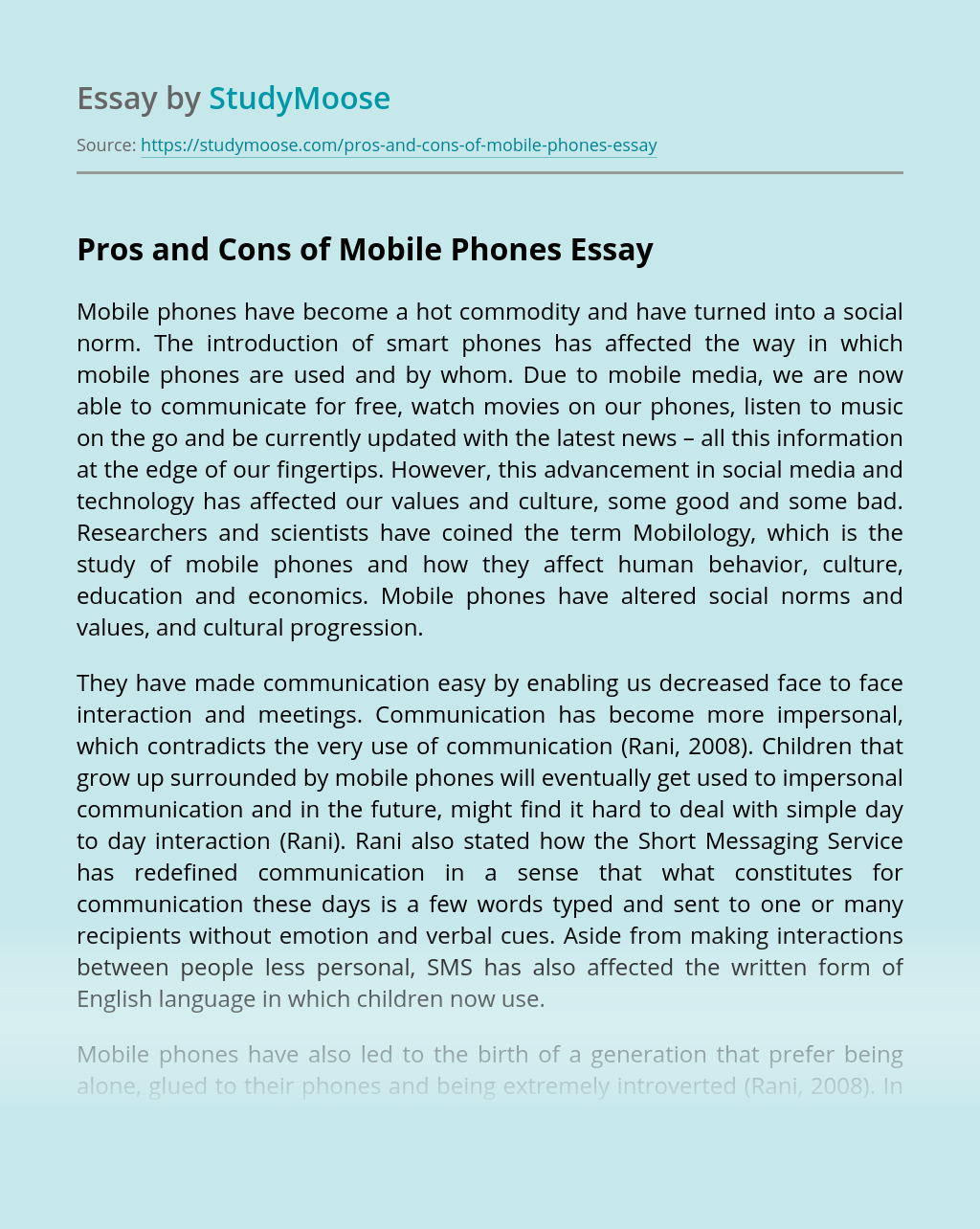 Turn in your highest-quality paper
Get a qualified writer to help you with
“ Pros and Cons of Mobile Phones ”
Get high-quality paper
Helping students since 2015
Stay Safe, Stay Original