Pros and Cons of Medical Marijuana

Don't use plagiarized sources. Get your custom essay on
“ Pros and Cons of Medical Marijuana ”
Get custom paper
NEW! smart matching with writer

It can help with Aids, Arthritis, Asthma, Autism, Cancer/Tumors, Crohn’s Disease / IBS, Depression / Mental Illness, Degenerative Diseases, Diabetes, Eating disorders, Epilepsy / Seizure Disorders / Glaucoma / Harm Reduction / intractable Breathlessness, Migraine, Multiple Sclerosis, Nausea, Obstetric Problems, Pain, Phantom Limb Pain, and PTSD. All of these symptoms and illnesses can be helped with the use of medical marijuana. The pros with having a Medical Marijuana card is that it is developed in different ways that you can use it.

You can use medical marijuana by drinking it, eating it, and smoking it. They have come out with different dosages for eating it, which falls into your requirement for the illness you have. Medical marijuana is one of those things that some people call a drug. Some people actually need it for their illness and would rather use it instead of popping a pain killer which has major side effects and can cause liver damage and also people can overdose which can be fatal. People argue and argue why it isn’t legal for everyone.

The reason for this is because it should be like it is today for medical use only and not for everybody because everybody shouldn’t do it. * There are some cons about medical marijuana. Marijuana makes your reaction time slow, you have a loss of memory, coordination is suppressed, and it damages your heart, lungs, and immune system. People that think marijuana has not damaged your body, well it has. Marijuana contains a lot of things that can damage your lungs and heart. Marijuana can raise your heart rate as much as 50 percent.

Users that use medical marijuana a lot can cause irritation to there lungs and respiratory airways. Even though medical marijuana has not been proven to cause lung cancer it contains cancer causing chemicals which are known as polycyclic aromatic hydrocarbons. Marijuana triggers a short-term drop in the hormones that direct growth and development which can make people shorter. It also lowers sperm production in males which results in fewer normal sperm cells that can cause a deformed baby. Medical marijuana also causes memory loss and over the years of using it can result in major memory loss.

There are some pros and cons of medical marijuana and the way that the government has set up the use of it is the correct way. Marijuana should not be legal for everyone’s use. The only reason why they didn’t make marijuana legal is because of the affects it has on our bodys and working people that don’t suffer from any illness should not be using marijuana. If everybody was using marijuana our country wouldn’t be were it is today and everybody would be lazy and would not think clearly. Medical marijuana is good for people that have an illness and refuse to take pain killers.

Pros and Cons of Medical Marijuana. (2016, Dec 21). Retrieved from https://studymoose.com/pros-and-cons-of-medical-marijuana-essay 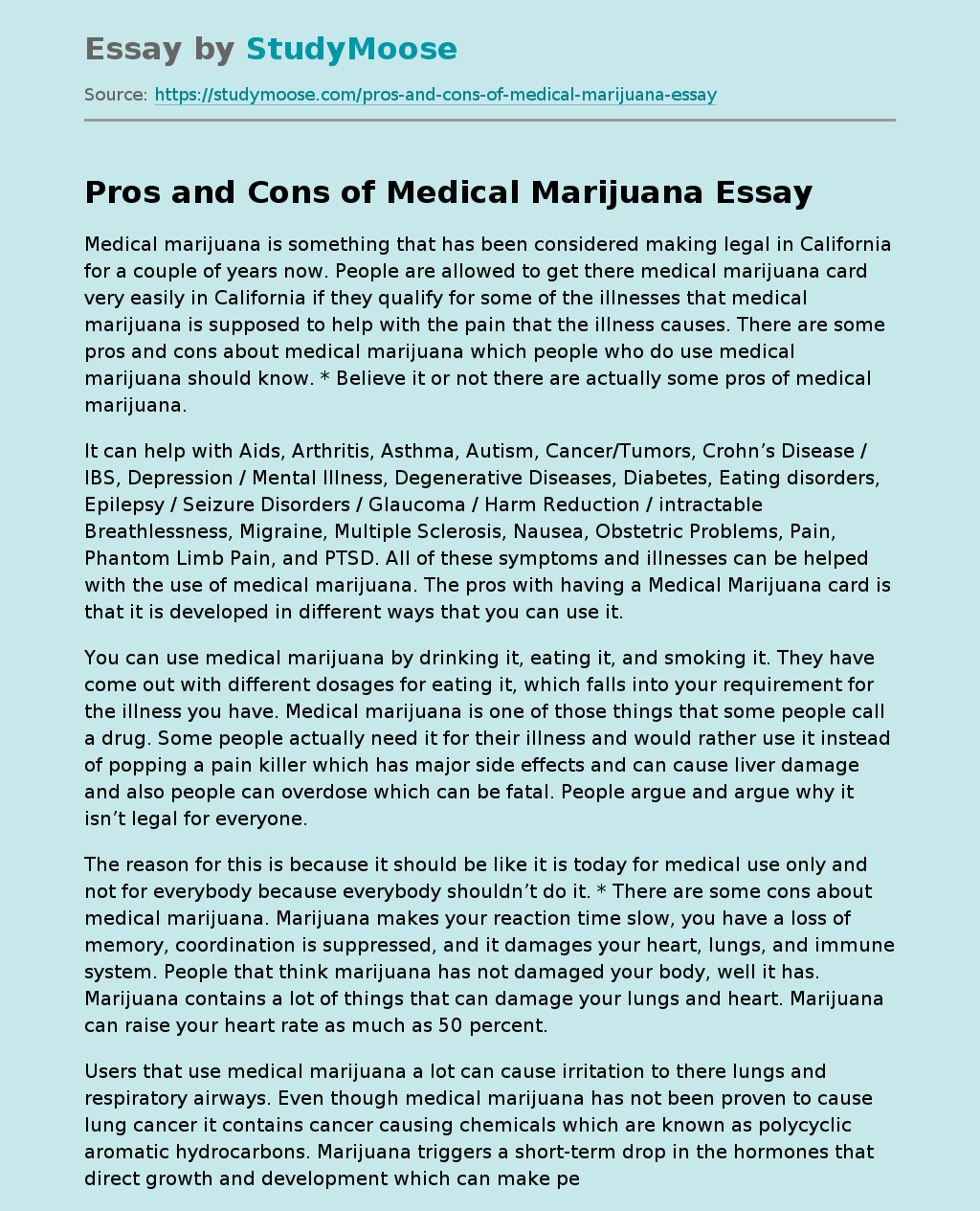