Pros and Cons of Green Revolution in India

The green revolution was a stage when the productivity of global agriculture increased considerably as a result of new advances. It has taken the place in 1950 to 1960 in developed country. The main reason to start the green revolution is that food shortage. Most of the people in India they are depending on the agriculture. If the climate helps the formers in the sector of the monsoon and all then only the production will increase in our country.

Don't use plagiarized sources. Get your custom essay on
“ Pros and Cons of Green Revolution in India ”
Get custom paper
NEW! smart matching with writer

Because failure of the crops agriculture production decreased and price become high. So less production leads the food shortage. This progress referred the green revolution to overcome the problem. In that time indira gandhi was the prime minister who nationalised 14 major indian banks and the green revolution in india highly developed agriculture. Swaminathan is well-known as the ‘father of indian green revolution’ for his leadership and success in introducing and further developing high-yielding varieties of wheat in india. He was leading role in india’s green revolution, a program under which high-yield varieties of wheat and rice seedlings were planted in the fields of poor farmers and new methods of cultivation, including mechanization.

Proficient in: Green Revolution In India

The chemical fertilizers made it possible to supply crops with extra nutrients and, therefore, increase yield. In addition to the chemical advances utilized during this time period, high-yield crops were also developed and introduced. High-yield crops are crops that are specifically designed to produce more overall yield. A method known as multiple cropping was also implemented during the green revolution and lead to higher productivity.

Multiple cropping is when a field is used to grow two or more crops throughout the year, so that the field constantly has something growing on it. All of these together were seen as a ‘package of practices’ to supersede ‘traditional’ technology to modern industrial one. The newly developed synthetic herbicides and pesticides controlled weeds, deterred or kill insects, and prevented diseases, which also resulted in higher productivity. As a result of the green revolution the agricultural industry was able to produce much larger quantities of food. This increase in productivity made it possible to feed the growing human population.

green revolution has brought agriculture to a huge scale. Many people was depending on the agriculture and after adopting the new modern method we can see the crops that were grown on a very big and only those that require extensive manual intervention to grow healthy. To do this farming not an easy and still people were adopted the modern method and successfully using the green revolution.

Earlier whatever farmers producing thats eaten by rats and whole. So this green revolution has given to us is the ability to give crops resistance to pests and herbicides. In the past, developing economies, which were still adapting to technology and did not have very high literacy rates, struggled with farming. Now that green revolution is here, this has changed, not only leading to more produce, but also making it healthier.

Earlier formers use to planting again and again same plan without follow the land situation. Because of the technology they started to test the land and adopted new methods in their agriculture. Some crops still having the value in market. so crop has made sufficient with green revolution.

Green revolution had the main challenge about multi cropping and all. Its become successful in that area. It make the possible that people can grow the any crop in anywhere.

Yes, its true. Because of the modern technology farmers can grow the more crops and also multi crops in same time and same place. It’s the one of the profitable method and also it will develop the agriculture industry.

mono culture is one of the good thing in agriculture as well as bad because in the same place if we are growing the same crop in every year , nutrition level will go down and soil level will become the week. And also this kind of agriculture needs more water and fertilizer. This is difficult to the small farmers.

Because of too much cultivation of crops and multiple crops it may create dangerous to the farmers. More crops will help to grow the pests and weeds. It many create the developmental hazards to the crops.

In the case of the seeds we can its most important thing to produce more. When people started to do multiple cropping there will be lack of seeds. And because of the pesticides and all seeds will generate the sterile seeds every year by year.

For this perfect example is that in drought area people are growing more water consuming plants. Green revolution only considering the using modern technology in agriculture likes fertilizer and all. This is perfect to some soil only. People are giving more preference to cash crop rather than soil. So this is one of the requirements to produce the good seeds with help of soil. It is not ensure in the case of green revolution.

in rural india mainly small farmers are more depending on the agriculture. So because of the green revolution they started the multiple crops and using equipments. Thing is that it may be the high cost which small formers ant afford. People are doing agriculture to full fill their own needs. Agriculture things are high means they can’t afford and they will follow the traditional agriculture.

green revolution change the whole agriculture sector means people have started to depend on the cash crops and they adopted the modern technology which can increase the production as well as supply. But the thing is that farmers are focused the more cash crops so which place is not suitable for crops then also they started to grow the same crop in same place (ex: in Maharashtra they stared to grow the sugarcane) because of soil and land problem crops are not that much grown which formers are expecting so it leads the shortage of supply.

Because of the green revolution people have started to use new technology to grow high and earn the good value to their production. Earlier people use to harvest the land using the people and using the animals to do agricultural work. But these days because of the green revolution they started to use the equipments which are harm to the soil or land. It may lead the environmental harm. And also whichever fertilizer or pesticide farmers are using its leading the much decease and its harm to the society also. It is the unsustainable method which formers are using in these days.

Pros and Cons of Green Revolution in India. (2021, Mar 05). Retrieved from https://studymoose.com/pros-and-cons-of-green-revolution-in-india-essay 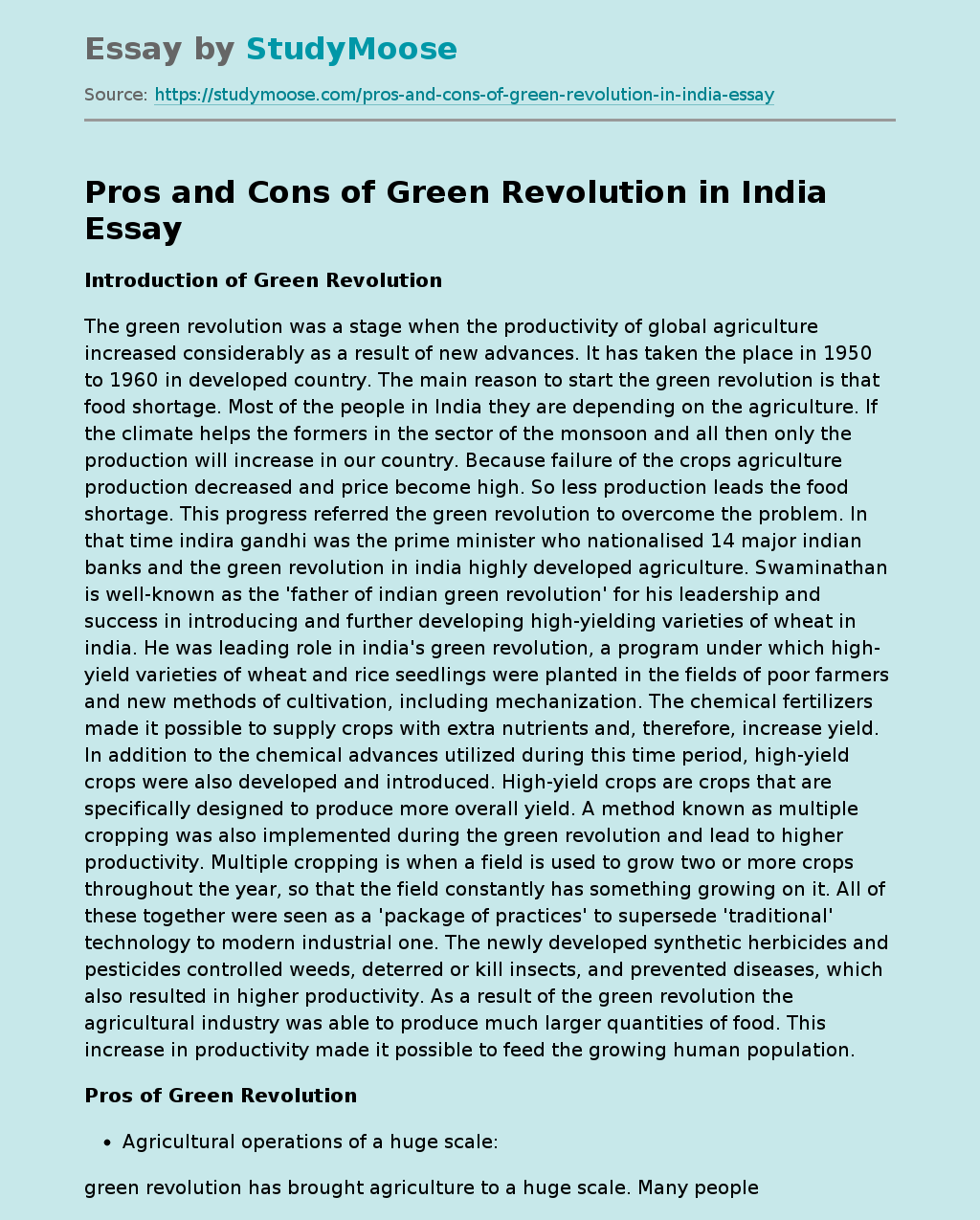