Pros and Cons of Genetic Engineering

With the discovery of DNA and unravelling the genetic code it contains, molecular biologists have finally come close to understanding what determines the form and function of organisms and can use this to design organisms at will. This is illustrated by the experiments on the transgenic fruit fly which has eyes on its antennae (Walter Gehring, Basel Biocentre, Switzerland. see the year 1994 in http://www.ifgene.org/history.htm ). This new technology will have more benefits for human existence than all the past technologies put together.

Don't use plagiarized sources. Get your custom essay on
“ Pros and Cons of Genetic Engineering ”
Get custom paper
NEW! smart matching with writer

|Scientists are no closer to understanding what determines the form and function of a living organism than they were a century ago before the term gene was coined. As Craig Venter, a leader in the Human Genome Project put it: “We know shit about biology”. Scientists have tended to concentrate on physical causality — genes determine form and function — but they are looking in the wrong place. Genes and their proper expression as structural, regulatory or enzymic proteins are merely one of the necessary conditions for the idea underlying an organism to manifest.

The essence of the organism is its entelechy or telos. Other necessary conditions for an organism to manifest include nutrient, water, warmth, light and many other factors to do with the earth as a planet in a cosmos. The optimistic predictions of the molecular biologists and genetic engineers is reminiscent of those offered by the early proponents of nuclear power. In the 1950s, electricity was forecast to become too cheap to make it worth metering, but the reality is that society is left with a legacy of nuclear waste the cost of dealing with which will place an immeasurable burden on future generations.

| Ever since agriculture and the domestication of animals and plants began, man has been modifying their genetic make-up by selective breeding (e.g. broccoli, Brussels sprouts and cabbage came from a single species of mustard). |Traditional breeding involves gene exchange in the proper context within which they function with all the checks and balances of the biological processes of the organism itself and of the organism’s normal interaction with its environment. GE is out of context. GMOs often behave very differently when taken from the laboratory, greenhouse or field trial situation into the real-life context where they will be used, e.g. a gene for red flowers was inserted into a white petunia. The petunia turned
red but also produced more leaves and shoots, had lower fertility and was more resistant to fungi. None of these additional effects was predicted. Over 90% of transgenic plants are discarded during the development process, most even before the plants leave the laboratory. The reason for so many rejects is because they do not express the desired gene or they are made unhealthy by the genetic engineering. | Ever since man began to ferment fruit and milk products thousands of years ago, he has been using biotechnology.|Traditional biotechnology uses natural organisms in contexts to which they are adapted whereas GE creates completely new genetic make-ups that could never have come about by natural processes.| All attempts to define what species barriers are have so far had various shortcomings. The genomes of many organisms can be shown to contain gene sequences from totally unrelated organisms which might commonly be assumed to be on the other side of a ‘species barrier’ (e.g. the mariner sequence in the fruit fly Drosophila, is also in humans). Mules (horse x donkey) have long since existed, but nobody is complaining and the technique of grafting different plants/trees onto each other is ancient.|GE crosses species barriers. Crosses are made which would never occur in nature.| All technology is unnatural (unless we hold that man and all his creations are part of the totality of nature). (see Shakespeare, A Winter’s Tale, IV:III:82-103)|GE is unnatural. |

We have consciously interfered with evolution through breeding, habitat management and even selection of our own spouses for millennia without any noticeable dire consequences.|Scrambling genomes will lead to total chaos in evolution.| “And God said, Let us make man in our image, after our likeness: and let them have dominion over the fish of the sea, and over the fowl of the air, and over the cattle, and over all the earth, and over every creeping thing that creepeth upon the earth.” (Genesis 1:26)”Human beings are themselves part of nature, creatures within creation. Human discovery and invention can be thought of as resulting from the exercise of God-given powers of mind and reason.” (Church of England Board)|Biotechnologists are playing God.| GE is a very precise way of introducing desirable traits into economically useful organisms. The techniques are improving all the time and it is increasingly possible to insert genes at a precise locus in the host organism’s genome. This is called ‘gene targeting’.|GE disrupts the integrity of the recipient genome
with unpredictable side effects including ‘gene silencing’ both of the inserted gene and other unrelated genes in the organism. GE cannot readily control the number of copies of the gene that are inserted into the host, nor where in the genome they will end up. Inserted genes can disrupt the function of existing genes in ways, which may not show up until later generations.| GE often, but not always, needs to use bacteria, viruses or plasmids as vectors to shuttle the genes of interest into the target organisms. Having the parts of their genomes removed that would make them infective cripples these vectors. As the technology improves it becomes less necessary to use infective agents as vectors.|GE makes use of pathogenic organisms such as viruses and bacteria as vectors of the gene that is being transferred. In other words, the target organism has to be made ill just to get the gene in, sometimes with tragic consequences.

The pathogens can kill the target organism or could spread into the environment with unpredictable and dangerous consequences. Even crippled vectors can recombine DNA and therefore genes with their normal counterparts in their surroundings and thus suddenly and unpredictably become infective. | Molecular biologists acknowledge that they are only modifying one aspect of an organism’s totality. However, they examine the organisms produced in detail, sometimes taking them through breeding programs for years to be sure that they are behaving in the way that other normal members of the same species behave which have not had the genetic modification. |The reductionist thinking of genetic determinism, which believes that the genetic make-up is what makes the organism what it is, dominates GE. An organism is as much an expression of its environment as it is of its genes. Concentrating on the genes, therefore, is one-sided. Furthermore, the organisation within a cell and its interaction with other cells is also inherited along with the genes. An organism is as dependent for its survival as much on these epigenetic factors as on its genome. | The fact that horizontal gene transfer occurs all the time in nature, (e.g. the constant exchange of genetic information between bacteria, viruses etc, or the rarer ‘jumps’ of genes such as may have contributed to the ubiquity of the mariner sequence listed above) and has caused no problems, can be taken as evidence that it poses no serious danger.|GE exposes people to the increased dangers of horizontal gene transfer, a process whereby genes are passed not ‘vertically’ down the generations in the usual way but ‘horizontally’ from organism to organism and from species to species. | Enzymes can be produced from GM microorganisms for use in industrial processes including food manufacture.|Industrial enzymes used in anything from washing powders to food processing are already a major source of allergies.| GE does involve some risk taking but all procedures are subject to strict risk analysis and monitoring. The risk is therefore minimal. No popular technology is without risk, e.g. the motorcar that kills tens of thousands each year.|GE is potentially dangerous and therefore involves taking risks. The consequences could be devastating and irreversible. Furthermore, the adverse consequences could take years to show and the company liable for any damages may have long since ceased trading.|

Pros and Cons of Genetic Engineering. (2016, Apr 02). Retrieved from https://studymoose.com/pros-and-cons-of-genetic-engineering-essay 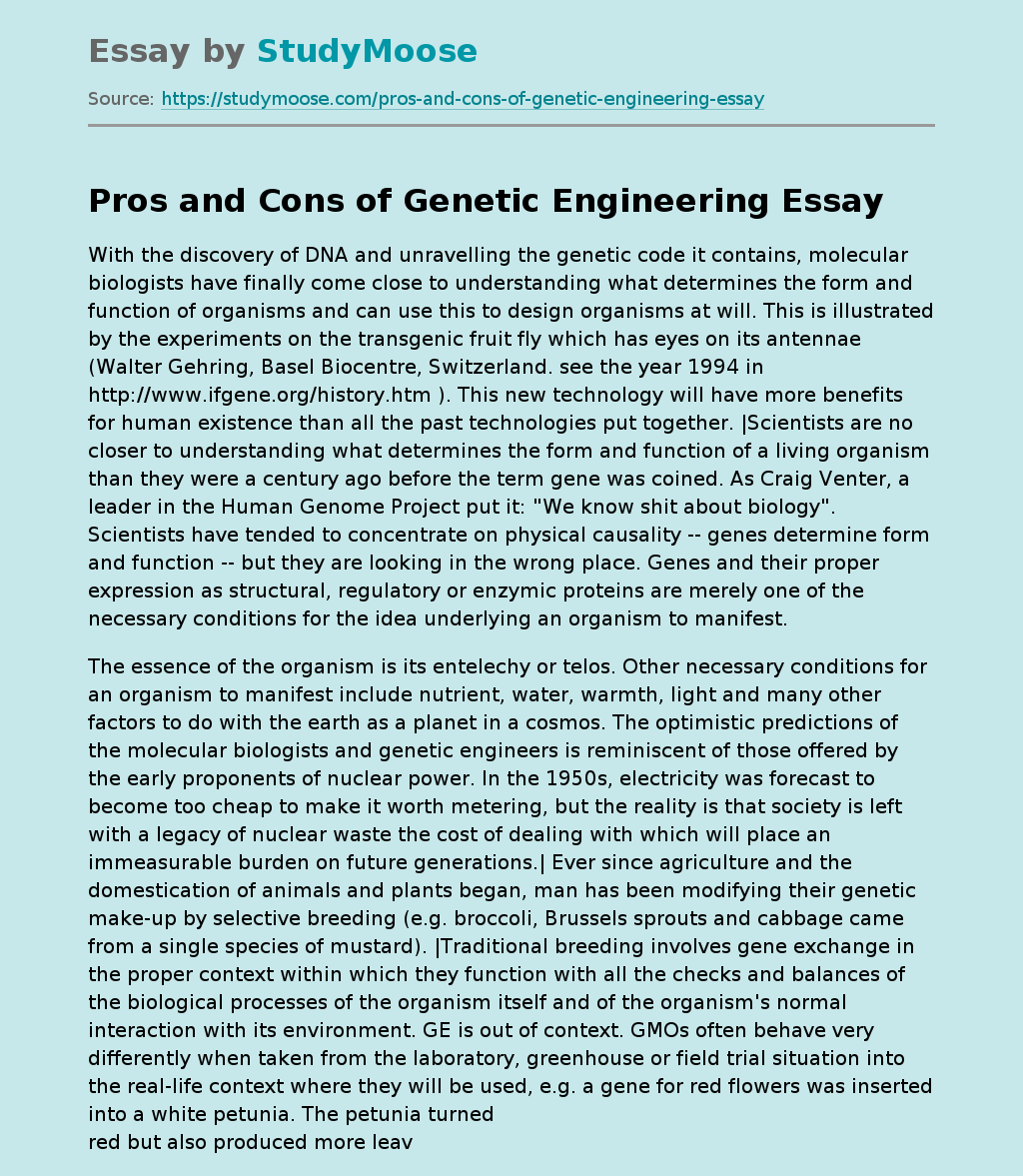