Vigilance makes preparedness to be watchful always and sense the happening around oneself. People always have wrong approach towards vigilance as they perceive vigilance as enquiry, fixing responsibility etc. Vigilance is not investigation but it is prevention. To punish and not to prevent is like pumping the water through a pump without arresting the leakages which result in wastage of water, energy and time. Why do organizations need vigilance:-

An organization protects itself from external dangers through creating security and posting manpower to guard against such threats.

The role of vigilance is to protect organization from internal dangers which are more serious than external threats. Responsibility of Employees in Vigilance Matters:

Vigilance officer should be own officer;All men are vigilance people-raising awareness level. Vigilance very essential ; All officers should work for the same target/goal.

Vigilance is not confined to a particular individual or set up. All public servants should be honest. They also have a responsibility towards the nation to help the organization to discharge vigilance functions effectively by bringing to the notice of organization about the activities of dishonest employees.

Vigilance means watchfullness or to bring awareness. Vigilance came into existence mainly for the purpose of fighting corruption. Corruption involves misuse of power , money ,government property etc. Though corruption can’t be brought down to zero level, we can try to bring it as low as possible. This can be ensured by watchfulness, caution and vigilance. Or in other words it can be achieved by E-Governance.

Corruption is anti national, anti poor and anti economic development. According to the UNDP Report on Human Development 1999 on South Asia, if the corruption level in India goes down to that of Scandinavian Countries, the GDP will grow by 1.5% and Foreign Direct Investment will go up by 12%. Corruption is anti poor because nearly 30% of the food grains and sugar meant for the public distribution system disappear in the black market. Corruption literally takes away the food from the mouths of the poor people for whom food security by way of the public distribution systems is devised by the government. Corruption is anti national as revealed by the Bombay blasts of 1993 when the customs officials who were bribed permitted the smuggling of the RDX which resulted in the death of 300 people. M/s Transparency International, a Berlin based non-government organisation has ranked India 73 out of 99 countries in the Corruption Perception Index. This refers to the perception of the degree of corruption as seen by business people, risk analysts and the general public. It ranges from 10 (highly clean) to zero (highly corrupt). Denmark appears at the top of the list with a score of 10 and India figures at 73 with a score of 2.9.

Fighting corruption is too important an activity to be left only to the Central Vigilance Commission. The Commission therefore proposes to launch a systematic campaign against corruption by involving all members of the civil society in fighting this social evil. The first step in this campaign is to educate the people about the dangers of corruption and sensitize them about
the evil consequences of corruption.

In recent times many scams such as 2G, COLGATE, Procurement of Tatra Trucks and allocation of defence spectrum by ISRO has rocked the country. The spread and magnitude of the amount involved indicates that the corruption is deeply rooted in our democracy.

Widespread corruption cannot be rooted out “just by 300 people sitting in the CVC but each and every citizen of the country must contribute towards building a TEAM India where T stands for technology and transparency,

E for efficiency and empowerment,
A for audit trail and accountability and
M for metrics measurement and mutual cooperation,”
After the move by the Civil Society led by Anna Hazare the awakened citizens might ask from themselves what is it that I can do to check corruption in my country instead of merely expecting that somebody else can do something to check corruption. CVC Approach

At the individual level, there are adequate resources available for any concerned citizen to play a role in checking corruption. 1. Right to Information Act 2005.
Lokpal bill

E-Governance is the use of various modern information and communication technologies such as internet, local area networks, mobile phones,etc., by the government to promote democracy and minimize the corruption level. Simply e-governance is electronic management and electronic controllership. Therefore vigilance and e-governance are required for ensuring corruptionless functioning of any private, public or government organisation.

In order to achieve this purpose, govenment has implemented various online services under national e-governance plan like property registration, railway reservation, pensions, passport, visa , company affairs, land records, e-courts, etc.Here we will discuss some of the examples and we will see how they are proven to be effective, not only for fighting against corruption but also for improving the efficiency, effectiveness and comfortness of public.

Following are the examples of online service under National E-Governance Plan Income Tax A. Central Excise

Here we will discuss some examples and we will see how they are proven effective tools of vigilance for not only fighting against corruption but also improving effectiveness, efficiency and comfortness of public.

Previously(i.e. Before the computerization of The Department of Revenue in Karnataka), farmers had to seek out the Village Accountant to get a copy of the Record of Rights, Tenancy and Crops (RTC) — a document needed for many tasks such as obtaining bank loans. There were delays and harassment. Bribes had to be paid.

Land owners find it difficult to access the Village Accountant, as his duties entail traveling. The time taken by Village Accountants to provide RTCs has ranged from 3 to 30 days depending upon the importance of the record for the farmer and the size of the bribe. A typical bribe for a certificate could range from Rs.100 to Rs.2000. If some details were to be written in an ambiguous fashion, out of selfish motives, the bribe could go up to Rs.10,000. Land records in the custody of Village Accountant were not open for public scrutiny.

But Now (i.e. after the computerization of The Department of Revenue in Karnataka) for a fee of Rs.15, a printed copy of the RTC can be obtained online at computerized land record kiosks (Bhoomi centers) in 140 taluk offices. Without delaying and any bribe.

The Bhoomi software incorporates the bio-logon metrics system, which authenticates all users of the software using their fingerprint. A log is maintained of all transactions in a session. This makes an officer accountable for his decisions and actions. The government also has plans to web-enable the database to make available to the farmer a copy of the land record locally through an Internet kiosk — although without signature such a copy will only have an informative value.

This scheme also useful for preventing lands-scam Due to availability of all the data related to land is at a common server.

Gujarat has an extensive road network, which carries a large volume of commercial traffic. Major highway systems link Dehli to Mumbai and provide the principal link to the Kandla sea port on Gujarat’s west coast. Gujarat’s 10 check posts are positioned at the border with three neighboring Indian states. Nearly 25,000 transport vehicles enter daily through these check posts. Trucking companies want to maximize their earnings from each vehicle. Often this has prompted transporters to load their trucks beyond permissible axle load, creating a serious safety hazard. Previously (i.e. before the computerization), a suspect vehicle is flagged to a stop, and then weighed on a weigh bridge located away from traffic. The legal penalty for overload is Rs 2,000 per ton. However, any fine often has been (illegally) negotiated

The problem of corruption was particularly difficult to attack as the corrupt were backed by politicians. In the absence of any systematic inspection of vehicles, the transport companies also adopted various illegal practices. Duplicate copies of a single registration book from the Regional Transport Office (RTO) have been used for many different vehicles, using fake license plates.

In the computerized process, all the check posts are monitored at a central location using video cameras installed at every check post cabin. The video camera captures the registration number of all trucks approaching the check post. (There are flood-lights and traffic lights which make the check posts appear like a runway at night.) Software converts the video image of the registration number to a digital form and the details of the truck are accessed from a central data base. An electronic weigh bridge captures the weight and the computer issues a demand note for fine, automatically.

Through the use of computers and other electronic devices at 10 remote interstate border check posts in Gujarat, India, a team of savvy public officials have reduced corruption and significantly increased the state’s tax revenue.

Before the computerization system it was very difficult to know the availability of seat and getting reservation without paying additional money. Passenger has to pay additional money inside the train also.

But after computerization availability of seat are known to all also passenger can himself book ticket online, it reduces the money handling (dealing) in other words we can say its reducing the corruption. Also auto up gradation of passenger tickets increases the revenue to Indian railways and decreases the additional income (bribe) to TTC.

This software is intensively used in all type of industry to monitor the work progress of company/ section/ individual. This is not directly relate with money corruption but it is dealing with monitoring corruption which include delaying of projects/works which leads to increase hidden cost of company also leads to inefficient work.

Now we can say vigilance and e governance are complementary to each other. To prevent or minimize the corruption we have to have transparent system which can be achieve by deploying E-governance in all sector and everywhere. But the biggest challenge of deploying e-governance is not technology but change management. Change management is important not only in terms of cultural change but also in terms of changing operations and processes workflow that the automated environment will introduce. “E-governance, however, is not really the use of IT in governance but as a tool to ensure good governance. E-governance does not mean proliferation of computers and accessories; it is basically a political decision which calls for discipline, attitudinal change in officers and employees, and massive government process re-engineering 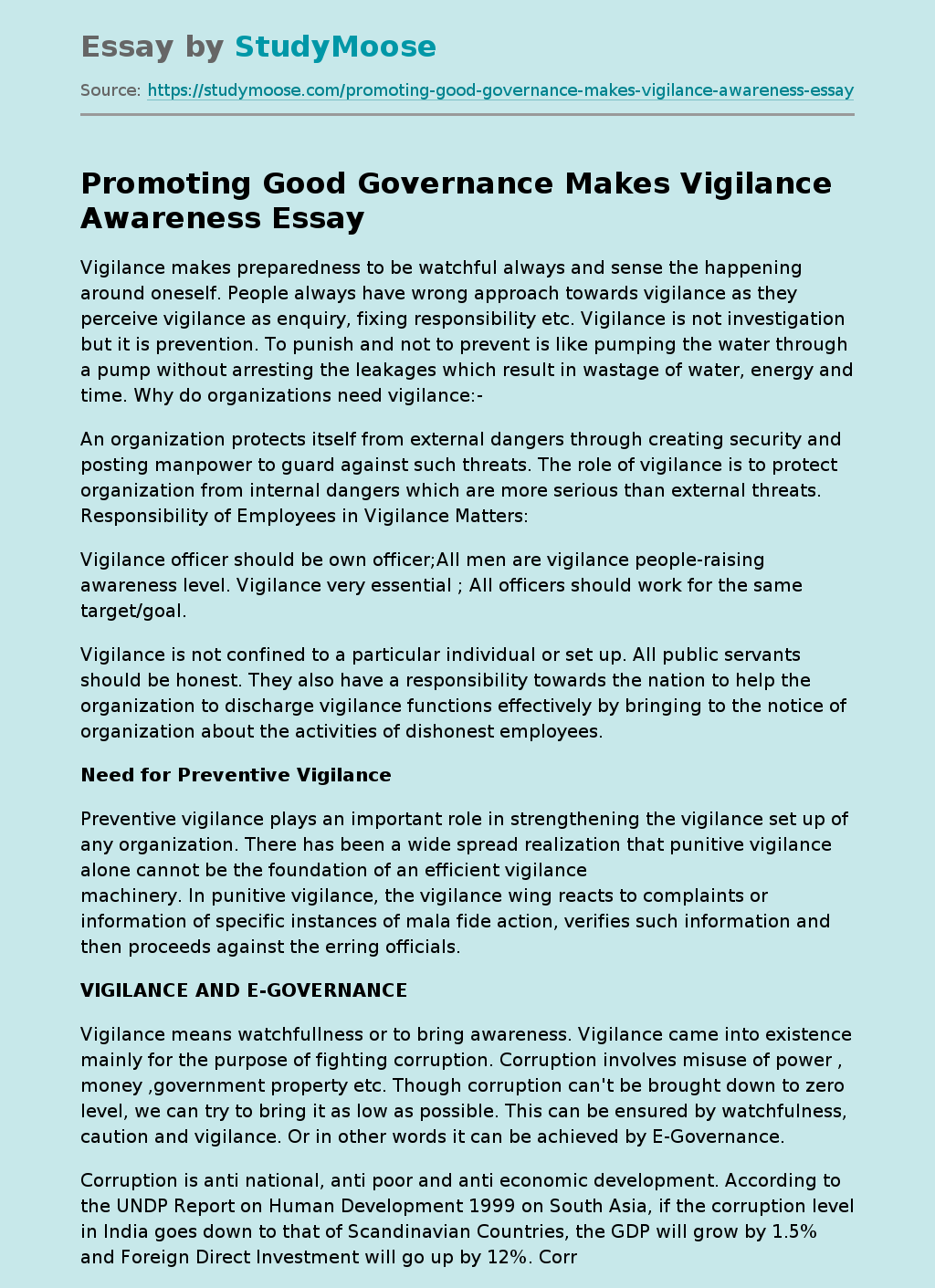