Alcoholism is the excessive and usually uncontrollable use of alcoholic drinks. There are many symptoms, complications, treatments and ways of prevention for alcoholism. Certain groups of people may be at a greater risk than others for several different reasons. There are numerous factors in why people may become addicted. Usually, a variety of factors contribute to the development of alcoholism. Social factors such as the influence of peers, family, society, the availability of alcohol, mental illness, stress, and not knowing how to cope with certain situations.

Don't use plagiarized sources. Get your custom essay on
“ Promoting Alcohol on Tv ”
Get custom paper
NEW! smart matching with writer

It’s a common thing for an alcoholic to think drinking is the answer to all their problems, but in retrospect drinking is only adding to the multiple complications caused by being a compulsive drinker. Research has been done to explore the reason behind why people drink. However, “Exactly how alcohol affects the brain and the likelihood of reversing the impact of heavy drinking on the brain remain hot topics in alcohol research today. ” (NIAAA) The effects of alcoholism have been divided into groups.

There are physical effects, psychological effects and effects that contribute to many other health, safety, social and econimical problems.

Some physical effects of excessively drinking alcohol can be extremely serious, or even fatal. One physical effect of alcoholism is causing cancer in the liver, kidney and stomach. Alcohol abuse is the leading factor to developing Cirrhosis of the liver. Alcohol related Cirrhosis usually develops after more then almost a decade of heavy drinking, but for some it may develop quicker; all depending on how your body reacts to alcohol.

“In cirrhosis of the liver, scar tissue replaces normal, healthy tissue, blocking the flow of blood through the organ and preventing it from working as it should.

Cirrhosis is the twelfth leading cause of death by disease, killing about 26,000 people each year. ” Another physical effect of alcoholism is the altering of nutrients digestions which your body needs in order to remain healthy. Another physical damage that alcohol abuse brings is damaging of the neurons and thereby causing body movement alterations, depression and loss of appetite. Since drinking too much alcohol can raise some fats in the blood, that means it can also lead to high blood pressure, heart failure, and increased calorie intake which could lead to the development of diabetes.

Some symptoms of Fetal Alcohol Syndrome may include premature birth weight, developmental delay, learning difficulties, and behavioral problems. Alcoholism also causes psychological effects as it changes your normal behavior and this is when you feel anxious and become depressed. Other psychological effects of alcoholism include violence, suicide, family and legal problems. Alcohol abuse can also cause economic effects. This is because getting an alcoholic drink is not cheap. If you drink several drinks on a daily basis you will definitely notice that you are spending a lot of money that can be used for other important stuff.

An alarming amount of accidents, crimes and suicides, are the result of alcohol abuse by one or more family members. The latest death statistics released by the National Highway Traffic Safety Administration (NHTSA), In the United States, in 2010, more than 10,000 people died in alcohol-impaired driving crashes. That is equivalent to one every 51 minutes. Alcohol-impaired motor vehicle crashes cost more than an estimated $37 billion annually. These statistics are avoidable by not abusing alcohol or drinking in an environment that puts others at risk of becoming a statistic.

Alcoholism is just as damaging to family members as it is to the alcoholic. Adult Children of Alcoholics often are in denial that their problems come from there parents or parent being an alcoholic. Many of them have severe problems with depression, aggression, or impulsive behavior. Most children of alcoholics make poor career choices and aren’t capable of being responsible parents, because they weren’t raised correctly themselves. Due to the large amount of money spent on alcohol and also possible joblessness the family may have to give up certain privileges that a non-alcoholic family wouldn’t.

Being an alcoholic can totally disrupt family life and cause harmful effects that can last a lifetime. Thousands of alcoholics are helped to stop drinking every year. The chances of recovery are good if alcohol abuse or alcoholism is treated in its early or middle stages. Unfortunately, most alcoholics do not receive treatment therefore; over 90 percent of them will die as a result of their alcoholism. On the more positive side about 700,000 Americans receive alcoholism treatment on any given day. However, the techniques of alcoholism therapy only work if the patient is ready to seek help.

One of the most traditional ways for an alcoholic to seek treatment is through the Alcoholic Anonymous 12 step program. Other then AA, there are many different programs available to help a person trying to seek recovery. Alcoholism is a disease that could consume ones life, but with support and treatment, many individuals are able to stop drinking and rebuild their lives. 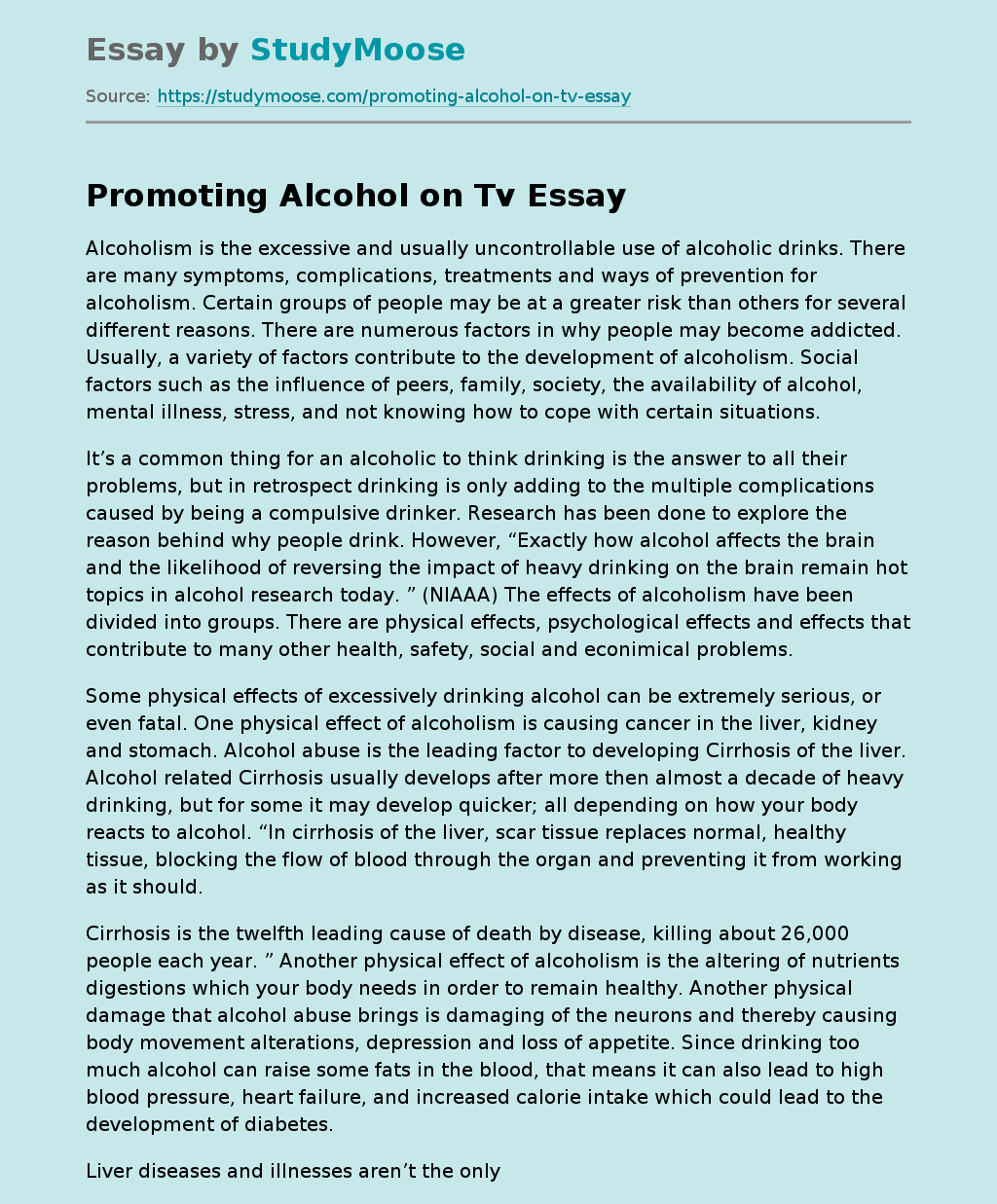