Progress is not something that comes very quickly. It is a gradual process that takes time, in the interest of our country and the Progressive Era, more than a decade. The presidents of this time, Roosevelt, Taft, and Wilson, were like chefs developing a recipe for the betterment of the United States. Every act that was passed, each decision that was made, was a trial or taste-test of the constantly changing recipe for the country. If something angered citizens or drew criticism, the president went back to his office, his kitchen, and was ready to make more changes.

Don't use plagiarized sources. Get your custom essay on
“ Progressive Presidents of USA Roosevelt, Taft and Wilson ”
Get custom paper
NEW! smart matching with writer

Where he left off in the progressive recipe, the next chef took over.

He would analyze what had been done, identified his plan of action, and then set to work by either making a few alterations or starting anew. This in effect was what Roosevelt, Taft, and Wilson did. They each had differing opinions about what the “Better United States Recipe” needed. What they liked about the recipe they kept, making small changes that they thought would accentuate the product more.

The things that they didn’t like, they made drastic reforms. Basically, what each of the progressive presidents did, starting with Roosevelt and ending with Taft, was build off each other’s ideas and mistakes, all with one goal in mind: make the United States of America the best it can be.

Theodore Roosevelt, twenty-sixth president of the United States, started the progressive ball rolling by making critical changes to issues dealing with the control of corporations, consumer protection, and conservation of natural resources.

These criteria, which were better known by the epithet The Square Deal, were supported by numerous acts and actions on the part of the President and Congress. During this time, Theodore Roosevelt’s enthusiasm for controlling large corporations is best exemplified by the title with which people soon began to characterize the Rough Rider – a “trustbuster”. His first major step towards accomplishing 44 antitrust suits was his 1902 attack upon the Northern Securities Company. The leaders of the railroad empire and “Napoleonic moguls of money” (674), J.P Morgan and James J. Hill, had visions of a monopoly controlling the entire Northwest.

Two years later, and only after an appeal made by Morgan and Hill, did the Supreme Court officially announce the destruction of the Northern Securities. Although Wall Street bankers and big business men were angered by the decision, Roosevelt’s reputation as a trustbuster soared. In 1903, the Rough Rider once again attacked the seemingly corrupt railroad industries with the Elkins Act. No longer could railroads give rebates to shippers, for a promise of heavy fines for both parties were insured. Roosevelt’s first step towards the assistance of the consumer and laborer was demonstrated in 1902 during the Pennsylvania miners versus owners dispute. Neither side was ready to consent to defeat and thus, factories, schools, and hospitals were forced to shut down as the coal supply dwindled. After hearing the arguments of both parties, Theodore Roosevelt set a precedent of using military force to aid labor in their struggle for decent treatment.

Never before had a president recognized the significance of the demands placed on management by labor for acceptable working conditions. This one action paved the way for multiple acts passed in favor of labor, such as the 1903 establishment of the Department of Commerce and Labor. This Rough Rider, “trust busting”, lover of the underdogs president completed the last side of his square with acts such as Newlands Act (1902) and policies such as “multiple-use resource management.” Roosevelt wanted to “use the nation’s natural endowment intelligently” (680), and thus saved what was not essentially needed by loggers, practically 125 million acres. Where other conservation acts had failed, Roosevelt had succeeded and would lead the way for future president Taft, whose conservationist efforts would surpass those of his predecessor. With all that President Theodore Roosevelt did to start the progressivism era, a huge contribution was his power in electing Taft, the twenty-seventh president, who would keep the progress moving.

William Howard Taft spent the majority of his presidency concerning himself with foreign policy and proving to be even more progressive than Roosevelt in terms of busting trusts. Taft was very interested in involving American politics to areas abroad, a foreign policy critics dubbed “dollar diplomacy”. Along with the help of Washington, Taft encouraged Wall Street bankers to invest their superfluous money into foreign areas of strategic concern to the United States, such as the Far East and regions critical to the Panama Canal. Their investments would supposedly “strengthen American defenses and foreign policies, while bringing further prosperity to their homeland- and to themselves” (683). Taft’s “dollar diplomacy”, although not coinciding with the domestic progressivism norm exemplified by Roosevelt, was progressive nonetheless as it replaced the necessity of the big stick.

Not only interested with matters abroad, Taft focused his eyes on the issue that made his predecessor famous, busting the trusts. In all, Taft brought 90 suits against the trusts during his four year term, largely outnumbering Roosevelt’s 44 suit total in seven and half years. Taft’s most famous and publicized antitrust suit was against the U.S. Steel Corporation. This suit also brought the most criticism, surprisingly by Taft’s “creator”, Theodore Roosevelt. Under Taft’s control, trusts were continuously being destroyed. A true protégé of Roosevelt, Taft worked wonders with progressive conservation. Taft established the Bureau of Mines “to control mineral resources, rescued millions of acres of western coal lands from exploitation, and protected water-power sites from private development” (685). While all of Taft’s accomplishments furthered the progressive movement, his platform ideas would contrast with those of his opponents, Roosevelt and Wilson, in the upcoming elections.

Woodrow Wilson entered the White House in 1912 with plans to carry out his election platform “New Freedom”, which stood for small enterprise, entrepreneurship, and the free functioning of unregulated and unmonopolized markets. Unlike Roosevelt, who wanted big business controlled by an equally large government, “the keynote of Wilson’s campaign was not regulation but fragmentation of the big industrial combines, chiefly by means of vigorous enforcement of the antitrust laws” (689). Under Wilson’s New Freedom, he carried out plans to assault what was called “the triple wall of privilege”: the tariff, the banks, and the trusts. The president’s aggressive leadership convinced the House to pass the Underwood Tariff Bill in 1903, which substantially reduced import fees. This bill accompanied by the recently ratified Sixteenth Amendment, allowed revenue from the income tax to shoot ahead of receipts from the tariff by 1917.

By reducing tariffs, Wilson was in effect benefiting both consumer and supplier, which was impossible prior to his term considering tariffs were as high as 40 percent. Wilson focused his next attack on bankers, which resulted in an act that became “the most important piece of economic legislation between the Civil War and the New Deal” (692). In 1913, the Federal Reserve Act came into effect, thus establishing a nationwide system of twelve regional reserve districts, which each issued paper money backed by commercial paper. Roosevelt had pushed towards this accomplishment with his 1908 Aldrich-Vreeland Act, “which authorized national banks to issue emergency currency backed by various kinds of collateral” (681). Trusts and monopolies were hit hard with the Federal Trade Commission Act and the Clayton Anti-Trust Act (1914).

Both acts benefited consumer and laborer, something in which Roosevelt also believed strongly. The Federal Trade Commission Act is strikingly similar to the commission Roosevelt formed to investigate the Chicago meatpacking industry after the scandalous publication of Upton Sinclair’s The Jungle. Wilson continued to help laborers with such acts as the Federal Farm Loan Act (1916), the Warehouse Act (1916), the La Follette Seamen’s Act (1915), the Workingmen’s Compensation Act (1916), and the Adamson Act (1916). Wilson’s predecessor, Taft, also helped laborers, not with numerous bills and acts, but with his support in their use of the organized and peaceful strike. With the many acts that Wilson helped to see passed, he not only accomplished his assault on “the triple wall of privilege”, but also successfully built upon the similar ideas of both Roosevelt and Taft.

Theodore Roosevelt, William H. Taft, and Woodrow Wilson all did their best to use their knowledge of prior successes and failures to bring about as much positive change during their term(s). As many successes as there were, many failures and/or setbacks occurred along the way. For Rough Rider Theodore Roosevelt, he had to carry the burden, blame, and taunts such as “Theodore the Meddler” and the “Roosevelt Panic” during the 1907 Wall Street panic. This did not deter the mighty president as he lashed back at his critics and soon there after made some much needed fiscal reforms. The second progressive president, Taft, had even more setbacks than Roosevelt, often contradicting his viewpoints. With the firing of Gifford Pinchot, who criticized the corporate development of lands in Wyoming, Montana, and Alaska, Taft erased the accomplishments of his Bureau of Mines in the eyes of the public.

In 1909, his signing of the Payne-Aldrich bill, which tacked on hundreds of upward tariff revisions, blatantly betrayed his campaign promises and outraged the progressive wing of his party. All of this, not to mention the complete failure of “dollar diplomacy” in the Far East with the Manchurian railroads, did not hinder Taft to make some of the most radical changes by destroying over 90 trusts. Unlike his two forerunners, Wilson did not have any certain incidents that in any way mired his New Freedom policy.

However, his personality, one of an austere and arrogant intellectual, did not make him the fondest politician in the eyes of the masses. Although not a major concern at the time of the Progressive Era, Wilson was a white supremacist that encouraged accelerated segregation between whites and blacks, instead of fighting for equality. Each president, Roosevelt, Taft, and Wilson, indeed had their complications during their terms. However, each brought about so much positive change exemplified in the numerous acts that are still in effect today, and each led the way for the presidents that would follow in later years, that one could say the years between 1905-1917 were truly progressive. 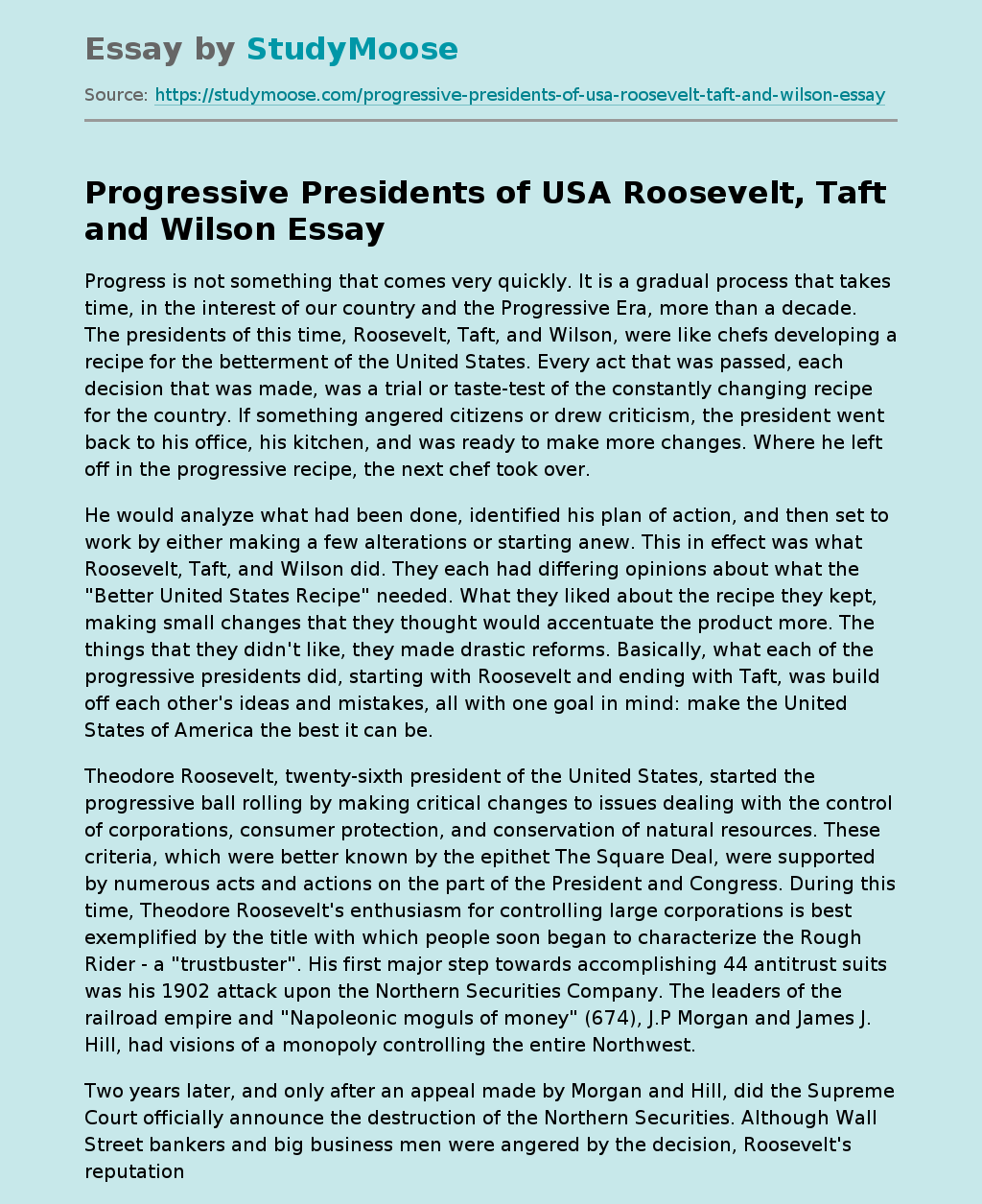