Progress of Agriculture Before and After Independence of India

Agriculture has been the backbone of the Indian economy and it will continue to remain so for a long time. It has to support almost 17 per cent of world population from 2. 3 per cent of world geographical area and 4. 2 per cent of world’s water resources. The economic reforms, initiated in the country during the early 1990s, have put the economy on a higher growth trajectory. Annual growth rate in GDP has accelerated from below 6 percent during the initial years of reforms to more than 8 percent in recent years.

Don't use plagiarized sources. Get your custom essay on
“ Progress of Agriculture Before and After Independence of India ”
Get custom paper
NEW! smart matching with writer

This happened mainly due to rapid growth in non-agriculture sector.

5 per cent is rainfed. The degradation of land and surface as well as ground water resources results in fast deterioration of soil health.

Losses due to biotic (insect-pests, diseases, weeds) and abiotic (drought, salinity, heat, cold, etc. ) stresses account for about one-fourth of the value of agricultural produce. The storage, transportation, processing, value addition and marketing of farm produce need to be improved to enhance household food, nutrition and livelihood security. Indian agriculture is characterized by agro-ecological diversities in soil, rainfall, temperature, and cropping system. Besides favorable solar energy, the country receives about 3 trillion m3 of rainwater, 14 major, 44 medium and 55 minor rivers hare about 83 per cent of the drainage basin.

About 210 billion m3 water is estimated to be available as ground water. Irrigation water is becoming a scarce commodity. Thus proper harvesting and efficient utilization of water is of great importance. Intensive cultivation as a result of introduction of high yielding varieties in the mid 1960’s required higher energy inputs and better management practices. Land preparation, harvesting, threshing and irrigation are the operations, which utilize most of the energy used in agriculture. The share of animate power in agriculture decreased from 92 er cent in 1950-51 to 20 per cent in 2000-01.

For desired cropping intensity with timeliness in field operations, animate energy sources alone were no longer adequate. Farmers opted for mechanical power sources to supplement animate power. Average size of farm holdings gradually reduced from 2. 58 ha to 1. 57 ha (Table 1). Small and marginal farmers have limited resources especially in rain-fed regions where only animate power is used resulting in low productivity. Though agricultural production is high, the per hectare productivity is much lower than world average. There is an urgent need to increase productivity.

Progress of Agriculture Before and After Independence of India. (2016, Nov 17). Retrieved from http://studymoose.com/progress-of-agriculture-before-and-after-independence-of-india-essay 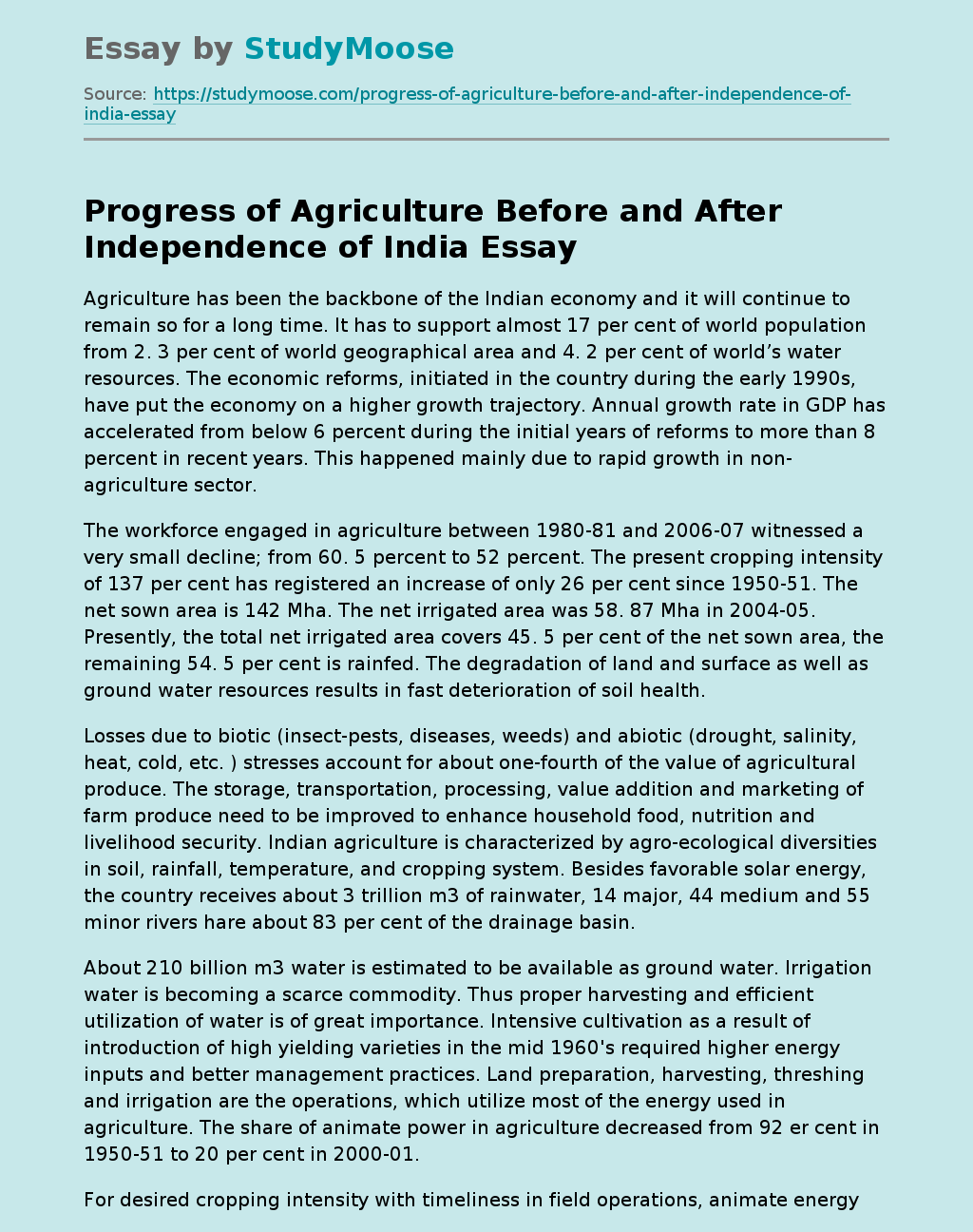