Street crime is – criminal activity that happens in a public place usually in a town or city, for example stealing people’s personal possessions or snatching, vandalisms, theft, physical injury and extortion. Street Crimes are usually committed in outdoors and it can be happen in strange or to an unfamiliar places. It can even take place to your own community. Street Crimes can be done in many different forms such as pick-pocketing, bag, necklaces, earrings and gadget snatching, car theft, motorcycle theft and even hit and run and many other related criminal acts that takes place within a street.

Don't use plagiarized sources.
Get Your Custom Essay on Profiling of Street Crime in Philippines Just from $13,9/Page

(http://www.thepoc.net/thepoc-features/buhay-pinoy/buhay-pinoy-features/15180-how-to-protect-yourself-from-street-crimes.html). These Street crimes are very wide spread in the area of responsibility in of DV-Soria, police community precinct 01. Criminals usually choose to commit these crimes in a specific places and specific times to attack their victims.

Actually, the researcher was a victim of this street crime. Way back then, when he was in high school his class schedule ends at night time and he could still remember the time when he was walking alone along the Velez St. heading home to Capt. Vicente Roa St., there was a group of people who blocked his way and threatened him while asking a big amount of money, but he have nothing to do but to give what he has. Being a victim of Street Crimes is not a good experience, at first it could leave a trauma to the victim such as being afraid to walk alone in the evening especially if there is a group of people gathering to a particular area. Everyone could be a victim of Street Crimes especially all of us go out to our houses.

The researcher decided to pursue the study of street crimes received in police station 01 because it was introduced by his instructor and he wanted to know how it contributes outcome in our community in terms of the percentage of crime volume. The Community Precinct 01 was placed in the heart of the city along Abejuela /T. Neri /Burgos Sts, Cagayan de Oro city. Station is one of the very high populated areas in Cagayan de Oro because of the affordable items in stores and many other business establishments which bring a large number of people to visit the place.

The Police Station No.01 (PS 01), formerly Operation Kahusay ug Kalinaw (OKK), is located at the heart of the city along Abejuela /T. Neri /Burgos Sts., this city, with the boundaries from North – Barangay 17 and 18, South – Barangay 01, West – Carmen River and East – Barangay 03. PS 01 composed of Twenty (20) Urban Barangays from 01 to 20 with a total land area of ninety three point seven hundred twenty five (93.725) hectares. Based on present statistics, it is inhabited by more or less 18,446 inhabitants. Vital installations located in the Area Of Responsibility (AOR), Twenty Nine (29) commercial establishment and Four (04) government banks, Three (03) churches, Fifteen (15) government offices, One (01) water reservoir, One (01) mall, Three (03) communication towers and Four (04) private hospitals..

In the Independent Variables of this study includes the: Classification of Street Crimes Theft / pick pocketing: Is an act where any person taking the property belonging to another person without force or violence. Any person who steals objects or items from the pocket or shoulder-bags of the other person in a public places or of any establishments along the street. Physical Injury: is an act of any person inflecting pain, damage, harm or hurt to another person.

Robbery / Extortion: The act of securing, seeking, money or favors by means of threat, blackmail or intimidation. Hit & Run: It involved in or denoting a motor-vehicle accident in which the driver leaves the scene without stopping and give assistance to the harmed or injured person, or give information to the police. Vandalism: Is an act of a certain person writing the wall or any part of the establishment by use of paint, coal, of any forms of writing instrument by destruction.

In the dependent variables of this study includes the: profiles of street crime victims Profile of Victims: refers to the profile of any person or individual being injured, extorted, snatched, pick-pocketed, and more being stated in the independent variables. Age of the Victim: Refers to the age of the victim during the incident, if the common victims are children, teenagers, adult or even old. Gender of the Victim: corresponds to the sex of any person and which is integrated in this study to see the usual victims of street crimes. MALE: refers to a boy [Masculine]

FEMALE: refers to a girl [Feminine]

This research studied the classification of street crimes from January to December in the year 2011. Specifically, it sought to answer the following questions.
1.What is the most extensive street crime in the area of responsibility in Police Station 02 in the year of 2011 and 2012.
a.Theft / Pick Pocketing
b.Physical Injury
c.Robbery / Extortion
d.Hit & Run
e.Vandalism
2.What is the profile of victims in each street crimes in terms of a.Age of the Victim
b.Gender of the Victim
c.Time of Incident
d.Date of Incident
e.Location of Incident
Significance of this study

The objective of this study is to collect information or data on the classification of street crimes received in police station 02 in the year 2012 and to be a reference of the for future researcher for related studies and compare the volume of street crimes before and nowadays in the record of police stations specifically in station 02, next is to present to the community precinct 02 the exact place and time were a certain crime is over exceeding. PNP Personnel, this study will serve as the basic guidelines of the police personnel to perform their job well and to be more alert to a certain area in a certain time; it will also help them to make plans for their future action in preventing the occurrence of the street crimes.

To Community, On the other hand the police community relation could disseminate the information to its community and make the civilians aware to the existence of such street crime existing to a specific area and time, and to avoid being a victim of it. Barangay Officials, the local government unit will also be alert and Should deploy barangay police to a specific place where a high incidence of street crime is existing in order to maintain the peace and order and prevent those criminal minds in committing such street.

Profiling of Street Crime in Philippines. (2016, Nov 23). Retrieved from https://studymoose.com/profiling-of-street-crime-in-philippines-essay 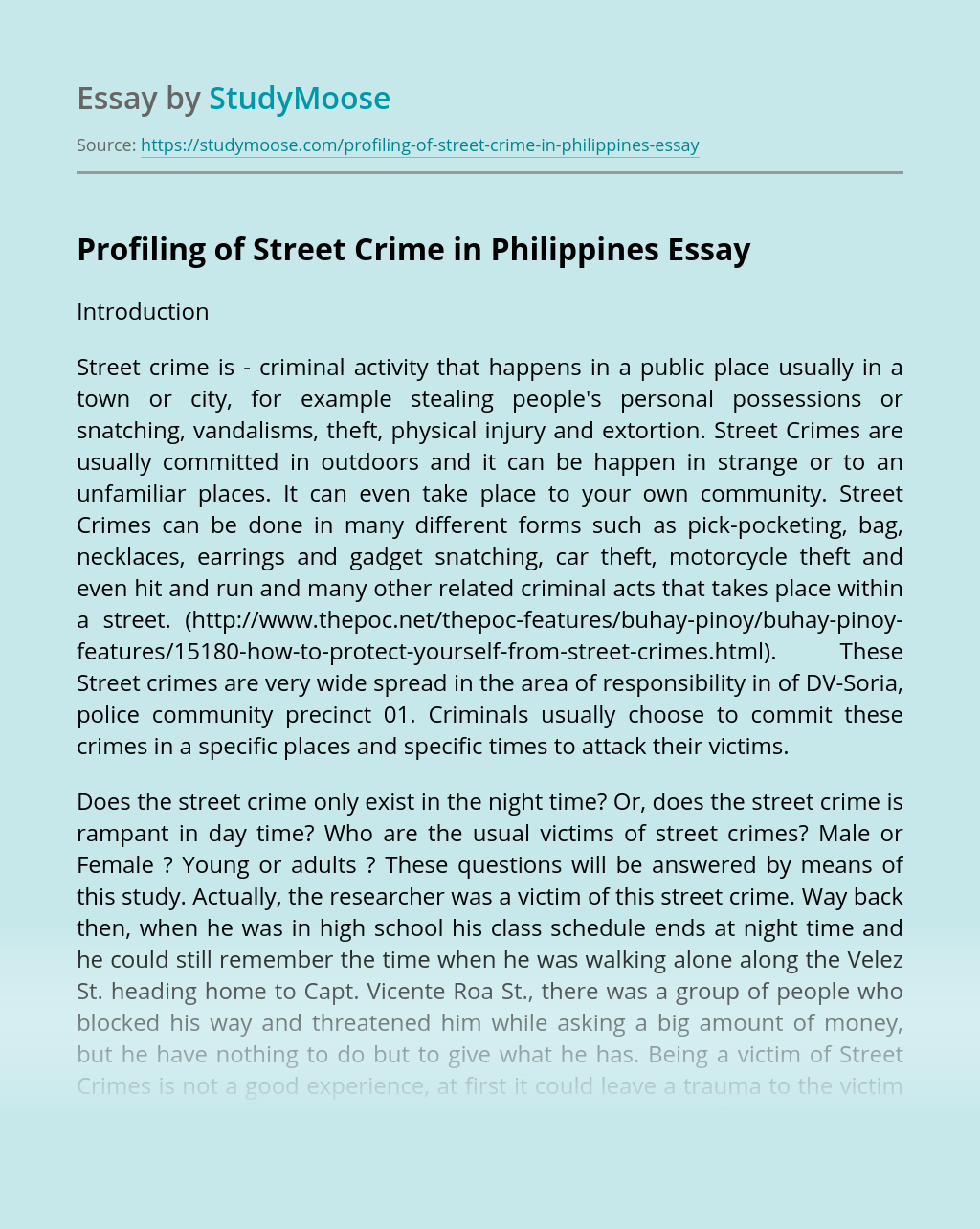