Reaction Paper on Medea by Euripides

What was the role of the nurse in the play? Why did she thinks the killing her children is the best option for her to get revenge form her husband? And how is she going to deal with the pain of killing them.

I did not like the fact that Jason left his wife for another one. He did not obey the commitment he made to his wife and left his family along with his children.

“You know that my lord Jason has left me and made a second marriage, with the bright-haired child of wealth and power.

Don't use plagiarized sources. Get your custom essay on
“ Reaction Paper on Medea by Euripides ”
Get custom paper
NEW! smart matching with writer

I too was child of power, but not this country; and I spent my power for love of Jason. I poured it out before him like water; I made him drink it like wine. I gave him success and fame; I saved him his precious life; not once, many times. You may have heard what I did for him: I betrayed my father for him, I killed my brother to save him; I made my own land to hate me forever.

” – page 18. He didn’t care for his wife who actually left everything for him.

I also did not like the way Medea is someone who does not forgive and forget. She killed Jason wife even though she said she is not jealous of Jason.

“It is not true, I am not jealous. I never hated her. Jealous for the sake of Jason? I am far past wanting Jason, my lord. You took him and gave him to her, and I will say you did well, perhaps wisely.

Your daughter is loved by all: she is beautiful: if i were near her I would soon lover her” – page 23. I felt that she was still angry with Jason and his decision and that’s why she killed all those connected to him to feel relieved.

In this play Medea by Euripides, I like the fact that Jason still loves his family after leaving them. As he said when Medea asked if he still consider them. “Certainly I considered them. It was my hope that they would grow up here, and I, having married power, could protect and favor them. And if perhaps, after many years, I become Dynast of Corinth-for that is Creon’s desire, to make me his heir – our sons. Would have been a king’s sons-I hope to help them wherever they go: but now of course must look forward to younger children.” – page 32. I feel that Jason married to the princess just for the wellbeing of his children. He wanted his children to have a bright future.

I also like the fact that the attitude shown by Medea was not that different from what is felt today by some women. As in the Islamic religion a man is supposed to marry up to four wives. Some women try committing suicide because of that and some even try to make their husband go mad by spiritual means. This makes some of the Islamic country like Africa become worst to stay in it.

Reaction Paper on Medea by Euripides. (2019, Nov 20). Retrieved from https://studymoose.com/professor-frank-p-borrelliintroduction-to-theateraugust-example-essay 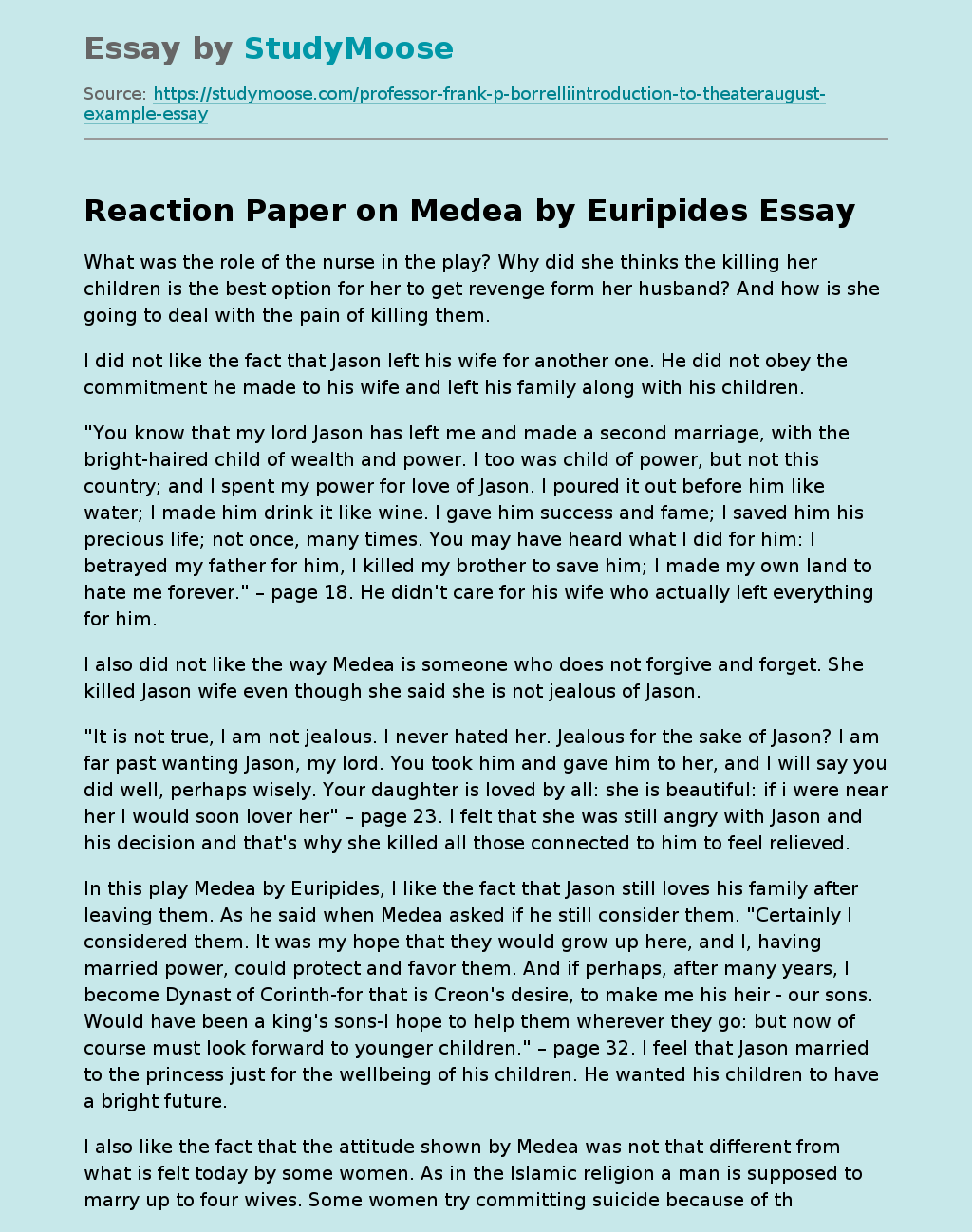