As the book progresses, new characters such as Gilderoy Lockhart are introduced and old characters, from the last book, are reintroduced. Small conflicts are occurring and the mystery is building up. The questions going through the reader’s head would be, “I wonder what the main storyline will be? ” “Who will be the villain this time? ” “Will Voldemort return? ” “Is Harry really in danger? ” “What danger? ” “Lockhart wouldn’t have been introduced unless he was to play an important part, so what part will he play? ” “Maybe Lockhart will be the villain? ” All these questions, all mysteries.

Don't use plagiarized sources. Get your custom essay on
“ Professor Dippet ”
Get custom paper
NEW! smart matching with writer

As in all mystery movies and novels, there is a villain, a main character, a main story line and surrounding story lines. In this case, it is no different. When Harry arrives at the station and attempts to enter platform nine and three-quarters, the barrier will not let him through. Instead, Harry just crashes into it. Someone or something is trying to prevent Harry from going to Hogwarts.

Weasley enchanted to fly, to Hogwarts, and follow the train, which has already left. The car would not be brought into the story for just this reason. It is there for an ulterior motive. The must be some reason that the car is brought into the story, this reason is found later. After crashing the car into the whomping willow, (a tree whose branches flail and beat things), on landing at school, the car takes off into the Forbidden Forest and was thought never to be seen again.

When Harry and Ron “follow the spiders” (a clue left by Hagrid), it leads them into the Forbidden Forest where they are attacked by a friend of Hagrid which just happens to be a gigantic spider. Harry and Ron are surrounded by spiders, which are closing in on them quickly. They believe they are meeting their doom and are about to be eaten. When all of a sudden the car comes out of nowhere and crashes through all the spiders to save Harry and Ron, safely brings them out of the Forbidden Forrest and then turns around and leaves, back into the forest. The mystery of why the car was introduced is solved.

As in all mysteries, clues are given. Some which help and others that do not, but all of which add to the mystery. A clue, which is given here, is the Kwikspell letter that Harry finds on Filch’s (one of the professors and the caretaker) desk while he is out of the room. It is for a correspondence course in beginners’ magic. Harry is reading through the letter when he hears Filch coming back. He quickly stuffs it into the envelope and throws it on the desk. Filch notices that it is in a different position to when he left and gets very flustered and embarrassed, acting as if it was for a friend.

Harry later finds out that Filch is a “squib” (a person born into a wizarding family with no magical powers). This clue is not at all connected to the real crime. Filch being a squib has nothing to do with how or why or by what/who Mrs. Norris was petrified. This however, is a clue worth looking at if it was Harry who petrified Mrs. Norris, like everyone suspected. It just so happens that the people petrified were all connected to Harry in some way. For instance Colin Creevey was petrified and everybody knew that he annoyed Harry and followed him around.

Filch never like Harry and always tried to find a way to punish him which may have given him a reason to harm Mrs. Norris. These clues all give Harry motive, it looks as if it was Harry who committed the crimes. Many people believed this and stayed away from him, but later found out that they had been wrong and that Harry was indeed innocent. Another clue is the voices that Harry hears in the school that no one else could hear. He follows them and looks suspicious about something because he is chasing something that only he can hear. Mrs.

Norris, Filch’s cat, is found petrified and hung up by her tail and writing appears on the wall saying that “The Chamber of Secrets has been opened. Enemies of the Heir Beware. ” Harry, Hermione and Ron suspect that Malfoy is the heir of Slytherin but the story takes a turn when the “polyjuice potion” is created, Ron and Harry take the shape of Crabbe and Goyle (Malfoy’s best friends) and they find out that Malfoy is not the heir of Slytherin and also that he has no idea who the heir is. Both the characters and the reader are now left with no idea who the heir of Slytherin is. There is a ghost of a young girl that haunts the girl’s bathroom.

She is very vulnerable and floods the bathroom when she gets upset. Therefore the bathroom is permanently out of order. This makes it the perfect place for the polyjuice potion to be made. While Harry was in the bathroom making it, he found an old looking diary dated 1950. He had a feeling about it and although he was told it was rubbish kept it nevertheless. When he works out how to use the diary, it leads him down a new path. The diary belongs to Tom Marvolo Riddle. Tom was at Hogwarts fifty years ago, which was the same time of the last attack, so Harry asks Tom about it and he is taken back into Tom’s memory of the night.

When Harry comes out of the memory, he has learnt that Tom thought that Hagrid was responsible for opening the chamber and letting out the monster and by the looks of things, all evidence points to him. So that was the reason he was expelled. Dumbledore thought him innocent the whole time so he persuaded the headmaster at the time, Professor Dippet, to keep Hagrid on as a gamekeeper. One of the reasons Harry kept the diary was because if he could work out how to use it, he might be able to find out what Riddle received his award for special services for.

Sarcastically, Ron says, “Maybe he murdered Myrtle, that would have done everyone a favour. ” When the mystery has nearly been completely solved, Harry finds out that Riddle did murder Myrtle. On Valentine’s Day, Ginny sends Harry a valentine, which is delivered by a dwarf cupid. After Harry’s bag splits in two in an effort to run away from the dwarf and being stopped, Malfoy finds Riddle’s diary. Ginny notices that Harry has the diary and a complete look of terror crosses her face. By the time Hermione worked out what the monster was and how to stop it, it was too late. She too had been petrified.

Found next to her was a mirror. This is yet another clue. The minister of magic, Cornelius Fudge and Dumbledore arrive at Hagrid’s hut not long after Ron and Harry, and tell Hagrid that he will have go to Azkaban (very bad jail). Hagrid says, “If anyone wanted ter find out some stuff, all they’d have ter do would be ter follow the spiders. That’d lead ’em right! That’s all I’m sayin’. ” This is definitely another clue. This point is the climax of the story. From that point on, things begin to unravel quickly. Despite the fact that Ron has an enormous fear of spiders, they take Hagrid’s advice and follow the spiders.

This leads them into the Forbidden Forest, where they meet Aragog, the spider that Hagrid raised. Hagrid raised Aragog, the gigantic spider, when it was a baby and Hagrid was only a young boy. They formed a bond and are still friends. Aragog was mistaken to be Slytherin’s monster and that is how Hagrid was expelled. Aragog claims that he promised Hagrid that he would never kill any human. He claims that he hasn’t broken that promise. This proves that Hagrid is not responsible for opening the chamber of secrets. At that point, Aragog’s children all come and Aragog gives them permission to eat Harry and Ron, but the flying car saves them. 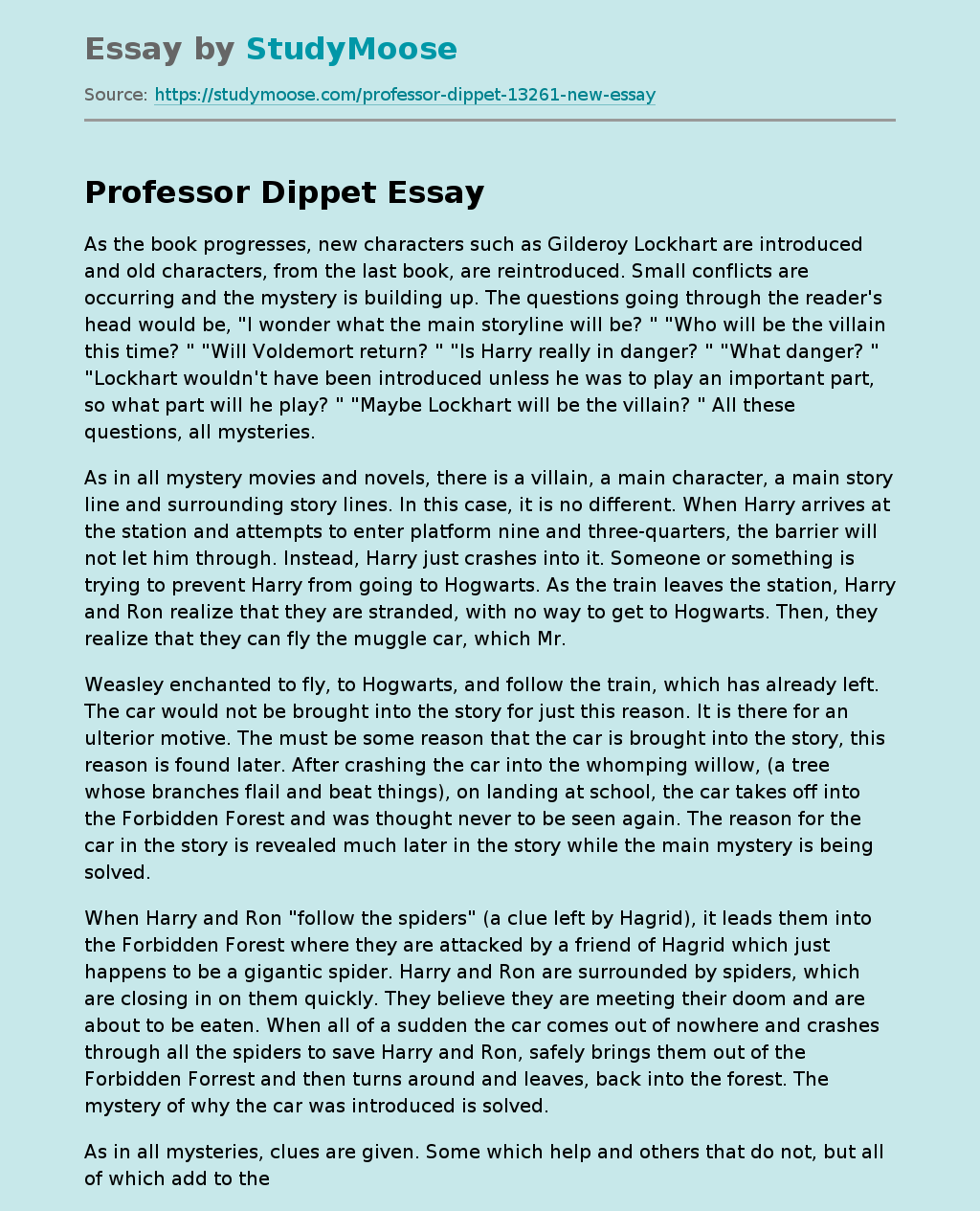