The various kinds of health professionals are educated in separate schools but with considerable overlap in curricula and training requirements. They are, however, expected to integrate their training and work together after graduation. Identify the advantages and disadvantages of this approach to professional education in terms of costs, educational efficiency, and patient care quality. List one advantage and one disadvantage for each.

The structure of the U.S health care system is certainly a topic greatly debated.

Don't use plagiarized sources. Get your custom essay on
“ Professional Development Assignment for a Healthcare Worker ”
Get custom paper
NEW! smart matching with writer

Whether it is discussing the cost of health care, poor outcomes, shortages in health care workers, underutilization of other health care workers, the lack of access to care, or growing demand by consumers for health care that offers choice, quality, convenience, affordability and personalized care. It is not a secret that the United States spends more money than any other nation on health care, but only ranks 34th in the world in life expectancy and has higher mortality rates in infants than any other nation that is developed.

Our health workforce was described as dysfunctional in public and private health workforce policy and infrastructure putting the health of Americans at risk. Could it be the lack of integrated education and teamwork from those that are involved in the care of our patients? Health care professionals are educated in differing schools of thought.

If there were overlapping curricula and raining requirements integrating their training there would be both advantages and disadvantages involved. Physicians, nurses, and other health care professionals ultimately work together with the common goal of serving an individual patient.

Yet few have developed the essential team skills to help them work productively with their colleagues, analyzing outcomes and processes of care to improve continuously, by using each person’s skills to the fullest. To realize these benefits, we need to infuse the value of teamwork into the medical education culture through specific curriculum changes. An advantage to overlapping and integrating training would not only be to benefit, but students from diverse disciplines, such as physician assistant, nursing, and medical students, could take some classes together.

Eventually, this type of broad restructuring would be cost-effective. As a purposefully designed additional benefit, students would learn to know and respect those in other disciplines, fostering teamwork. As students advance, they need to be offered more opportunities to learn and work side-by-side in realistic, interdisciplinary settings. A disadvantage or problem to this topic is the financing of the integrated medical education. Good teaching, whether it is conducted in the classroom, clinic, or hospital, requires time.

Innovative approaches to teaching, progressive skills instruction, multitier assessment, and support of the development of professionalism all require teachers who have the time to observe, instruct, coach, and assess their students and who also have time for self-reflection and their own professional development. Although the educational mission is expensive, many medical schools already possess the funds to support teaching properly, if they choose to use the funds for this purpose (Cooke, Irby, Sullivan, Ludmerer, 2006).

Why Physicians are Poorly Distributed across Different Areas

An oversupply of physicians in many urban regions contrasts with continuing problems of access in rural and inner-city areas. Why does the mal-distribution of physicians persist in spite of the number of physicians graduated?

Access to healthcare in the United States is affected dramatically by where a physician is located. The current misdistribution of physicians, which exists in rural and inner city areas, is of great concern. Out of the 300,000 primary care physicians nationwide, only 11 percent practice in rural areas, making the total number of practicing physicians per person much lower in rural areas compared to urban areas (General Accounting Office, 2003). There are two main measures of medical underservice in the U.S., health professional shortage areas and medically underserved areas and some special need populations. Both measures require communities to apply for designation. These designations allow the government to target resources to those determined to be most in need (Colwill and Cultice, 2003).

There are two principal conditions leading to physician shortages in rural communities according to Wright and colleagues. They are “demand-deficient”, meaning they have insufficient populations and resources to support a physician practice, they are “ambiance-challenged,” meaning they are isolated, lack quality services and amenities, and/or are in geographically unattractive settings, or a combination of the two sets of conditions. Inner-city physician shortages are a more recently recognized issue. They are affected by the same conditions, though the specifics are different (Wright, Andrilla, and Hart 2001). Living in rural Iowa this is an issue and a problem I have seen and experienced far too many times. One example I can think of would be my grandmother was in her seventies and was as spry as she had been in her fifties. She was in charge of anything and everything she could be in charge of. She spent her life working as an administrator in a popular company and was very prominent in her small community. She was popular with her peers and kind to everyone her path crossed.

When she turned 72 she began having headaches. She went to her local small farm town community doctor. He prescribed her “prescription-strength” ibuprofen and told her to slow down. She took his advice and slowed down to the best of her ability. The headaches continued and she returned to ole “doc Jamison” as she would say. When he told her it was stress, she believed him and tried to “de-clutter and de-stress” her life. When that didn’t work she talked herself out of returning because she was embarrassed. He ran no test, he asked few questions, he was a poor communicator, and he lacked resources or challenging cases to compare patients to.

My grandmother died shortly after seeing him of a brain tumor. Another example was my father-in-law suffering a heart attack. He went to the ER in his small community with chest pain. When I arrived he was in the ICU on a nitro and morphine drip. I said, wait why is he still here. He was in pain, on a morphine drip, EKG changes, and receiving nitro. It didn’t make sense to me. The doctor said, “the cardiologist comes on Wednesday”. WHAT? Yes. Small town Iowa was going to hold onto my father-in-law until the cardiologist came two days later. These are only a couple of the thousands of examples of poor care, limited recourses, and limited providers in rural communities.

Pros and Cons of Focusing on Healthy Behaviour

The health care delivery system now places increased emphasis on maintaining wellness and on promoting disease avoidance through healthy behaviors and lifestyles. What challenges does this new orientation pose for our existing system of medical education and training?

In 1991 the Pew Charitable Trusts published a report that outlined what was expected to drive future health care. They concluded that a health-oriented approach that stresses disease prevention would characterize future health care systems. They emphasized, “that health concerns will be addressed at the community level and that medical schools will require that learning in a community environment will be a part of physician training. Physicians will need to be well versed in social and environmental health determinants. Focusing on preventative care and treatment techniques that use technology to the patient’s advantage is the challenge facing the new physician” (Inwald and Winters, 1995).

Medical education does not always go hand in hand with health promotion and disease prevention. The United States ranks poorly to other industrialized countries on most important health indicators. Chronic disease in particular is affecting the nation’s health. Chronic illness, such as diabetes, cancer, and heart disease, and their underlying cause such as obesity and tobacco use, affect more than 130 million Americans (Wu and Green, 2000). Health promotion is not a priority in the United States. “Although practicing preventive medicine is a cost saving mechanism, nationwide we spend most health care dollars treating preventable diseases” (Inwald and Winters, 1995).

In order to improve our nation’s health and spend our nation’s resources most effectively we must put greater emphasis on efforts to keep people healthy as opposed to only treating them once they become ill. Prevention is one of the best ways to help Americans live longer, healthier lives and increase our nation’s productivity. Preventing disease requires more than providing people with information to make healthy choices. While knowledge is critical, communities must reinforce and support health, for example, by making healthy choices easy and affordable. Health care providers should implement policies and systems to support the delivery of high-impact clinical preventive services and enhance linkages between clinical and community prevention efforts.

For example, a health care system can adopt a decision support system that prompts clinicians to deliver appropriate clinical preventive services to patients. Medical students are overwhelmed with the amount of information and classes they have to take. There is so much for them to learn with all of the rotations they have to take. It is important to remember that these students have so many disease processes and pharmacology to learn that disease prevention and health promotion is sometimes not in their realm of thinking. This is why it is important for us to be sure they understand the importance of this topic and for physicians to adhere to the guidelines they are given.

The successful integration of disease prevention and health promotion principles into medical student education does not depend on new curriculum, curriculum coordination and integration, or the use of new educational technology. Ultimately, the academic health sciences centers and schools of medicine must reconnect with the health needs of people, forming alliances with community groups and programs that focus on prevention. This reconnection demands a shift in core institutional values—from the paradigm of healing to the paradigm of health. 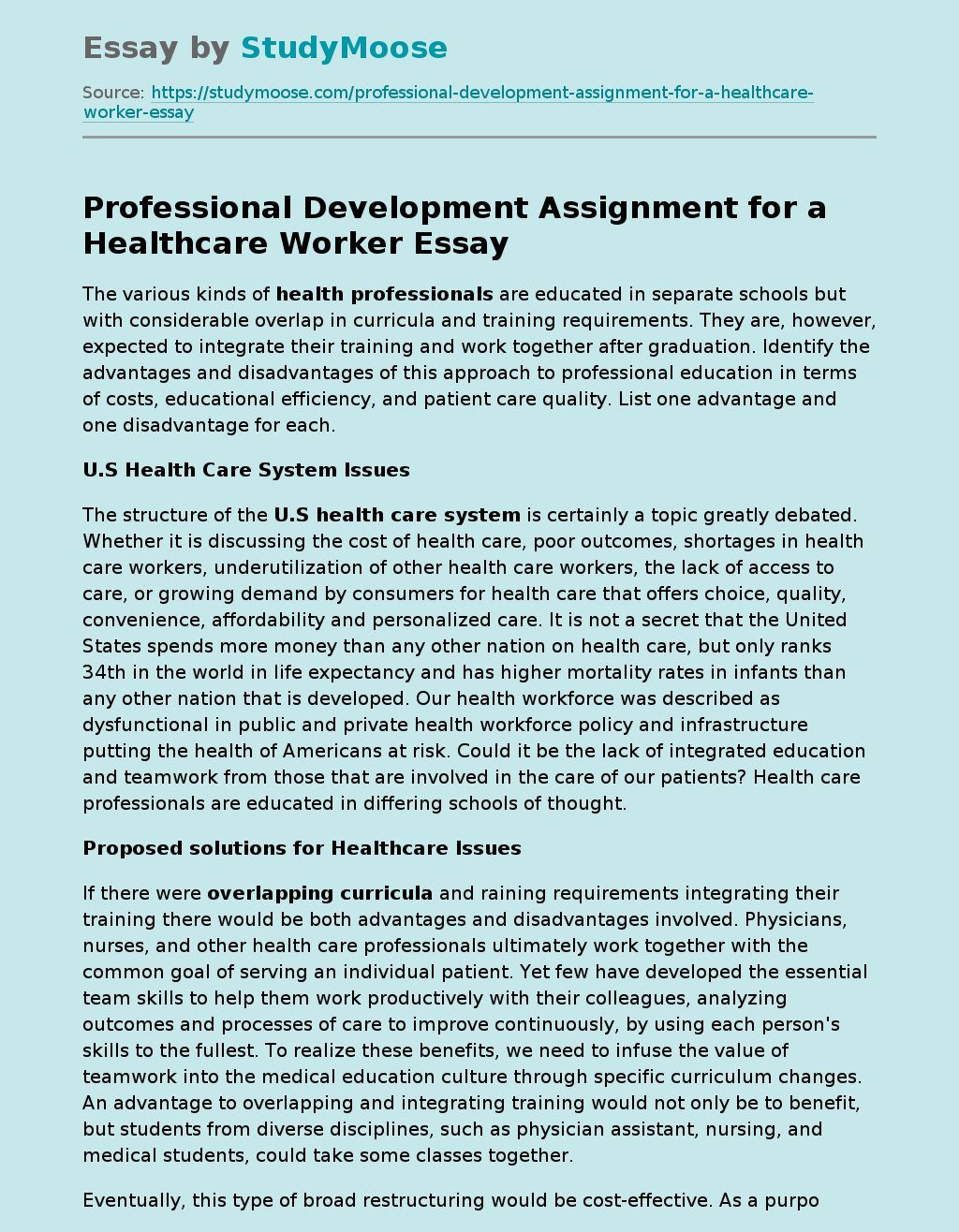